Newsletter
Sign Up today for our FREE Newsletter and get the latest articles and news delivered right to your inbox.
Home
Super Chevy
News

Jegs decides to go-with-the-flow with our next week-long Chevy transformation project starting on June 25th! 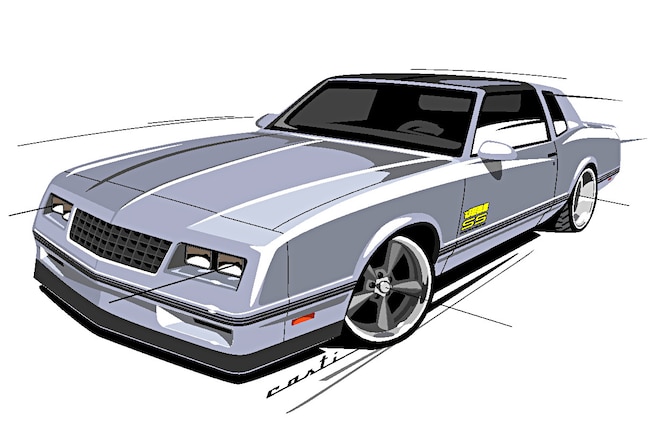 Some cars just exist while others have pretty interesting back stories. A great example of this is the Fourth-gen (1981-1988) Monte Carlo Aerocoupe. This car first appeared in 1986 when just 200 examples were produced. Why so few? Well, back then NASCAR was actually tied to real cars and 200 was the magic number required by NASCAR for a model to be considered a true production car. Based on the Super Sport it had an extremely sloped (25-degree angle) rear window and a shorter trunk lid with a flatter-than-normal rear spoiler. With these changes the shape was much more conducive to slicing through the air at a NASCAR race. The Aerocoupe (also referred to as an Aerodeck) came about due to the racing success of Ford’s Thunderbird (Aerobird) that had been kicking NASCAR backside from 1982-1986.

Dale Earnhardt used the improved design to have quite a bit of success in 1986 and 1987 where he won his third championship with the Wranglers sponsored yellow version. In 1988, befitting his Intimidator nickname, the car was painted black and sponsored by Goodwrench.

While the NASCAR version ruled the track the production version, while cool looking, was hobbled with a 305-inch, 180-horsepower, emissions choked V-8 under the hood. The Aerocoupe only lasted two years with just 200 examples being built in 1986 and 6,052 of them sent to the highways in 1987. By today’s standards the performance numbers were awful. It had a 0-to-60 time of 10.06 seconds and ran the quarter mile in 17.35 seconds at 80 mph. Of course, in the late 80s most cars were slow and this was actually considered high-performance.

That brings to our new project; a 1987 Monte Carlo Aerocoupe in nearly stock condition. It’s obviously been well cared for over the last 30-ish years. The gearheads over at Jegs have always dug these 4th-gen g-bodies and, given their huge warehouses of performance parts, knew that they could get the car’s performance matching its air-cutting good looks.

The Jeg’s Week To Wicked is going to focus on performance, lots of it. The 305 is going away and in its place will be an EFI topped 383-stroker small-block. Given the vintage history of this ride Jegs felt a gen-1 small-block made more sense than a newer LS mill. The stroker will be backed up by a four-speed overdrive trans feeding back to a new posi rear and all the suspension and brakes will be updated from Jeg’s extensive catalog. The exterior already had the look Jegs was going for, so they are keeping it simple with some vintage-vibe rollers, wrapped in stickier rubber, along with a dropped stance in keeping with its aerodynamic roots.

The transformation of this track-inspired Chevy will take place starting on June 25th and proceeding for one very frantic week. So, be sure to stay tuned to www.superchevy.com and our various social media channels for live videos and build progress updates.

We recap day 3 (Wednesday) of our Week To Wicked project on a 1987 Monte Carlo SS Aerocoupe. We’re at the wiring and plumbing stage and we also go about tackling the cooling system, dropping in a bleeding edge EFI system and even updating the Monte’s broken audio system.

We recap day 2 (Monday) of our Week To Wicked project on a 1987 Monte Carlo SS Aerocoupe. We continue to install the brakes, but the main event is prepping our ATK 383 small-block Chevy and Jegs 4L60 transmission for install.

We recap day 1 (Monday) of our Week To Wicked project on a 1987 Monte Carlo SS Aerocoupe. After stripping off all of the old parts we start bolting on performance goodies from Baer, QA1, Currie, and Unisteer.

Introducing a brand-new GM High-Tech Performance G-body project car from the actual purchase and inspection. Stay tuned for more as this 1987 Chevy Monte Carlo SS gets EFI and boat loads of budget upgrades.

What the General couldn’t do in ’87, Darrell Hyde added today in his 1987 Chevy Monte Carlo SS. Click here for more details or check out the October 2012 issue of Super Chevy Magazine.

What the General couldn’t do in ’87, Darrell Hyde added today in his 1987 Chevy Monte Carlo SS. Click here for more details or check out the October 2012 issue of Super Chevy Magazine.