Newsletter
Sign Up today for our FREE Newsletter and get the latest articles and news delivered right to your inbox.
Home
Super Chevy
How To
Project Cars 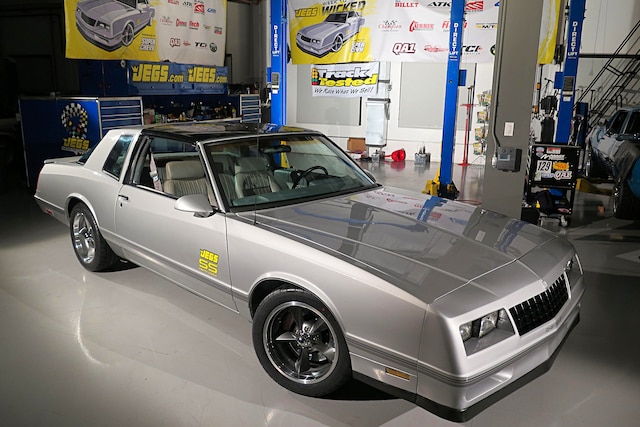 For those that might have missed all the web coverage, we started this Week To Wicked build with a bone stock 1987 Monte Carlo SS Aerocoupe from Jegs High Performance. What’s an Aerocoupe you ask? Well, G-body fans already know, but for the uninitiated this car first appeared in 1986 when just 200 examples were produced. Why so few? Well, back then NASCAR was actually tied to real cars and 200 was the magic number required by NASCAR for a model to be considered a true production car. Based on the Super Sport, it had an extremely sloped (25-degree angle) rear window and a shorter trunk lid with a flatter-than-normal rear spoiler. With these changes, the shape was much more conducive to slicing through the air at a NASCAR race. Dale Earnhardt went on to successfully race this Chevy for years. Aside from the 200 examples built in 1986, GM also churned out just over 6,000 examples in 1987. After that the Aerocoupe was discontinued.

Nothing on the car we started with helped with performance, but the biggest culprit was the anemic 180hp carbureted 305-inch engine. And that 180 number was pretty optimistic in terms of our 30-year-old G-body. The mushy suspension, vague steering, and mediocre brakes took a lot of fun out of driving the Monte. So, on Day 1 we removed all the worn, tired, and underperforming parts from the SS and started with a clean sheet of Chevy sheetmetal.

This cool ride belonged to Jegs so the performance fix was easy. Every part we needed for this week-long transformation came from Jegs and what showed up included both name brand parts and Jegs branded offerings. Like any build, we had to adapt and overcome, but the overall process was drama free even if it did require a few late nights in our tech center.

It was a long build process, but once we heard that stroker V-8 rumble to life and saw the car move under its own power, the long days were completely worth it. So, follow along and see how we transformed a sluggish G-body into something more in line with its NASCAR-inspired styling. We’re just going to touch on the big items, but if you want a complete rundown of all the parts, including fittings and specialty tools used for this build be sure to visit www.jegs.com/week-to-wicked.

The Jegs 1987 Monte Carlo SS Aerocoupe that was sent to us for the transformation was pretty clean, and while it drove OK the handling was mushy and the horsepower was MIA.

Jegs worked with artist Micheal Castiglione to nail down the aesthetics of the SS. The goal was to drop the stance with a QA1 suspension kit (PN 122-HK03-GMG1) along with Jegs rollers and raise the performance with a stack of speed parts.

When new, the 305 V-8 was rated at 180 hp, 30 years later it felt like it was making considerably less. The maze of hoses and wiring created a cluttered mess that was going to soon be a distant memory.

Halfway through Day 1 and we had all the old parts blown off of the SS. The odometer said the Monte only had 22,000 miles on it, but the condition of the parts made us feel that number may not be totally accurate.

The first new part to go onto the car was the Currie 9-inch rear and some of the QA1 suspension parts sent to us by Jegs. The Currie piece can be ordered direct from Jegs by using the dropdown menus to choose various options.

As that was going on, Tech Center Manager Jason Scudellari started bolting on the front QA1 coilover suspension and hanging the massive Baer 14-inch rotors and 6P calipers (PN 136-4301395 front and 136-4262149 rear with custom black ice finish). The stock braking on the Aerocoupe was “meh” at best, so this will be a great option.

By the end of Day 1 we had all the new suspension installed along with the four wheel disc brakes. We felt pretty good, but we also knew we had a ton more to get done in the next four days, including upgrading the steering to a rack-and-pinion system from Unisteer (PN 668-8012400-01).

After installing the All American Billet serpentine drive system (PN 011-FDS-SBC-201), we lowered the new engine and trans into our ’87 Aerocoupe.

With the engine installed we could start plumbing in the new brakes, including this sweet Baer Remaster master cylinder (PN 136-6801274LP). Its integrated adjustable proportioning valve saved us time, but we still needed to tie it into the Monte Carlo’s existing lines.

To cool our ATK small-block, Jegs sent over a Champion Cooling Systems aluminum radiator and fans (PN 166-CC162) made specifically for our G-body. This unit was paired with an aluminum overflow tank from Canton Racing Products (PN 074-80-2188BLK).

Day 3 was all about wiring and plumbing, including this FAST EZ-TCU transmission controller from Jegs (PN 244-30282-KIT). To get the electronic signal from the modern transmission to the 1987 speedometer we used a TCI Speedometer Control Drive (PN 890-377300).

In addition to the transmission controller we also had to wire in the electronics for the FiTech EFI system and finish the ignition system, which included a Jegs SSR-III RTR Pro-Series distributor (PN 555-40520). To dress everything, we opted for Jegs finned aluminum valve covers (PN 555-501101) and air cleaner (PN 555-500055).

Old-school looks combined with modern performance sums up the FiTech EFI system sent to us from Jegs. Sitting atop a blacked-out Jegs Champion Series dual-plane intake (PN 555-513003) the FiTech unit will give us huge driveability benefits. The system uses a Go EFI Fuel Command Center 2.0 unit (PN 546-40004) that works with the small-block’s mechanical fuel pump to feed the throttle body petrol at the required psi. It’s a sweet system that didn’t require us to remove the stock fuel tank.

Thursday was consumed with hundreds of tasks, both small and large. From installing the Jegs header-back 2.5-inch stainless exhaust system (PN 555-30525) and mating it to the Patriot Exhaust Hi-Temp Coated headers (PN 737-H8021-B) to, you guessed it, more wiring.

By the middle of Friday, 99-percent of the parts had been installed and it was time to start getting the ’87 SS ready to hit the road again. After adding all the various fluids, Tech Center wrencher Christian Arriero dialed in an alignment good enough to take us down the road without chewing up the fresh Mickey Thompson Street Comp tires (PN 672-6273) on our Jegs Old School 17x8 wheels (PN 555-681640).

We didn’t do much to the interior, but one thing we did do was to toss the broken aftermarket head unit and install a RetroSound Newport 1.5-DIN direct fit unit (PN 700-NEWPORT). It added a lot of modern features, such as iPod control and Bluetooth, while keeping a factory look.

It was zero-dark-thirty on Day 5 when we put the finishing touches on our Jegs 1987 Monte Carlo SS Aerocoupe, such as these pieces from Phoenix Graphix, and prepared to fire it up.

The key turned and the reborn Monte Carlo roared to life! After chasing down a couple of leaks and fine-tuning the FiTech EFI system, the SS was rumbling smoothly and ready for a few passes around our parking lot just to make sure everything was good to go. While the Aerocoupe didn’t change a ton in terms of looks, the transformation in terms of performance was nothing short of amazing and makes the ’87 worthy of its NASCAR heritage.

More on our Week to Wicked 1987 Monte Carlo Aerocoupe Build!

We recap day 3 (Wednesday) of our Week To Wicked project on a 1987 Monte Carlo SS Aerocoupe. We’re at the wiring and plumbing stage and we also go about tackling the cooling system, dropping in a bleeding edge EFI system and even updating the Monte’s broken audio system.

We recap day 2 (Monday) of our Week To Wicked project on a 1987 Monte Carlo SS Aerocoupe. We continue to install the brakes, but the main event is prepping our ATK 383 small-block Chevy and Jegs 4L60 transmission for install.

We recap day 1 (Monday) of our Week To Wicked project on a 1987 Monte Carlo SS Aerocoupe. After stripping off all of the old parts we start bolting on performance goodies from Baer, QA1, Currie, and Unisteer.