Newsletter
Sign Up today for our FREE Newsletter and get the latest articles and news delivered right to your inbox.
Home
GM High Tech Performance
How To
Engines & Drivetrain

Bolt On Supercharger for Your 2016 SS Camaro

Power Boost: Up the power on your 2016 Camaro’s LT1 with a ProCharger P-1SC-1 supercharger 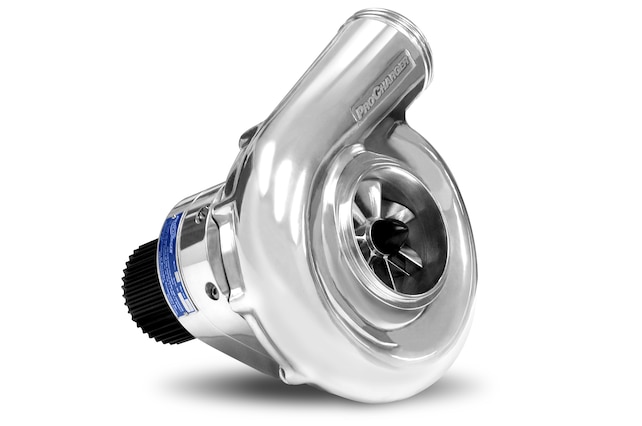 OK, you have a new Camaro and while it’s fast you just want “a bit more power.” Fine, we’re the same way so we totally get it. But how to get there? Sure, you can add 5-10 hp here and there with things like a cold-air kit or headers. Or, you can tear into your brand-new engine and get more with a lumpy cam. But there’s a better way: boost. Yep, the quickest way to get the biggest jump in power output is to stuff more atmosphere into your engine. Once you’re in this mindset there are three basic categories: turbos, roots blowers, and centrifugal superchargers. All have their own fan bases, but for this exercise we’re going the centrifugal route. Why? Well, they are simple to install, make killer power, and don’t suffer heat issues like some other systems.

In the case of our 2016 Camaro, the P-1SC-1 kit from ProCharger is about as simple of a bolt-on deal as it gets. The system is air-to-air intercooled, so no messing with fluids or electric pumps. The self-contained oiling design means there’s no need to add oil lines or punch holes in the oil pan. And, in the case of the Gen6 Camaro, the fuel system is so good that you don’t even have to touch the fuel injectors or pump. This keeps the price down a bit and cuts installation time.

As mentioned before, the 2016 Camaro kit is built around ProCharger’s P-1SC-1 blower. In addition to the internal oiling, which only requires oil changes every 6,000 miles, the P-1SC-1 features an internal step-up ratio of 4.10:1 for better belt tracking, belt traction, and improved low-rpm boost. The entry level P-1SC-1 features a billet impeller and gear cases just like the high-power models. Lastly, it’s easy to upgrade to the D-1SC or even the F-1A-94 series down the line if you decided you want even more power. Thanks to ProCharger’s bracket design, no GM OEM parts, other than the airbox assembly, are removed. This really helps simplify the install and the whole kit can be installed in around 6-8 hours using fairly basic tools. To check out this new kit we headed over to ProCharger to follow the install on one of their customer’s Camaro SS.

01. The install can be done on the ground, but since we had a lift we opted to use it. First up was removing the stock parts, namely the factory airbox and tube. The manual from ProCharger is very detailed, and in color, so this article will touch on the major parts of the supercharger install.

02. The factory MAF needs to be removed from the airbox since it will be reused later in the tubing supplied by ProCharger.

03. The front bumper has to come off, but it’s a lot easier than you might think. You’ll need a Torx bit for this.

04. Pulling the front wheels off makes this part easier, but you could just turn the wheels to access the bolts. There are a lot of fasteners, many of them 7mm, so follow the manual to make sure you get all of them.

05. The nose is then removed (after unplugging the harness) and set aside. This will give us room to tackle the intercooler install. We also removed the driver-side headlight.

06. Next, the driver-side auxiliary radiator is relocated to allow more room for the system’s tubing. For maximum hp potential the ProCharger system uses massive 3- and 3.5-inch tubing.

07. ProCharger’s patented crank pulley design allows for the supercharger to have a dedicated drive system, without the hassle of pulling the factory balancer. Thankfully, starting with the LT1 GM now pins the crank from the factory so we can skip that step on these new Gen6 cars. The ProCharger crank pulley works by using a system of “cam-locks” to securely grip the factory balancer, taking the load off the crank bolt. Once in place, the pulley was torqued to spec.

08. The PCV system was then hooked up, this gave us a location for our bypass valve and boost gauge.

09. This is the CNC billet aluminum bracket, with heavy-duty tensioner, that will soon hold our supercharger on this LT1 engine. This customer opted for the polished finish. ProCharger offers finishes such as polished, satin, and black, or, as you will see later, you can do your own custom finish. The tensioner system has been proven to support over 1,300 hp, so handling the 7 psi this system puts out is no problem at all.

10. The billet bracket dropped in place like it was designed by GM. No drilling was required and we didn’t have to relocate anything, such as the ABS unit, etc.

11. Then it starts getting fun since this is where the P-1SC-1 blower gets put into the mix. This is a very popular blower and is a staple for making big power on modern engine platforms such as the LT1. ProCharger also allows for upgradability since a D-1SC will easily bolt in place of the P-1SC-1 just in case the owner needs “a bit more power.” (Keep in mind that the P-1SC-1 has powered modified street cars into the low 9s). Even the F-1A series will bolt to the same main bracket.

12. After filling the blower with oil from the pre-measured bottle provided by ProCharger, the unit was bolted to the main bracket using the supplied fasteners.

13. The beltdrive is a direct drive, meaning a very short belt runs just the supercharger without having to turn any other goodies such as the A/C or alternator.

14. To get the massive Stage Two air-to-air intercooler in place, we unbolted the front bumper support.

15. This kit features a large air-to-air intercooler that takes the air charge from the P-1SC-1 and cools it down even closer to ambient temperature. This creates a more dense air charge and results in better performance. With no moving parts such as pumps, or relays or coolant it makes for a simpler way to make more power.

16. And here’s how the intercooler looks bolted in place and with the front bumper support reinstalled.

17. Hooking up the charge tubing, using all the included clamps, couplers, and tubing was a breeze. Remember, there are variances from car to car, so each coupler can be trimmed to fit if needed.

18. The bypass valve is easily installed and connects right to the intercooler endtank. The job of the bypass valve is to dump the excess pressure when you lift off the throttle, or are driving around under normal driving conditions. If you want louder operation, then just remove the filter on the end. ProCharger includes this filter as a sound muffler for those that don’t want to hear it. Also, if you want less blower whine, ProCharger offers a “quiet” or “reduced noise” version (helical gears along with a few other design tweaks) for an extra $100.

19. Finally, we are connecting the most interesting tube the supercharger world has ever seen. This hose is made from rugged, five-ply silicon. This has some major advantages besides looking cool. First, it is an insulator, and helps keep engine bay heat from getting to the air charge in the tube. Secondly, it fits like an absolute glove even in the tight area under the headlamp. Thirdly, it won’t rattle or squeak. Fourth, the MAF is inside the tubing, which makes for very consistent tuning. And finally, since it’s one long piece, there are less couplers to come apart.

20. All the hard work is now done, so it’s time to start putting the nose back together starting with the driver-side headlight.

21. A blower has to breathe so next up is installing the air inlet system, which includes a high-efficiency filter.

22. With that, everything under the hood is done. The install was surprisingly easy and the best part is we didn’t have too many of the common tasks like changing out fuel injectors. This is a project you could easily knock out in a day, and not even a full one at that.

23. With the parts installed it was time to use the included SCT handheld to install the ProCharger-provided supercharger tune. The SCT programmer is menu driven and very straightforward. ProCharger also recommends that quality boost and fuel pressure gauges be installed, since both of these tidbits of info are critical to keep track of. They also point out that running spark plugs that are one heat range cooler than stock (gapped to 0.035-inch) is a good idea. The handheld also lets you data log the car’s systems.

24. And with that it was time to hit the Mustang chassis dyno to see what we gained.

25. Of course, after numbers wouldn’t tell us much without some baseline pulls, so before we started we ran the stock Camaro on ProCharger’s Mustang dyno where it put down best numbers of 420 horsepower and 401 lb-ft of torque. That’s on the high side of what ProCharger has seen from other new LT1 Camaros.

27. Remember when we mentioned custom finishes? Well, ProCharger offers three, but many of their dealers can hook you up with more. This red kit was put together by House of Boost and looks killer in the red SS.

28. The great part about superchargers is that your Camaro will still look, and idle like, stock. Of course that stock charade will vanish once the throttle is mashed.

Don't miss out on this handbuilt LSX 454 Engine that is neck and neck with the performance of a factory crate engine.

This 2012 Chevrolet black Camaro SS built by Erick Hemphill was worth saving up for.

We put the Straight Line Spotlight on a truly creative 2010 Chevy Cobalt, a 2012 Chevy Camaro, and more drag cars!

The recently completed 2012 Camaro Super Stocker is but the latest example of quality craftsmanship to come from the highly reputed Phil Mandella Racing shop.

We put this 2012 Chevy Camaro SS project on a diet and add some serious Corbeau seats worthy of thiis car's high g-force capabilities! Check out the install!

This 2012 Chevrolet Camaro ZL1 is seeing red on track thanks to a bolt-on suspension upgrade from BMR Suspension. Check out the install and test drive!