Newsletter
Sign Up today for our FREE Newsletter and get the latest articles and news delivered right to your inbox.
Home
Chevy High-Performance
How To
Chassis Suspension

“The Fridge” Goes COPO: Bagshaw Hot Rod Fabrication updates the famous The Fridge Camaro with a COPO rear suspension and a few other improvements 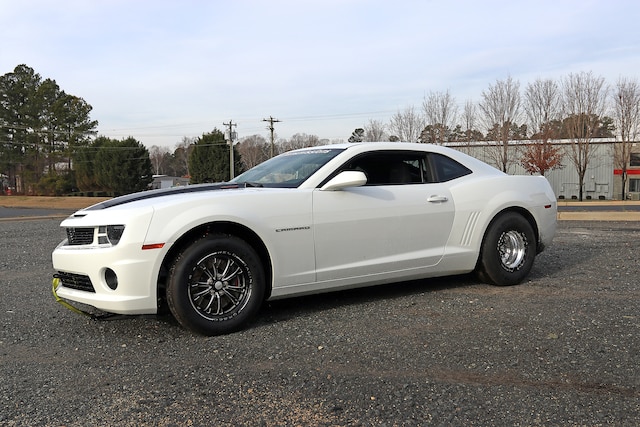 If you are a fan of great Camaros, or just drag racing in general, then you are probably already aware of the white ’10 Camaro affectionately known as The Fridge. Originally owned by RPM Transmissions out of Anderson, Indiana, and built as a house car to race utilizing the company’s products, the white Camaro was at one point the fastest full-bodied ’10 Camaro with an 8.943-second blast at 158 mph. And on an independent rear setup, no less.

But time marches on and things change. Eventually, the crew at RPM Transmissions felt the time was right for The Fridge to move to a new home and sold it. That’s why we were surprised when we stopped by the Bagshaw Hot Rod Fabrication shops in Mooresville, North Carolina, and saw The Fridge being prepped for some serious updates. Shop owner Scott Bagshaw says that the car arrived at his facility stripped of the entire drivetrain as well as the rear suspension. He’s been tasked with converting the car to a solid rearend setup more like a modern COPO Camaro.

It turns out that you can actually order the same components that come on Chevrolet’s impressive COPO Camaros. Bagshaw says the owner wanted the COPO’s rear suspension and rearend, but he still wanted to keep the Camaro streetable. The COPO, straight from Chevrolet Performance, is a full-blown race car that’s been stripped to the bone. The Fridge, on the other hand, has always kept the street car aesthetic, complete with a full interior, including the back seat.

Keeping the back seat was an issue because the original COPO Camaro design uses braces from the upper bar mounts that extend through the rear seat floorpan and connect to the rollcage. Obviously, these braces are right where the rear seat would normally go. To get around this, Bagshaw made a few modifications to the COPO design, and we think the results are pretty trick.

When Chevrolet Performance first took on the task of figuring out exactly how they wanted to build and sell COPO Camaros for Stock Eliminator competition, they turned to race car builder Mike Pustelny to come up with a rear suspension design that would be competitive but also acceptable by the NHRA. Pustelny obviously did a great job, given the COPO’s success on the track, and he still plays a role with these cars. All the components for this conversion were purchased from his MPR Race Cars outfit in Almont, Michigan.

By the way, if you would like to turn your own fifth-gen Camaro into a COPO race car, Chevrolet Performance has published a book outlining the steps required to build a COPO clone. The build book is appropriately titled COPO Build Book, and it’s available from any Chevrolet Performance retailer as well as Amazon.com. It’s packed with tons of interesting information and a pretty neat read even if you have no plans to build a COPO yourself. CHP

1. Years ago, The Fridge was one of the fastest stock-bodied fifth-gen Camaros—even with its independent rear suspension. But now it has a new owner who wants a COPO-style solid axle rear suspension along with other changes. Fabricator Scott Bagshaw handled that project with a few upgrades, and here are the results. You may notice the front end is sitting a bit high; that’s because there’s no engine or transmission.

2. The Camaro arrived at the shops of Bagshaw Hot Rod Fabrication in Mooresville, North Carolina, on dollies because the existing rearend had already been stripped. Of course, receiving an already-stripped car means master fabricator Scott Bagshaw could get right to work.

3. By the time we arrived at Bagshaw’s shop, he had already begun preliminary work on the COPO suspension installation. Here, you can see the upper bar mounts have been mocked in, but otherwise everything else on the underside of the car is untouched so you can get an idea of the starting point.

4. There’s no way we have the space to show you every step to build your own COPO Stock Eliminator, but there is a great resource out there that can. In fact, Bagshaw even referenced it for this build. This full-color book, appropriately titled COPO Build Book outlines step-by-step everything required to build a complete COPO race car.

5.This is the floorpan underneath the rear seat. The owner wanted to keep the Camaro’s rear seat intact, which isn’t possible the way the original COPO Camaros are built. They use support bars that brace the upper bar mounts against a rollcage bar just behind the driver’s seat. To allow the rear seats to remain, Bagshaw came up with the system you see here. When the driver drops the clutch, the rearend will try to rip the mounts right from the car. The upper brackets (which are welded to the upper crossmember you can see here and extend through holes cut in the stock sheetmetal) are braced by two pieces of tubing each that attach to 1/8-inch thick reinforcement plates welded to the sheetmetal structure of the car.

6. Here’s a look at the underside of the car with the brackets and their supports welded in place. The upper mounts have an additional 1-inch bar welded in, while the lower brackets triangulate with two bars welded to more 1/8-inch reinforcement plate, along with being welded to the framerail. Notice also that part of the car’s original framerail had to be shaved away and replaced just above both lower brackets to create additional clearance.

7. A closer look at how Bagshaw anchored the new mounts to the car.

8. Chevrolet Performance had Mike Pustelny of MPR Race Cars design and test the COPO Camaro’s rear suspension. He came up with a system to replace the factory IRS that both worked and was most likely to be accepted by the NHRA for Stock Eliminator competition. The sway bar mounts to the floor of the car using two spherical bearings. The bar itself is 1.25-inch chromoly tubing with 0.095 wall thickness.

9. The crossmember that’s located just above the original IRS must be cut back to create clearance for the live axle rearend to move through its travel. Here, Bagshaw begins removing metal with a cutoff wheel.

10. Bagshaw uses 18-gauge sheetmetal to fabricate the new bottom for the crossmember.

11. Here’s the completed work. As you can see, you just need to cut the crossmember down to approximately the same level as the bump-outs just in front of it.

12. Finally, we are ready for the live axle rearend to go into place. It’s a fabricated Strange Engineering 9-inch, and the brackets and mounts arrive already welded into place specifically for this setup.

13. The axles Bagshaw is going to stuff into the rearend are also from Strange Engineering. They are beefy 35-spline Pro Race Hy-Tuf pieces of a special low carbon steel alloy that makes them extremely durable.

14. Bagshaw has the rearend in place and hanging from fabricated struts that he’s bolted in where the shocks will eventually go. These bars are also useful because they will keep the car at ride height once it is on the ground. Notice the fixed-length lower bars are also already in place. They are 20-inches long and made from 1.75-inch diameter chromoly tubing with 0.083 wall thickness.

15. While the lower bars are fixed length, the uppers, which you can see here, are adjustable so you can dial in the correct pinion angle. They are constructed from 1.25-inch, 0.095 chromoly.

16. The straight Panhard bar locates the rearend laterally. In this photo you can also see the bolt-in buckets for mounting the coilover shocks that will soon be installed in place of the fabricated struts.

17. This is pretty cool. In the previous photo you can see a short piece of tubing extending down on the right side of the car. On the left side, the Panhard bar mount actually goes around this short piece to both strengthen the mount and properly locate it.

18. The lower shock mount is adjustable in terms of height. This is a great feature because it allows you to adjust the spring height on the shock purely for traction at the dragstrip.

19. The sway bar attaches to the rearend with these 6-inch links.

21. And here’s a look at the four-piston machined calipers. New brake lines still need to be fabricated for the car, so the calipers will stay in their boxes until this is done later on.

22. The car is far from complete, but the suspension is in so it’s ready to go back to the customer. The brakes, shocks, and other components will be added at another location.

23. Here’s a cool trick that we spotted at Bagshaw’s shop we wanted to share with you. The center chunk and gears will be installed in the rearend later, but the car needed to be a roller. If you roll a car around without the axles supported by the bearings in the centersection, the axles can flop around inside the housing and damage themselves as well as the outer bearings. So Bagshaw uses a short piece of tubing as a sleeve between the axles to keep them from flopping around. The tape is just to keep the sleeve from sliding to one side or another. Now the car can be rolled around the shop or even tied down on a trailer without hurting anything.