As factory performance started to stir from its Malaise Era hibernation, Chevrolet decided to crank out some track-ready Camaros 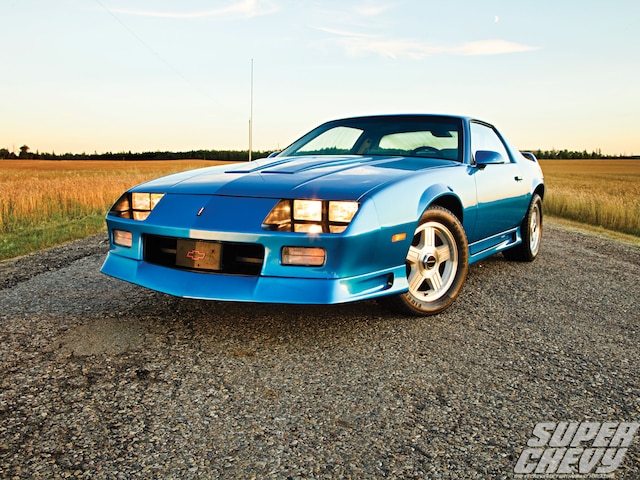 On the heels of the '12 COPO Camaro drag cars being released by GM, it's a good time to look back at some of the factory racing pedigree that spices up the Camaro's history. It's easy to remember the first-gen Z/28s and their dominance on the SCCA circuit, and the '69 ZL1s and COPO iron-block 427 cars that were fixtures at the dragstrip. What many don't know about were the factory-built 1LE cars from 1989-92.

The SCCA had created the Showroom Stock Racing series for such factory-built cars, and north of the border in Canada, Motorsports Division Players Challenge/GM Motorsports Race Series took advantage of this. Order code R7U took the 1LE-prepped Camaro, and added a hand-built LB9 305 (205 hp in 1992), special heavy-duty five-speed manual trans, and a performance chip for the TPI-equipped engine computers. Each engine was dyno tested at the factory after assembly, and then the bolts were paint-marked to note it was a sealed piece.

The Camaros were assembled in Van Nuys, California, alongside sibling Pontiacs. The interiors had certain options declared verboten to make installation of roll cages easier and keep weight down. To help promote the series, Chevy made them so drivers/owners could use them on the street. The series raced at road courses across North America, and after each season the cars could be sold and used as regular street vehicles, so each year a new Camaro could be ordered by the racers.

Our feature subject was one of only 30 built for the last year of the Canadian racing series, but it never made it to the track. Tom Hollinsworth has owned a variety of classic Chevys over the years, but it was his son's passion for third-gen F-bodies that got Tom interested in the 1LEs. He also had friends who raced in the Players Challenge series, and had some personal knowledge particular to the Camaros built for the series.

While cruising the Internet one day, Tom's son came across the Medium Quasar Blue '92 for sale. It was in pristine condition, having never been raced, and still had all its original documentation. It didn't take long for a deal to be struck, and the car came home to Tom's collection. Only five out of the 30 built in '92 were painted in Medium Quasar Blue, giving it rarest of the rare status. Since GM of Canada keeps detailed records on all vehicles sold in the Great White North, Tom was able to further verify the lineage, including that it was the first 1LE/RU7 Camaro built in 1992.

Tom gave us a chance to climb behind the wheel and experience just how good the Camaro felt at the 2011 Edmonton Super Chevy Show. With only 52,000 miles on the clock, the F-body was tight, and drove like brand new. The torquey 305 and five-speed felt great, and there were none of the usual squeaks and rattles we're used to when driving well-worn third-gens (especially those with T-tops). Back in 1990, Editor Campy strip tested a new 1LE IROC at Raceway Park in New Jersey, where it ran 14.6 at 94 mph. It was amazing on the Lime Rock Park road course, too, the best handling and braking F-body to that point.

These 1LEs could be bought for less than $20k. While they don't boast high horsepower numbers, they'll be remembered for relative simplicity, affordability, and connection to the dawn of the new performance era.

If you've got a tech question for our resident Bow Tie Guru, we'll tell you what you need to know to keep your Chevy running right in our Techin' In With Fletch column. Go ahead and send us your questions, we'll give you the skinny on how to prep, maintain and beef up your Bow Tie!

Move over first-gens. This month we're giving the third-gen Chevy Camaro's some love in the Resto Shop department.

We give a T-top third-gen Camaro some much needed stiffening and rear-suspension improvements with help from UMI Performance. - Super Chevy Magazine

Check out this 1992 Chevrolet Camaro RS. Read more only at www.chevyhiperformance.com, the official website for Chevy High Performance Magazine!

Check out this 1992 Chevrolet Camaro that has a 370cid GM LQ4 block, AFR heads, and a Twin Turbonetics GTK-600. Read more only at www.gmhightechperformance.com, the official website for GM High-Tech Performance Magazine!

Check out this 1992 Chevrolet CMC2 Camaro that features a 1994 LT1 motor, Koni adjustables, and more. Read about it only at www.gmhightechperformance.com, the official website for GM High-Tech Performance Magazine!

Read all about Danny Judski's 1992 Chevy Camaro Z28 with has a Procharged 383 Chevy small-block. Only at www.gmhightechperformance.com, the official website for GM High-Tech Performance Magazine!