This 1957 Chevy Bel Air Was Junk Once, But Look At It Now 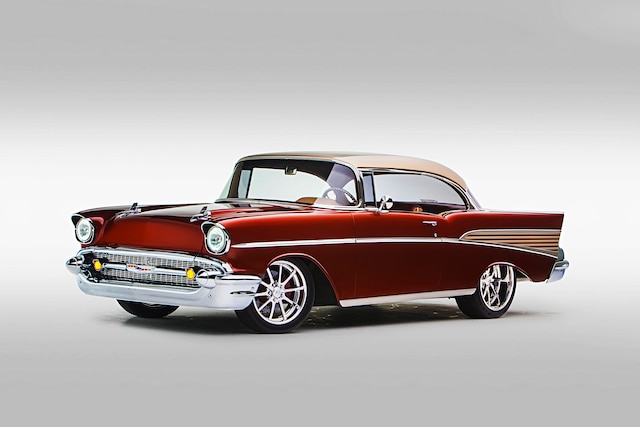 The name of Don Evenson's 1957 Chevy is spelled out phonetically on the rear tag. WUZJNK. Those six letters tell the whole story of what Don's Tri-Five was like when the project began, but the part of the story before that, and the part after that, is a little longer.

Don traced the car's heritage and discovered that his Chevy, one of 166,426 Bel Air hardtops produced for the '57 model year, was built at GM's Los Angeles plant in Van Nuys. It ended up in Big Bear Lake, a mountain town east of L.A., where the dry air and altitude protected the car from the rust that's common near the beach.

Don had been driving a Viper when his wife Cynthia gave him the Bel Air as a Christmas present in 2010. The Chevy had been in storage in Big Bear Lake, but had been discovered by a good friend of the Evensons named Vincent Borzillieri. The Bel Air was a shell showing every sign of long neglect—with a coating of patina over the Surf Green paint—but the body was intact, including almost every piece of stainless and chrome trim. That was good news to Don because his plan for the car was to keep the look of a '57 Chevy, even after a full rebuild. He started discussing his plans with Vincent who, in addition to being a friend, is a professional car builder and the owner of J.V. Enterprises, in Azusa, another L.A. area city.

Don noted that Vincent is good at building two kinds of cars—traditional hot rods and high-horsepower street machines. Don's idea for the Bel Air was somewhere in between. "I wanted to build something bad *ss, but I wanted it to look like a '57 and drive like a modern Cadillac," he said. As he explained to Vincent, "If Cynthia won't get in it and drive it to the store, I'm going to sell it."

The build started off with an emphasis on ride quality. An Art Morrison Enterprises frame forms the foundation for the stout Kugel Komponents front and rear independent suspension. The rear includes heavy duty round tube control arms, a four-link, panhard bar, and anti-roll bar, plus dual coilovers on each end. The 3.55:1 gears in a limited slip differential turn aftermarket Corvette axles. The frontend is suspended with tubular A-arms and coilovers, with an anti-roll bar to firm things. A chromed power rack takes the effort out of turning corners. J.V. Enterprises built the pedal assembly for the brakes. Wilwood 13-inch vented front rotors with 6-piston calipers and Corvette 12-inch drilled and slotted rear rotors with 4-piston calipers are controlled by an ABS electric power master cylinder and booster.

As with many Tri-Five builds, the exterior sheetmetal is untouched. Aside from quite a bit of repair, the changes are subtle. The hood lettering and "V" emblem were removed, but the distinctive bullets were kept. Side letterking and ornamentation was also removed. The wipers were eliminated and the rear bumper was customized with a Nomad center section.

Don said that it seemed like every '57 Chevy he saw at that time was either red or blue or bright yellow, none of which he wanted for his Bel Air. He wanted to keep the classic two-tone look, but finding the right body color to contrast the cream-colored top was the single hardest decision of the whole project. A lot of time was spent testing and rejecting different colors. Then in 2011, the new Bentleys were available in a Burnt Orange metallic that Ron knew would look great on the Chevy. House Of Kolor came up with a similar custom Kopper mix, spiked with some metallic to make it pop, and the paint was sprayed at J.V. Enterprises. Instead of using the factory rear quarter inserts that came with the car, Don and Vincent decided to paint that section with horizontal stripes in using four different colors.

Picking the perfect wheels was another process of elimination. The choice was narrowed down to three different Billet Speicialties models . Vincent's vote was different than Don's, but after polling four or five friends, who all agreed with Vincent, Don agreed on 20- and 18-inch Turbines from the SLC Series—wrapped with 255/45R20 and 235/45R18 Goodyear Eagle LS2 tires. He says the classic looking 10-spokes get a lot of compliments, and the only time he regrets the choice is when he has to polish them.

The exterior reflects J.V. Enterprise's knack for traditional style, but the engine (like the chassis) reflects a taste for high-performance. The engine bay was treated to custom sheetmetal before getting packed with an LS376/480 crate engine. This is Chevy Performance's hot rodded version of the LS3, with an aluminum block, aluminum L92-style heads, 10.7:1 aluminum Hypereutectic pistons, and long-duration LS Hot Cam. Chevy's dyno results for the engine show peak horsepower of 495 peak torque at 473 lbs-ft. Turn Key Engine Supply in Oceanside, California, machined and assembled the engine. J.V. Enterprises built the custom cold air induction and the custom exhaust system that connects ! 3/8-inch headers to 2 1/2-inch exhaust pipes with MagnaFlow mufflers. The shop also built the 3-pass aluminum radiator. RPM Transmissions in Azusa supplied the 700R4 that feeds torque to a driveshaft from General Driveshaft Service.

Inside, the car looks exactly like what a 1957 Chevy interior would look like if it had been designed in the 21st Century. The full-wrap dash is instantly recognizable, but the imitation leather and burl wood make it contemporary. The gauges are from Classic Instruments' Nostalgia VT series. A Vin Tec steering wheel from Billet Specialties sits on a tilt shifter column from Racing Power Company. J.V. Enterprises used three tones of leather to upholster the BMW X5 seats, panels, and custom console—and suede for the headliner. Brown square weave carpet covers the floor. Climate control is managed by a complete Vintage Air system, and audio is provided via a Kenwood receiver and amps and Pioneer speakers. EZ Wiring made it simple for J.V. Enterprises to connect all the components.

Today, it's hard to believe that the car called WUZJNK ever was junk. Now it's a fun, comfortable, reliable rod that scores high points in the looks department and the power department. It looks like a '57, drives like a Cadillac, and is equally fun whether it's cruising down the the street to the store or down the highway on an awesome adventure.