This track-only 1966 Nova was revamped into a street monster!

How can you go wrong with a blown, big-tire Nova? You can’t! 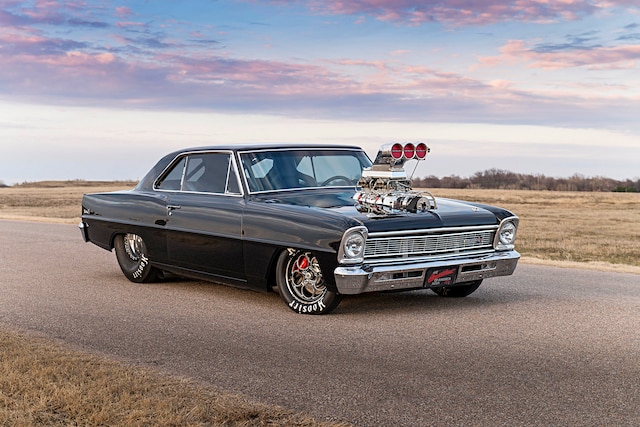 While he negotiated the ups and downs of childhood, one particular experience stuck out to become the guiding light for Kansas native Rick Plush. At the tender age of 5, Rick's father brought home a brand-new 1970 Chevelle SS 396, and the muscle car hook was set for life. Ever since he reached the age when he could start to fill his life with Chevy power, Rick has done so.

Over the years, Rick has owned many, many high-end cars. The original car in his stable was—yep, you guessed it—an all-original, numbers-matching 1970 Chevelle. He completely disassembled it and restored it to perfection. But once it was done he felt like he couldn't enjoy the car. Driving it and modifying it was out of the question due to its heritage and the fact that any changes from stock would hurt the car's value. Eventually, it ended up sitting in the garage for a few years. That car was finally sold off and he started down the path of acquiring cars that strike his fancy for one reason or another. Today, he owns nine super Chevy machines, one of which is the Big & Ugly, big-tire 1966 Nova seen in these pages.

Each car in his collection is in a different stage. His other 1967 Nova, a small-tire, small-block blown car, is in the middle of a restomod build. And since he sold off the numbers-matching Chevelle, he picked up a non-numbers-matching '70 Chevelle that he can play with. There's also a '69 Camaro that was built from the ground up, and yet others which don't get much use, like his 2010 Camaro SS ZL1, which sits on the lift with just 3,200 miles, 1,300 of which were put on during the drive home from Green Bay, Wisconsin, where he purchased it. Half of his daily driver time is spent behind the wheel of a two-door '99 Tahoe, which his parents bought brand-new. The other half of the driver duties go to his 2006 Monte Carlo SS, which sports the front-wheel-drive 300-horsepower LS2 engine under the hood.

Not long after buying his first LS-powered, second-generation '67 Nova five years ago (which was featured on the cover of our sister mag Chevy High Performance), Rick decided he wanted something different—a car with a blower on top of the engine. Not a centrifugal supercharger unit like a ProCharger or a modern TVS-style supercharger, but a real, honest-to-goodness, roots-style blower complete with a big injection hat sticking out of the hood. There's nothing quite like the sound of a rowdy supercharger sucking down massive quantities of alcohol. I think we can all agree on that, yes? "I fell in love with the Pro Street stuff. I wanted a blower motor that surged and whined. I just loved it. An older buddy of mine had a '62 Nova with a blower motor in it, and basically he was in his 60s and was tired of driving around an old car with a blower motor with no air and everything else," Rick says.

A conversation at a car show turned into the opportunity Rick was looking for, so he got to wheelin' and dealin' one of his cars from his collection. That's what Rick does. He acquires cars in which he has an interest, then starts down the road of fulfilling his vision ... which is how this car ended up in his collection.

"I traded him my '02 Anniversary Camaro for the '62 Nova big-tire car with the blower motor built by Advanced Racing Engines out of Salina, Kansas," says Plush. "I was going to put the blower motor into my '67. I tried to advertise the '62 as a roller, put it on eBay, and nobody wanted to buy it as a roller. They wanted the complete car. So I decided not to break it up, put it on eBay complete and sold it in two hours. Then I went in search of a blower motor car, and I really wanted a big-tire car. I came across this car here, which is—as far as I'm concerned—the best of all the worlds," he explains.

Even though much of the '66 Nova seen here was built by the previous owner, Rick took it home and has been putting his stamp on it since the beginning. "The guy who owned it before me ran a dragster, and basically, he bought this as a novelty to race in between his dragster passes," says Rick. "His buddy built the blower motor for it and they put it in and they made one pass with it before the buddy passed away from complications from diabetes. Then the car sat, and it sat, and it sat."

It was in amazing shape when he picked it up, with a fully powdercoated tube chassis and many other custom touches, but it was a full-on race car, which is the furthest thing from Rick's intended usage. The bones were there: the steel body panels; the steel factory dash; the superbly crafted tube frame chassis; the 582ci Dart Big M-based aluminum big-block engine; and the Ford 9-inch rearend housing, complete with Mark Williams third member and 40-spline axles. And perhaps the most enticing part, according to Rick: its low, wide stance, which he says is just about perfect.

With a vision fresh in his mind of what he wanted the Nova to be when complete, Rick has worked with several friends—and a wallet set to take some abuse—to develop the car and fulfill his big-tire, big-blower plan. The first move was to drop it off with friend Pat Sullivan, who stripped out all of the wiring and completely rewired the car to be street legal, including setting up the headlights, taillights, turn signals, and other street-going gear. Chris Carlson of Chris Carlson Hot Rods fabbed up a new hood for the car, setting it up to be contoured to the shape of the blower, along with tuning up the body and paint.

"I brought it home and put in new gauges, gauge bezels, carpet, nice leather racing seats, door panels, smoked glass, and billet window cranks. I then put new Wilwood red brake calipers and rotors, and finished off with a new set of Weld Racing Magnum wheels and Hoosier street tires," Rick says. The final touch to the engine's appearance came in the form of an Enderle Big & Ugly injection hat atop The Blower Shop's overdriven 8-71 supercharger.

Ken Mull built a new transmission crossmember and shifter stand while Flip Williams of Flip O Matic Racing built the Turbo 400 transmission, which uses a Neal Chance converter and manual valvebody. The point of using this transmission was to replace the Powerglide that came with the car and to help make it more streetable. Kevin Kieser of Kevin's American Muffler built a custom exhaust to help with ground clearance using 2.5x4-inch oval tubing and a set of Spintech mufflers, which provide a unique sound that complements the blower's whine.

Over the first summer showing the car, Rick found that running the car on C12 race fuel wasn't exactly cost-effective, and after consultation with Chris Lovett of Wichita Dyno he made the switch to E85, which required a new pair of carburetors and some time on the dyno to refine the tune-up. In addition, Corey Conyers of Crown Customs built a new, larger fuel tank to help contain the extra E85 that's needed for those long summer cruises.

With an estimated 850 horsepower, the Nova makes enough power to rattle the windows and shake the ground. The blower produces 12 psi of boost to go along with the 8-71's signature whine, and Rick's project gets closer to the finish line every day. Good old American hot-rodding rules say that a car is never truly complete, and in the case of Rick Plush's Nova that's exactly the case. And after listening to him talk about its virtues, we doubt this one will be on the trading block any time soon.