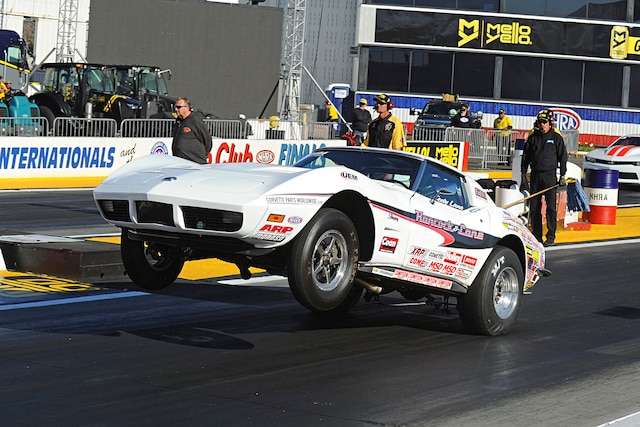 Literally From The Ashes
After working very hard to design, construct, and debut a 1973 Corvette during the latter part of 2017, Cody Lane and his father, Jeff, suffered a monumental setback. While en route to the 2018 NHRA Winternationals in Pomona from their base in Seattle, their towing rig caught fire, which did major damage to their racing operation, including this potential-rich Stock Eliminator Corvette. However, the super-talented and determined group would not be deterred. They just went to work, and, with partners Corvette Parts Worldwide, rebuilt the Corvette back to its original intention and specs. The car was back at the dragstrip during late summer in 2018. After a strong event showing during the 2019 season-opening NHRA Winternationals, Cody raced his car all the way to the winner's circle at NHRA's subsequent national event held in Phoenix—most certainly a deserving reward. Originally, this Corvette was a street car then converted to Stock by Jeff Cunningham. But now within the Hancock & Lane team fold, it is a D/SA car. With an in-house 350ci engine (additional help from Joe and Al Sorensen) the Corvette is capable of 10.7-second elapsed times. Expectations are now high that Cody's Corvette will be a very strong division and national championship contender.

Cool Blue
James Perrone (Shirley, New York) is the owner of a couple of Chevy Nova race cars. Chevy High Performance was particularly impressed with both the fit and finish and excellent maintenance of his 1969 model, which races in Stock Eliminator as a G/SA. After acquiring the Nova in 2003, James, along with Wayne Hopkins and Charlie Hardison, went to work rebuilding the car to its stunning present form, which features paint by Al DeRosa. This high-flying Nova features a 450-horsepower 350 engine built by Brian Tilburg. James utilizes a transmission program by Scott McClay. Perrone is a frequent runner within Eastern NHRA class racing as well as at East Coast Stock/Super Stock circuit events. This '69 has a best time of 10.87 to its credit and is also a multi-time class winner. When not in this Nova, James grabs the keys to his other car—an equally well-prepped Super Stock (SS/GA) 1967 Nova. Support for his team comes from a range of sponsors and friends, including Mickey Thompson Tires, Select Performance, McCormick Racing, Mad Hawaiian Racing, Firematic Supply, and Joe Lisa, Kevin Hawkins, Pat Glade, Joe Reinwald, and his wife, Karen Perrone.

A Long-Time Joint Venture
One of the most identified and longest-running cars anywhere within NHRA's Competition Eliminator ranks is the 1992 Camaro owned and raced by the father and son team of Jim and Ryan Warter, based out of the Pacific Northwest (Olalla, Washington). Incredibly, this Camaro (currently configured for F/SM) has been at the dragstrip in this eliminator category in various configurations for 28 years and counting. Originally driven by Jim, Ryan began driving the car in 2011. In its present form, the race team employs a high-winding 300ci small-block Chevy built by Pan Handle Performance in Texas. That engine, which produces about 830 hp and is shifted at 10,500 rpm through a clutch and Liberty five-speed, has propelled the car into the low 8.6-second zone at over 160 mph. Over its lifetime and with both Jim and Ryan driving, this Camaro has frequented many NHRA final rounds (both national and divisional races) and has set official NHRA records 50-plus times!

Stout in Super Gas
Lake Havasu City, Arizona, is home base to a terrific and highly competitive Super Gas 1967 Camaro owned by Mike Boehner. This car has an interesting history as it was originally raced by Mike's father way back in 1982, when Mike was only 5 years old. The family sold the car to a friend in 1988 before buying it back in 2004. Then, in 2009, Mike purchased a banged-up former Jerry Haas Pro Stock chassis, which he and Doug Schneider repaired and to which they then fit the original Camaro body. The newly configured car and chassis debuted in 2014. For his primary Super Gas (9.90 index) class target, Mike uses a 582ci engine built by Sureway Engine & Machine in Kingman, Arizona. This is a Dart block engine with Brodix Big Duke heads and a Moroso dry-sump system. Sportsman guru Gary Stinnett did the team's carburetor and throttle stop system. This is a very fast Super Gas car with terminal speeds often near the 170-mph mark. Mike has some nice accomplishments, too, as he finished Number Two in NHRA Pacific Division 7 Super Gas championship points last season. Mike receives valued backing from his sponsors K&N Filters and Goodyear Racing tires, as well as unwavering support from his wife, Gillian, who drives her own Chevy-powered Super Comp dragster.