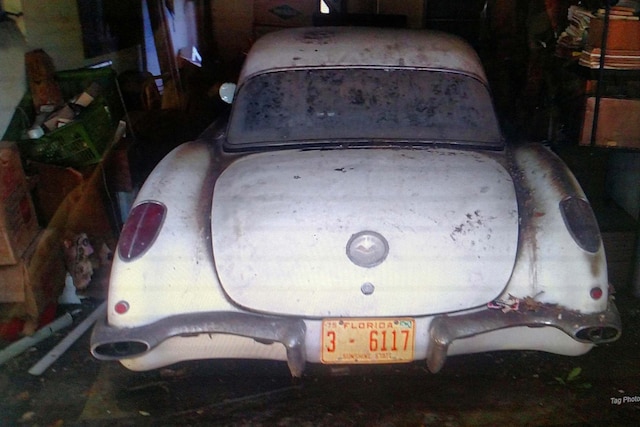 Is there such a thing as "carma?" There is karma. James Ranahan worked for Whitley Chevrolet in 1976 in Tampa, Florida. He was looking for a project Corvette and guess what he found?

In a warehouse in Tampa he found a 1960 model that, "All it was, was a body and a frame, and it took me probably a year, a year and a half, to find everything I needed to put it back together."

James drove and drag raced his 1960 model. But, with his family growing and his wife pregnant, he wound up selling the Corvette. For more information, you can catch James at the end of a movie titled "The Quest," which is the story of finding the Briggs Cunningham #3 1960 Corvette that won LeMans in 1960.

Yes, the 1960 model from 1976 was that historic racer, except James did not know, and neither did the man he sold it to. James would have to wait more than 30 years to find out this legacy.

Meanwhile, he wanted one last 1960 model to restore. He had given up his hobby shop where he worked on his Corvettes, but no matter. He had the skill and the room to do one last car at home; one last car, oh boy. The catch is, he was looking for a specific model year, a 1960, which certainly makes sense.

Wonder of wonders, his friend, Mike Hooker phoned him one day about an old Corvette hidden away in the single-car garage of an old house in the downtown area of Tampa.

Apparently, a pool company on Dale Mabry, a well-traveled thoroughfare, had expanded and bought two houses behind their building. In one of the houses, they found a 1960 Corvette, white with a blue interior.

The 91-year-old original owner, Andrew Young, was still alive. He ordered it for his wife in 1959 from a Chevrolet dealer when he lived in the Carolinas.

This 1960 Corvette was outfitted with the base 230-horse 283 backed by a Powerglide automatic, which would be perfectly suitable for James' wife. The original owner had purchased this 1960 Corvette for his wife almost 60 years earlier.

James Ranahan got the chance to buy this 1960 Corvette, stored in this single-car garage in Tampa, Florida, for 45 years, stretching back to the time he found another 1960 model in a warehouse in Tampa. He noticed the serial number, 1601, which he said, "makes it a very early November (1959) build."

James Ranahan was elated with his latest 1960 Corvette find. He said, "It's still got the inspection sticker (dated 1974). I have the plates. I have every registration from the day he bought it, right up to the last one."

James suspects they sprayed undercoating on the chrome to preserve it.

Who would have known the garage on the side of this house in Tampa, Florida, hid a 1960 Corvette for 45 years?

James Ranahan is debating whether "go for Bow Tie" in the NCRS, leaving the car all original, or restoring and making the car beautiful again.

Incredibly, the hardtop had been on the car since new, close to 60 years. The convertible top's vinyl was aged and cracked. Inside, James was amazed that the cigarette lighter had never been used and nothing had ever been put in the ashtray.

The harder you drive your Chevy the higher the reward, but the risks go up as well » Read More
Church Boys Racing Blends Technology and Style Into the Perfect Nova » Read More
1957 Corvette Barn Find