Introducing a Classic 1958 C1 Corvette into the New Millennium

An artistic amalgamation that blends modern upgrades with classic lines 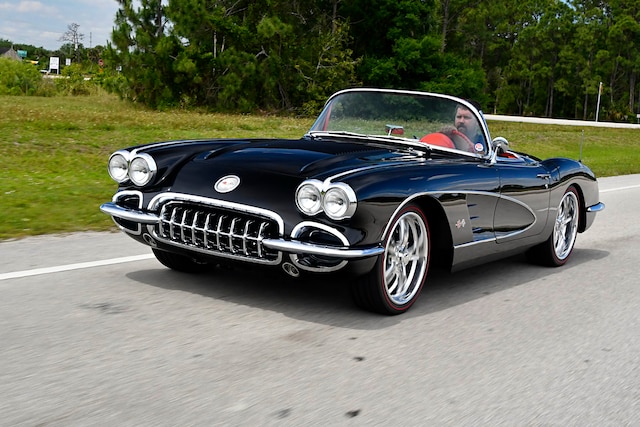 Since the goal for every restomod build is to treasure the old but infuse with the new, the transformation needs to be handled with care. What to keep and what to discard become vital decisions that spell the difference between tears of joy and just plain tears. If the process is beyond your skill level, choosing the right shop is a critical step since the effort must be a fusion of ideas between owner and builder to achieve the best of both worlds.

Matt Verzi and Gavin Broome are the owners of StreetHeat Customs, a build shop in Melbourne, Florida, known for turning out high-end cars and trucks. With 30-plus years of combined experience, they've had more than a dozen magazine feature vehicles and a long list of satisfied customers driving their cars on streets as far away as Australia. While patina cars and trucks are their specialty, they took on a new challenge with this 1958 Corvette. Owned by Debbie Bull from Melbourne, Florida, the car was destined to be a Christmas present from her husband. Unfortunately, it needed some work before it could be wrapped with a big red bow.

When the StreetHeat team began their initial assessment, they learned that the car, equipped with a 283 V-8 and four-speed, had been professionally restored to original factory specs back in 1992. Unfortunately, it was the originality of the car that was the problem. Although they were never designed to be a predictable A to B transport or any young driver's first car, the Corvettes of the late '50s were perfect sports cars for their time. With the passage of time however, expectations change. Judged by modern standards, the team felt the car had a harsh ride, poor handling qualities, skinny tires, and weak brakes common to rides boasting more than 60 years in their pedigree. The advancement of engineering and access to modern aftermarket options was too compelling to ignore, especially since the car was destined to be a gift. Major revisions would be required before it would be responsive in today's high-speed environment. The task for StreetHeat was to transform it, making it safe and easy to handle without disturbing its nostalgic charm.

Since performance and handling are the foundation that dictates everything else, frame and suspension selection is paramount. The right aftermarket chassis automatically solves a wealth of problems since it retains all the things that make a classic Corvette what it is while dispensing with outmoded technology. The Roadster Shop Fast Track Corvette chassis was the perfect starting point with its perimeter frame that uses CNC-cut rails that are boxed, notched and TIG welded for strength. It features Corvette C6 spindles, Delrin bushings, splined steel sway bars, a tubular front end and a four-link rear along with a list of Roadster Shop proprietary additions. It was the right solution for the Corvette's ride problems.

The team requested that the chassis arrive in bare metal since they planned to spend time creating the ultimate package. Penske coilovers snub all four corners and stopping power comes from Baer using 14-inch rotors and six-piston calipers up front, 13-inch, four-piston versions in the rear. Gavin added a power brake booster from ABS Power Brakes, creating custom brackets to mount the components and installing the master cylinder on the driver-side inner fender panel.

Once all the new suspension and brake components were fitted and the dummy engine and trans mocked up, everything was removed and the chassis was powdercoated. Jeff at Precision Powder Coat in Melbourne, Florida, detailed every inch in semi-gloss black, then the team reassembled it adding the suspension, engine and transmission. When the body was finally dropped in place, only a few mods were required. The spare tire well was trimmed and now serves as a storage compartment. A few tweaks were needed under the hood, but overall, the marriage between body and frame went without a hitch.

Since wheels can make or break a design, the team chose Schott Mod 5s with spinners, 19x8 all around. The tires are from Toyo and they are Diamondback Redline versions, 225/40R19. Gavin observes, "They are about the largest tires that can be added to the rear without making major changes to the inner fenderwells." Even though all the wheels are the same size, StreetHeat narrowed the rearend slightly and used different offsets to make them look staggered. It's a subtle styling deception that adds just the right note of aggressiveness.

As you can guess, the original 283 V-8 is long gone. Powering the car is an LS3, using the Connect & Cruise package purchased through Murphy Cadillac in Melbourne. It was another smart choice since everything is engineered to work together. The crate included the high-revving, deep-breathing LS3 6.2L V-8, automatic transmission, transmission control module, ECU and the wiring harness. Detailing the engine began with a coat of single-stage urethane high-gloss metallic black. The stock LS3 intake was retained but new fuel rail covers and Billet Specialties modular valve covers with the Chevrolet script were installed to camouflage the coil packs. The car has a ceramic coated exhaust with a unique twist, since it exits through the car's original bumpers. The team was able to adjust elements within the chassis and the body along with the exhaust tips so that the 2 1/2-inch exhaust could connect with the smaller, modified bumper outlets. Clearly, the rumble was worth the hassle since the old C1 now growls like a new C6. Cal at Hartline Performance handled the final tune, ensuring that all 430 advertised horses (along with several extra) made it to 4L65E trans and 9-inch Strange Posi rear with 3.50 gears. The factory-appearing, automatic shift conversion kit is from Shiftworks, a necessary addition since the original car came with a manual transmission.

Everything on the body is original with the sole exception of cleaning up the front end by eliminating the license plate bracket. The car is factory black with a bright red interior and matching red trunk. The only change inside is the modern black-face Dakota Digital HDX instrument package that mimics the original but is a combination of analog and digital data. Roll up the side windows and the Vintage Air Gen IV A/C keeps the soft top car cool during warm Florida summers. Custom vents were added below the dash.

Matt says the upgrade went smoothly and the Roadster Shop staff was very helpful throughout the build. "We started around August 2018 and finished it up in time for Christmas." To put it mildly, Debbie was very happy with her Christmas gift. We're guessing that her husband probably didn't need to buy any other presents. Vette

Classic Car Studio’s latest project is shaping up to be a hell of a ride! » Read More
How Street Racing Broke Chris Holstrom Back in the Day » Read More
1957 Corvette Barn Find