How Street Racing Broke Chris Holstrom Back in the Day 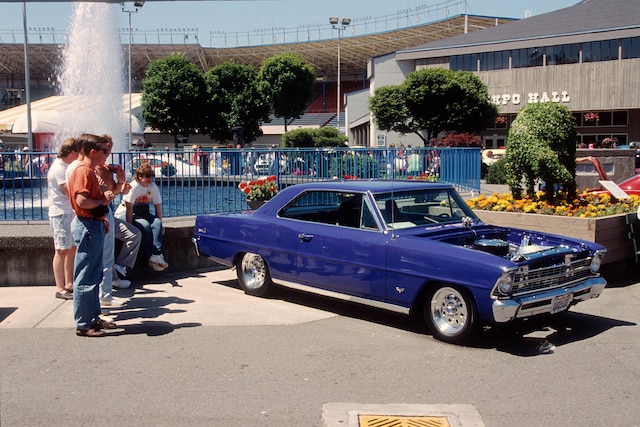 There are a few moments in life that move one along the path toward their destiny. One's destiny is simply that spot in life where all the experiences, professional training, and influences collide in a perfect, harmonious symphony. The '80's band Talking Heads sang the lyric, "Well how did I get here?" in the song Once in a Lifetime. Simply put, I want to share one of the many stories that helped some '80's kid, who grew up in the suburbs of Seattle, arrive at his destiny and dream job of building hot rods.

My earliest memories of working on cars began at the tender age of four. I spent more hours under my pedal car "fixing" it than driving it ... a sign of things to come, I suppose. My older brother was into Mustangs. Come to think of it, my whole family was. I was the youngest of six kids and from an early age I beat my drum to a different tune. It probably had something to do with GM's ad geniuses pounding the jingle, "Baseball, hot dogs, apple pie, and Chevrolet" into every American's head starting in 1974. As I grew, my passion grew and I became a full-fledged gearhead at a very young age.

This particular story takes place in the summer of 1991, one of the best summers of my life. I was a few years out of high school, dragging my way through junior college. I rented a little 30x30 shop. It was the equivalent to the coolest adolescent clubhouse ever. This was long before man caves became a thing. Late-night thrash sessions with engine parts and pizza boxes spread out everywhere was a common sight.

The car of my affection was a recently purchased '67 Nova hardtop my buddy raced during our high school days. It was blazing fast for its time, running deep into the 13s and spinning its tires past the 60-foot mark. I dug it out of his backyard and began refreshing every component of the car. A few buddies and I sanded down the faded black paint and sprayed the most incredible hue of bluish-purple enamel. It was 1991, after all, and wild colors were all the rage. As we moved to the mechanical side of the build I remember driving over to Super Shops right at closing and buying my first pair of Flowmaster open chamber mufflers. Of course, I had to install a Pete Jackson geardrive to annoy my neighbors.

As the build was wrapping up, an older friend, Mike Sader, offered to debut the car for me at the Street Machine Expo. This would be my first time in California and exposure to the unreal NorCal car scene. Pro Street fairground cruisers were all the rage, but, like glam rock, those days were coming to a close. Mike was instrumental in moving me down my career path that weekend. I knew no matter what, I wanted to build top-shelf street machines, always pushing myself to do better with each build. He backed up that selfless act by introducing me to a young, 40-something Gary Meadors at our local Goodguys event. Gary picked my car as his favorite of the show, and there I was, 21 years old and on top of the world. With the help of a few friends we turned out a reputable car in a matter of weeks.

As the days grew colder and autumn arrived, something new was on the horizon. I was invited to a local cruise-in and a handful of the nastiest sounding, clean-looking cars rolled into the parking lot. They were sporting full race gear with 'cages and trick stuff I had only seen on the track. As the aroma of racing fuel permeated the crisp night air, I had no clue my life was about to take another dramatic turn. This time it was not for the better.

Like a scene out of American Graffiti, we all caravanned down to our own version of Paradise Road and raced well into the morning hours. To say I was hooked would be an understatement. Every dollar I could get my hands on went into that car to make it go faster. I smashed the oil pan one night on the railroad tracks, throwing oil everywhere at 100+ mph. That poor Nova came home broke on a trailer almost every time I raced it. We were chased out by the cops one night just as I was warming up my tires. I saw his lights shining through a large cloud of tire smoke.

This life of street racing took its toll on me, my finances, and the car. That Nova eventually suffered the same fate as many cars of the time. The rear end was cut out to tub it and my life moved on without ever finishing it. A once pristine show car was now a carcass loaded onto a flatbed trailer off to a new home, never to be seen again. What were you doing the summer of 1991?

About the Author: Chris Holstrom is the owner of Chris Holstrom Concepts, a hot rod shop in Puyallup, Washington, that specializes in repairing and building high-quality muscle cars and hot rods.