1954 Corvette Restomod Too Nice to Drive 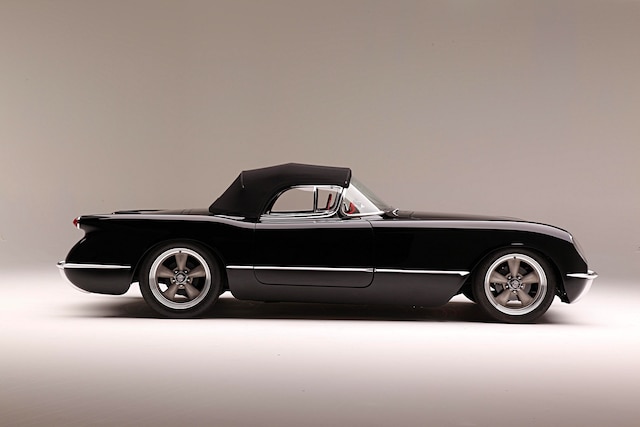 It should be pretty obvious that Corvettes were designed and built from day one to be driven. Their world-class handling combined with all-American muscle under the hood makes them nothing if not true drivers' cars. So what could possibly make a perfectly restored and modified 1954 Corvette undriveable? Well, apparently some people are just way too good at building cars and thus turn them into pieces of art that are simply too nice to drive.

When Ted Stevens first laid eyes on this gorgeous, black 1954 Corvette at a So-Cal Speed Shop open house a few years back, he recognized the quality straight away. Stevens didn't think twice before finding its owner to see if he could make a deal.

The owner and builder of the Corvette was Karpo Murkijanian. We caught up with him to hear his side of the story. As it turned out, the two realized they had met each other 15 years prior at a mutual friend's birthday party. But, that's not how their meeting at So-Cal Speed Shop started. As Murkijanian remembers it, Stevens and his son walked up and, without missing a beat, asked, "What's the number?" Murkijanian was more than a little confused. Stevens repeated, "What's the number?" Murkijanian finally realized he wanted to buy the car right then and there. He told Stevens a number, but said he'd need a day or two to think it over before hastily committing to sell his pride and joy. But, just 20 minutes later and after talking to a friend, Murkijanian decided to let it go. He found Stevens and sold it to him that night.

Why was this 1954 Corvette so good one man had to have it at any price yet its owner and builder would let it go even after putting in countless hours of work perfecting it? That is the question we're trying to answer.

Let's start with Murkijanian's process of building the car. For that, we have to go back 13 years when he first purchased the car. Actually, let's go back another year or two further to the point where Murkijanian decided to build a '54 Corvette in the first place. He was at a friend's birthday party when someone pulled up in a 1954 Corvette that was lowered and had some wheels on it. Funny story; this was the same birthday party we mentioned earlier where Murkijanian and Stevens first met. Anyways, the car looked pretty good and, at the time, '54s weren't all that desirable so Murkijanian decided a car like that would be next on his list.

When he finally got around to it, he spent six months looking for the right car to start with. What he found was a roller with no engine, no transmission, and none of the factory trim—a "basket case" according to Murkijanian. But as much of a basket case as it might have been, it had a straight body and was a good starting point for the build.

Before dropping in a powertrain or doing any suspension work, Murkijanian started by sending the Corvette off to a body shop in Downey, California, called Cardona's to have its owner, Dave Cardona, work his magic on the fiberglass. He began by skinning the whole body in fresh fiberglass, which then had to sit for nine months before making more tweaks, filling it, and then letting it sit for another nine months. The whole body and paint process was by far the most strenuous part of the build, according to Murkijanian. But eventually, the early C1 Corvette was ready for paint. He decided black was the color this car would wear, so Cardona sprayed the car in a single stage black urethane from Glasurit. "The paintjob is probably the nicest paintjob you'll ever see on a '54 Corvette," Murkijanian told us, "hands down—everybody says that."

A few other exterior modifications were made to the Corvette, but what was altered was done to perfection. Some changes that stand out include acrylic covers for the headlights along with 1953 Buick taillights. Murkijanian also spent an ungodly amount of time grinding the stock bumpers. Since 1953-'55 Corvette bumpers were basically slapped on as decoration, they didn't really fit all that great. Or, in Murkijanian's words, "The fit was terrible." Once he got them to line up just right, he had the bumpers and other trim sent over to Artistic Silver Plating in Signal Hill, California, to be re-chromed. The end result was undoubtedly better than stock.

With the help of friend and fabrication expert Derek Bower, the two reworked the factory soft top. They lowered the center bow then angled the rear bow forward to get rid of that "late 19th century carriage" look of the stock top. The side curtains were a rare find added by Stevens after his purchase of the car. They were in rough shape, needing lots of work to get them to their current state. The final exterior touch came in the form of 17-inch American Racing five-spoke wheels.

Underneath the Corvette, Murkijanian upgraded the ride and stance of the car significantly. Up front, he added a 1 1/4-inch antiroll bar and in the rear he swapped in a complete 9-inch axle assembly from a '70 Ford Torino. Murkijanian added a single link to the rearend and reverse eye rear springs with offset shackles to get the stance just right. With that Torino 9-inch came 3.00:1 rear gears and drum brakes. Up front, the Corvette got a full disc brake kit from Magnum Axle to help upgrade its braking ability by a few decades.

The Corvette's power came in the form of a 1968 small-block 327 Chevy that a friend of Murkijanian's had sitting at his shop. The block was worked over by C&J Engineering in Santa Fe Springs, California. The shop sent him back an assembled long-block complete with the infamous Duntov 30-30 cam. Murkijanian took the engine build from there, bolting on an N.O.S. 1965 Corvette intake manifold topped by an 1850 Holley carburetor. If you haven't picked up on it by now, Murkijanian was going for a mid-year Corvette vibe in the engine bay. He continued by adding a '67 Corvette air cleaner and mid-year valve covers. Then 2 1/2-inch ram's-horn manifolds were hung on the side of the small-block, sending exhaust gases out back through a 2 1/2-inch ceramic-coated system and a set of turbo mufflers.

Behind the 327, Murkijanian opted for a manually shifted transmission because his intentions were to drive and enjoy the Corvette. More specifically, the manual trans he bolted up was a four-speed Super T-10 operated by a Hurst shifter.

Surrounding the classic white-ball Hurst is a mostly stock interior just like Murkijanian wanted. Astute viewers will notice, though, that a design feature from those early Corvettes is missing: the speaker hump on the passenger side of the dash. He also fitted a radio delete plate and upgraded the stock dials with a set from Classic Instruments. The steering column is original, but the wheel was swapped out for a leather-wrapped 1957 model. Elegance Auto Interiors in Upland, California, took care of all the upholstery, covering the stock seats, door cards, and modified dash panel in red leather. Murkijanian then strung everything together with a completely new wiring harness from Rebel Wire.

After 10 long years of perfecting the 1954 Corvette, Murkijanian finally completed the car. Without even attempting to win anything, he took the C1 Corvette to the Grand National Roadster Show in Pomona, California, and placed first in his class, then at Goodguys Del Mar the car made the Top 10. Other than those few shows, Murkijanian really didn't drive the car all that much. "My intention was to build it and enjoy it but it came out too nice," he told us, going so far as to say he was, "paranoid about driving it." So it was no surprise then, that Stevens' offer at the So-Cal Speed Shop event only took Murkijanian a few minutes to decide on. He was ready to let the car move on, and he himself move on to cars he wasn't quite so intimidated to drive.

As for Stevens, we asked him what he enjoyed most about his ownership of the '54 Corvette over the past few years. His answer? "Looking at it. I really haven't driven it all that much." Before you jump out of your armchair to write us (or leave a comment on Facebook) telling us what a shame it is the car doesn't get driven often, just remember you are more than welcome to do whatever you would like with your own Corvette. We here at Vette are more than happy to see a work of art like Stevens' 1954 Corvette maintain its perfection for years to come. Vette