Made famous through posters and other marketing campaigns, this big-block ’69 is famous … once again 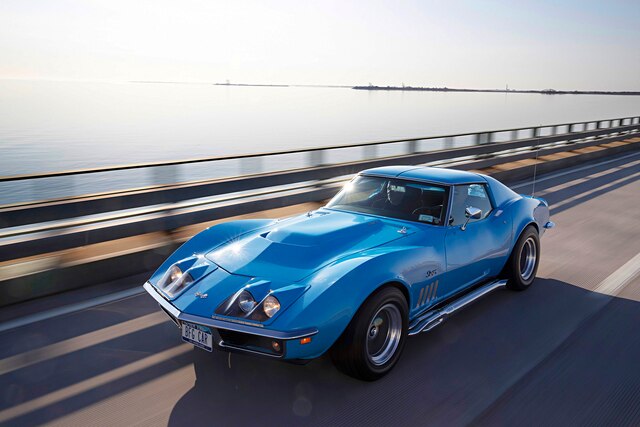 New Yorker doctor Frank Lastorino has been in love with cars in general, and Corvettes in particular, since early childhood. It’s therefore understandable that while growing up his bedroom walls were plastered with photos of fast and interesting cars, including a promotional poster created by BFGoodrich that depicted a wickedly cool big-block 1969 Corvette. As with all of the vehicles the tire maker used for its pervasive marketing and advertising campaign in the early 1990s, the Corvette was painted a unique shade of blue.

It was perhaps the color of the Corvette, more than anything else, that stuck in Lastorino’s mind in the ensuing years, and it was the memories of that poster on his bedroom wall, and all of the ads he saw in magazines, that motivated him to buy the car when it was offered for sale on an Internet auction site. “I always remembered the blue Corvette in the BFGoodrich ads,” he recalls, “because it was everywhere. Just about every car magazine from the early ’90s had a big ad featuring that beautiful Corvette. When it came up for sale I simply had to have it.”

After initially confirming its authenticity, Lastorino dug deeper to document as much of his Corvette’s history as he could. His research revealed that before the maker of BFGoodrich Radial T/As propelled the car to fame via its prolific advertising and marketing campaign, which lasted several years, beginning circa 1991, it led a very ordinary life. It was born with a 427/400 hydraulic lifter Tri-power engine, four-speed Muncie gearbox, 3.70:1 Posi rear, power steering and brakes, tinted glass and an AM/FM stereo. It left the St. Louis factory wearing Monaco Orange paint and a black vinyl interior. According to Lastorino’s research, a man named Frank Sebeste owned the car when the tire company initiated its ad campaign. The tire maker’s ad agency paid Mr. Sebeste a per diem fee to photograph it. The car was still orange at that point, and the agency wanted to have it painted blue. Somebody cracked out a calculator and realized that between the cost of painting it blue, paying the per diem fee and then painting it back to orange, they’d be better off simply buying the car from Mr. Sebeste, so that’s what they did.

After the repaint and modifications were completed the car was photographed for the ad campaign. Once the ads started appearing, the impressive looking Corvette went on a promotional tour that included stops at BFGoodrich tire dealers around the nation as well as major car shows, including Hot August Nights in Reno.

By the mid-1990s, thanks to pervasive advertising and marketing activities, the BFGoodrich Corvette was one of the most recognized cars in America. The company had distributed thousands of banners to retail tire locations around the country, printed hundreds of thousands of posters for the public and ran double-spread ads in scores of different magazines. After extracting every bit of value out of the car, BFGoodrich was ready to move on and the iconic blue Corvette went back to Chuck Lombardo’s shop in California with instructions to sell it.

Lombardo arranged the sale of the coupe to a local man named Gene Lu. Mr. Lu apparently didn’t care for the car’s unique color and eventually painted it Arena Red, a Porsche color. He used the car very little before putting it into long-term storage, where it remained until 2006. That year, he traded it to another California resident, his friend Randy Meadows, for a Chevelle convertible. Shortly thereafter, Mr. Meadows sold it to Dr. Lastorino, who shipped it across the country to his home in New York.

Lastorino was surprised that prior owner Lu had the car painted red given its famous history, and planned from the beginning to restore it back to its BFGoodrich ad campaign color. To accomplish that task he enlisted the able assistance of his cousin, doctor Phil Maglione. Like Lastorino, Maglione is a chiropractor by day but he’s car-obsessed and has been moonlighting as a hot rod builder and muscle car restorer for over 30 years. Operating under the business name Philymag Hot Rods, he stripped the Arena Red off, did all of the body prep and resprayed the car that oh-so-familiar hue of blue.

While the car was laid up for body and paint work, Lastorino, who also knows his way around cars, removed the engine. Old-school engine guru Dennis Quitoni, owner of Performance Services, in West Hempstead, New York, rebuilt the engine to L71 427/435 specs rather than the car’s original L68 427/400 specs. As such, it has the high-compression pistons and rectangular port, large valve cylinder heads that 435-horsepower engines came with. For enhanced driveability, Quitoni installed Comp Cams hydraulic roller lifters rather than solid lifters, as originally used in L71 engines. He also installed an MSD billet distributor to work with the MSD 6AL ignition box that Lastorino installed in the car. The end result is a perfectly streetable powerplant that produces more than 500 very reliable horsepower.

Lastorino reinstalled the freshly rebuilt engine and, together with cousin Phil, reassembled the rest of the newly painted car. The car’s original four-speed transmission was working perfectly so they left that alone. Similarly, the car’s original interior remained in excellent condition so they didn’t change anything there either. When they were finished, the car looked the same as it did in the early 1990s, complete with BFGoodrich blue paint, chrome side pipes, hood pins, Monza gas fill door, relocated 427 hood emblems, Torq-Thrust D wheels, and of course, the all-important Radial T/A tires.

Since getting his Corvette back into its BFGoodrich appearance, Lastorino has thoroughly enjoyed driving and showing it up and down the East Coast. “I really love the car!” he tells us. “And anyone who sees it who is old enough to remember the massive ad campaign it was a part of loves it, too. I’ve shown it as far away as Florida at the Orlando NCRS event, and with help from super-talented auto detailer Fred Montalto at Hi Tech Auto Care in Deer Park, New York, who has been in charge of detailing, paint touch-ups and prepping the car before each show, it has done extremely well.” Vette

Stock is cool, but for Efrain Diaz, the call of the track was much louder. His 1969 Camaro went from a rolling mess to a race-winning corner-carver!