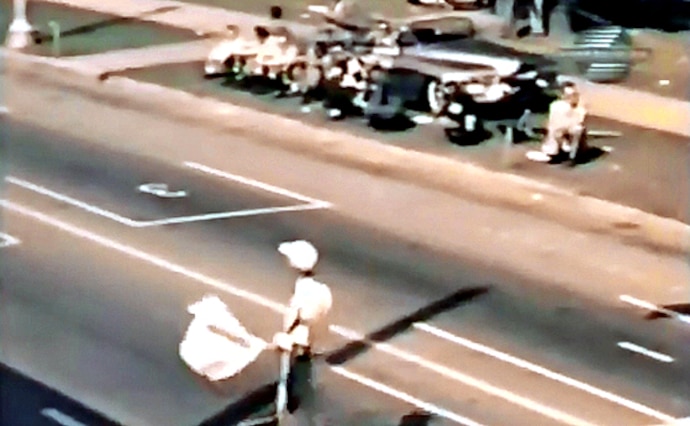 Harley Earl was one of America's great captains of industry. In the post-war years, many American GIs experienced European sports cars and brought them home. By 1948, sports car races were organized on the streets of Watkins Glen, New York. Earl's 1951 Le Sabre was a showpiece for GM's advanced technology and featured an all-aluminum supercharged engine that could run on gasoline or methanol; an automatic transaxle; a 12-volt electrical system and an aluminum, magnesium and fiberglass body that was styled like "The Future." Plus, it was a two-seater; kind of like a sports car.

Wanting to know more about the new sports car trend in America, in September 1951, Earl took his Le Sabre to Watkins Glen to attend the Watkins Glen Grand Prix. While the crowd loved the futuristic shape and features, the racers weren't impressed. Briggs Cunningham told Earl that he should build a sports car that could be raced. Regardless, it was providence that Earl and his Le Sabre were parked in front of the Schuyler County Court House on Franklin Street, Route 14, in downtown Watkins Glen, because in all likelihood, that's when the seed germinated in Earl's mind for an American sports car.

The rest was history. First, Earl and his team developed a prototype two-seater based on a shortened 1951 Series 62 Cadillac. Then, with help from designer Bob McLean and others a concept based on the Jaguar XK-120 was developed. The design was wide, low and sleek. Management loved it and approved the construction of the 1953 Motorama car. As details came together, the word Corvette was chosen for its military naval meaning: a small, lightweight, maneuverable war ship.

Earl's first design for the Corvette badge featured a round bezel with "Chevrolet" lettering at the top, "Corvette" script at the bottom and a set of crossed flags, a checkered flag on the right and an American flag on the left. GM's legal department pointed out that the U.S. code concerning the proper care and use of the American flag said, "The flag should never be used for advertising purposes in any manner whatsoever." Today, no one abides by that rule and it is never enforced. Earl's fallback position was to use a fleur-de-lis. This symbol is typically associated with the French, but one source says that it is a Greek symbol of virility, which would fit for the Corvette. The Corvette crossed flags badge was on the first Corvette and has adorned every Corvette since. Let's walk through the Corvette crossed flags hall of fame.

C3 Corvettes had two distinctive crossed flag designs and five variations. The 1968-'72 nose badge and the 1968-'73 gas cap badge used the same design found on the 1967 Corvettes. Corvette nose badges in 1973 and 1974 used the same crossed flags but centered in a round ring with a stylized red burst with an outer ring that read "Chevrolet Motor Division Corvette." For 1975 and 1976, the same design was used but "Corvette" was added under the crossed flags and the outer ring lettering was removed. The 1977-'79 nose badge was restyled with flattened out flags and were then used on the 1979 gas cap door and the 1982 horn button. To celebrate the Corvette's 25th anniversary, the 1978 badge featured the crossed flags from the 1977 badge in a stylized circle with "25" over the crossed flags and "Corvette 1953 Anniversary 1978" lettering in the circle's outer ring. All 1978 Corvettes used this emblem.

The second distinctive design was used on the 1980-'82 Corvettes, but with two different versions. The flags were straight across with a steep chevron in the middle. The nose and horn button emblem was slightly angled up and the gas cap version was straight across. Lastly, the 1982 Collector Edition badge was a slightly modified version of the 1977-'79 badge with block lettering "Corvette Collector Edition" inside the outer the ring.

C4 Corvettes used one basic design with two minor variations. The crossed flags were without the flag pole and in front of a chrome ring. From 1984-'90 the bowtie was yellow on a red field and from 1991-'96 the bowtie was red on a black field. The 1984-'96 nose badge was slightly angled and the gas cap door badge was straight across. The 40th Anniversary Package badge was the same as the gas cap badge, but with the number "4" to the left of the round ring, to form the number "40." Lastly, the 1996 Collector Edition had a fender badge the same as the gas cap badge, but instead of the bowtie it read "Collector Edition."

The C5 1997-'04 cross flags were the same with two variations. The flags were spread apart like open wings with an oval behind them. The 2003 50th Anniversary Edition used the cross flags with "5" in front of the left checkered flag and an oval behind the flags to form "50." The 2004 Commemorative Edition was a salute to the success of the C5-R racing Corvettes at Le Mans. In the space above the flags and inside the oval it says, "Commemorative 24:00 Heures du Mans 2 GTS Wins."

The C6 design has the spread wings similar to the C5 design but without the flagpoles and rounded edges. The spread wings of the C7 crossed flags are swept back with sharp corners. Lastly, the C8 crossed flags design is similar to the C7, looking like a delta wing stealth military jet. Corvette cross flag designs have come a long way from Harley Earl's American flag and checkered flag emblem announcing America's sports car. I think many of us would still like to see Old Glory on that badge. Vette