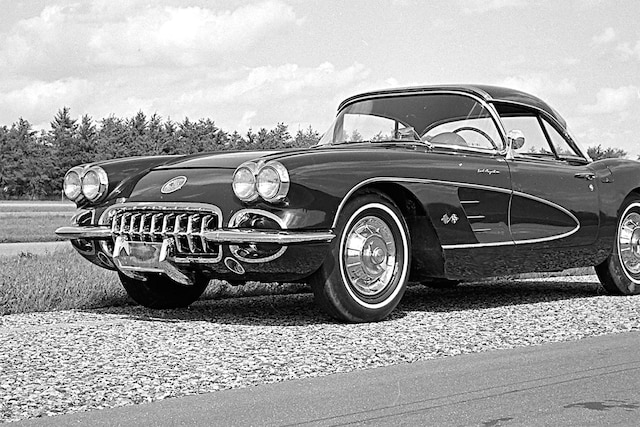 Years before a certain movie franchise co-opted the phrase, that’s how Motor Trend contributor Joe H. Wherry described the 1958 Corvette in a December 1957 “First Feel Behind the Wheel” driving impression.

The 1958 model is best known, for better or worse, for its exterior redesign. GM as a whole was going through a “more is better” phase with styling elements, and the Corvette didn’t escape the trend. The car was a few inches longer and wider, but the most obvious changes were the add-ons: quad headlamps, larger front bumpers with ornamental ducts behind them, a restyled grille, chrome trim on the fender tops and faux louvers on the hood. The side coves now had their own simulated air ducts and chrome trim, and there was more chrome in back in the form of two trim strips running the length of the decklid.

Reactions to the new exterior were mixed, to say the least. But the car received nearly unanimous praise for its interior redo, which grouped all the essential gauges right in front of the driver. Mechanically, the 1958 model was little changed from the previous year, with just the addition of a few horsepower to the standard carbureted 283 and top-line fuel-injected version.

(The horsepower Wherry quotes would indicate he drove a Corvette with the standard single-four-barrel V-8, though the underhood photo in his article shows a fuel-injected engine. Our guess is the engine shot came from a different car.)

It seems Wherry’s time behind the wheel was brief, as he was limited to evaluating the Corvette at the GM Proving Grounds. But it was enough to come away with some very positive impressions of the new car. The Corvette’s four-speed was “smooth as silk” and its shifter “exceptionally handy.” The bucket seats were “as comfortable as you could wish for.” Dual reflectors inside each door were “perhaps one of the most intelligent standard items of new vintage.” The Corvette’s handling, “like all recent Corvettes,” was “without fault.”

Even the car’s styling, he felt, was “kept in line with the dreams of enthusiasts.” As long as those enthusiasts dream of lots of sparkly chrome. Vette

1958 C1 Corvette with More than a Few Surprises

Heartland Customs built this 1958 C1 Corvette looks mostly stock but there is much more underneath than meets the eye.

1958 Corvette passes from owner to owner but keeps ending up in a shed, until now.

Jerry Lyndon’s 1958 Chevrolet Corvette is the accumulation of over 50 years of obsession with Corvettes. This home build is all C1 Corvette on the outside but underneath is hiding the entire drivetrain of a C5 Corvette.

It‘s entirely possible to recreate a 1958 Corvette using an aftermarket body and rolling chassis, instead GTS Customs started with a genuine 1958 Chevrolet Corvette.

This 1957 Chevy Corvette not only looks great under the lights, it shakes the local streets and then it runs blistering quarter-mile times at countless racetracks across the country.

Restomod 1958 Corvette owned by Jim and Mary Ann Stewart gets down with a unique style and Chevrolet Performance Crate V-8.

This old-time 1958 Chevrolet Corvette packs some amazing power and handling. Don't miss out on its sleek style.

Aussie John Ward of Fuel Bespoke Design took a 1958 Corvette in a sorry state and turned it into a flawless, right-hand-drive restomod.