Rising to street/strip supremacy with a dose of twin twistys 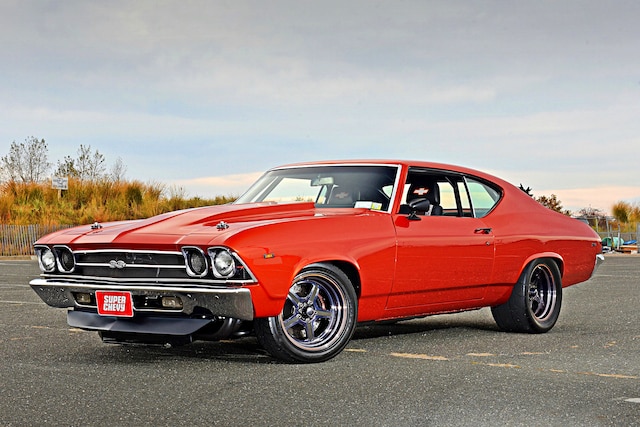 Growing up, Mike Stallone of Northport, New York, was never happy with the status quo when it came to his motorized toys. Anything Mike had, he had to make it better; and well, that meant faster in his book ... much faster. Whether it was a mini-bike, boat, or car, the kid just had a need for speed. He was more than happy to do all the modifications by himself, with his own two hands.

Mike started working on cars as a wee-little one. You see, his dad was a mechanic and it was just natural for the youngster to be glued to his dad’s hip wrenching alongside him in the garage on some type of powered-up project. By the time he was 16, Mike got his first taste of muscle car ownership, scoring a small-block ’66 Chevelle that needed just a little TLC, and a new engine to go along with it.

Young Mike went ahead and pulled the spent powerplant from the midsize Chevy. He then built a stout 350 small-block for it, tossing the automatic in the process for a nice four-speed package. Once completed, that potent Bowtie-branded ride would last him for only a short time, as Mike was always looking to upgrade to something faster.

A succession of big-power Chevelles and Camaros would follow that ’66. Twelve years ago he got the itch to build himself a supercar of sorts, one that would not only be as fast as sin but one that would be comfortable to drive and handle like it was on rails.
Power Surge
Mike found himself a great starting point for his new project, a car that would morph slowly over the next dozen years. The 1969 Chevelle started out with a 396/350hp engine built with a 12-bolt out back and stuffed with 4.11 gears. After a cam change and a swap to a T-56 six-speed Viper transmission, the car received a four-wheel disc setup and was lowered for a proper stance. Most guys would be happy with that hot rod recipe, but not Mike. That combination was quickly changed up, as a 582ci powerplant was soon built for the car. With the added weight up front, the car lost some of its nimbleness on the road, which didn’t sit well with its owner. Nonetheless, Mike forged on, adding creature comforts like a leather interior, power windows and locks, and Alpine head unit. But Mike soon realized that even after all these modifications, he needed to go back once again to the engine. He wanted more power, but without adding anymore weight. He had a plan.

Mike went out and bought an all-aluminum Dart 565ci block to start his new build. The lightweight block’s cylinders were then stuffed with Diamond coated pistons (10.5:1-compression) and topped with aluminum 355cc Dart heads with Manley titanium intake valves and Inconel exhausts. Hogan’s made Mike a custom Ram Jet-styled sheetmetal intake. An Accufab throttle body, along with a 16-injector setup gets the fuel to the spark, which is supplied by an MSD ignition crank trigger distributor. Engine management is handled by a BigStuff3 system.

A Concept One serpentine setup handles the accessory drive duties with style, and this Chevelle boasts a billet power steering pump and a Vintage Air system to keep things cool. Mike also installed a GM flex fuel sensor, but mainly runs the car on E85; something he’s been using for the last five years. Chris from CK Performance in Holbrook, New York, built Mike a 4L80E lockup trans to back this BBC, and Joe at ProTorque supplied a turbo lockup converter to handle all the power. This ride stays cool by using a custom Ron Davis radiator pushed by a pair of 16-inch SPAL fans.

To hold the nearly 1,800 horsepower, a custom carbon-fiber driveshaft was crafted for the Chevelle. The power is sent out to a Moser chrome-moly M9 rear with an aluminum bolt-through center. Wilwood six-piston brakes, 13-inch front and 12.5-inch rear, handle the stopping duties. Suspension upgrades are made up of Detroit Speed components along with double-adjustable coilovers at the corners.

The wheels are Billet Specialties Street Lites: 17x9 up front and 17x11 out back. Vinny at Action Powder Coating added a black translucent finish to the rims and polished the wheels out, along with many other parts for the build. The marker lights and door handles also received the interesting black finish. The 2001 Prowler Orange (with added copper pearl) paint was handled by Rob Muscedere at Auto X in Northport, New York. Mike added carbon-fiber inserts to the wheels with an added pinstripe … pretty creative!

The interior has a custom 10-point chrome-moly rollcage and antiroll bar built by the Montana brothers at Pro Chassis and Design in Port Jefferson, New York. The seats are Cobra pieces, done-up in leather. A carbon-fiber dash adds a touch of modern to this late-’60’s muscle model. He added Bluetooth so he could run his modern gadgets, and even installed a reverse camera for an added touch of safety. A trailer hitch was added for a possible trip to Hot Rod’s Drag Week, which will double as a parachute holder when not on the road.

When it came to hopping up the engine, well, that’s an interesting story. “I used Ed Woolsey at FFE Racing to rear-wheel dyno my car when it was naturally aspirated. I walked around his shop and learned he did nothing but imports. Their fabricating skills and TIG welding were beautiful so I asked him if they would be interested in doing an American car.” Well, of course, the answer was yes.

With that, FFE took on Mike’s ride, installing two 76/75 Precision turbos complete with billet wheels and ceramic ball bearings. The crew at FFE fabricated everything from the headers to the intercooler. The final tuning was done by John Balinsky at OAB in Hammonton, New Jersey. The finished product was nothing less than stellar. Mike loves how the turbos spooled up quick and made the power curve more to his liking.

Power Up
Mike couldn’t be happier with how his ’69 Chevelle has turned out. And like a proud father, he says the best part of creating this radical ride was having his kids there with him helping out. Michael, Gianna, and Nicholas all had a hand in putting this top-notch Chevelle together. And when it was all said and done, not only is this Chevelle a dream ride in street form, on the track it’s done a best quarter-mile of 8.30 at 179 mph. Damn impressive to say the least.

A big shout-out goes to Glenn Hunter of Hunter’s Garage in Northport, New York, for his work with the Chevelle’s tuning and for his overall help with this build. This Chevelle has gone through a true progression of power, from its roots as a stock muscle ride to its current status as a mega-equipped street burner and track master, and Mike just couldn’t be happier.

Lost for 47 Years, 1969 Chevrolet Yenko Chevelle Comes Out of Hiding & Is Headed for Restoration

After selling his 1972 pro-touring Chevelle Jeffrey felt the regret so he enlisted the help of Classic Car Studios to get him back into a badass, blown, 1969 ProCharged A-body!

Original visions are often replaced by revisions, so after Gary got his 1969 Chevrolet Malibu home and torn apart, his plans for what he wanted to do with the car changed.

No lie, the backstory is this Daytona Yellow 1969 SS396 Chevelle was advertised as a low-mileage, numbers-matching, real deal SS396 with a Turbo 400 and bench seat.

This 1969 Pro Touring Chevelle features a 740hp Mast Motorsports LSX 454 and an army battle green vinyl wrap to give it a totally sinister attitude.

This rare 1969 Chevelle is a survivor from the 1970s, back when blown muscle cars like this were referred to as Street Freaks.

Al cooked up one beautiful 1969 Chevrolet Chevelle that draws quite a crowd at every show he brings it to.

It doesn’t get much better than a 540-cubic-inch big-block to power a killer-looking 1969 Chevrolet Chevelle.