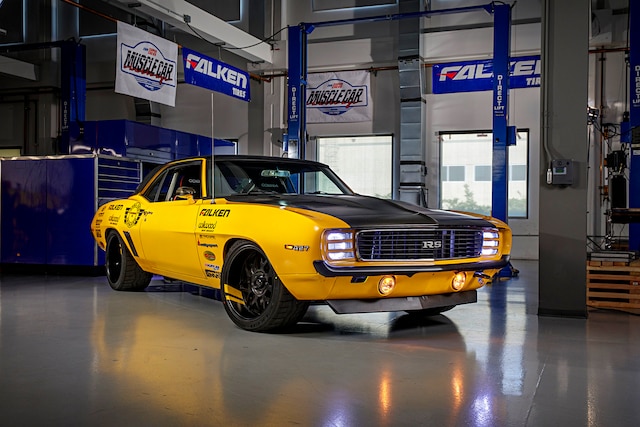 Once every year Super Chevy hosts a put-up-or-shut-up style suspension challenge and invites suspension manufacturers to show the world what they’ve got. It’s an all-inclusive shootout that tests suspensions of all styles, cost tiers, and ideologies and puts them to work in the road course, slalom and 100-yard dash. Last years’event, the 2018 Super Chevy Muscle Car Challenge presented by Falken Tires, took place in Sunny Fontana CA and had great turnout of awesome manufacturers ready to go to toe-to-to, tire-to pavement, and pedal-to-metal to prove they are just as hardcore as their customers.

Efrain Diaz is no stranger in Pro Touring circles. He’s been racing for some time and is a fierce competitor in local autocrosses, SCCA events, and Optima Ultimate Street Car Challenge events, where he just took home a win in the GTV class at the Invitational event in Las Vegas.

“I’ve always had a knack for building things, said Diaz. “I was the kid who took stuff apart just to see how it worked. I cut my teeth learning how to drive on go-kart track, and I was a mechanic in the army.” His knack for mechanical wizardry is evident in the fit, finish, and performance of his Total Cost Involved (TCI) backed entry, which was blisteringly fast.

Diaz bought the Camaro at the Pomona Swap Meet 16 years ago and he described the condition laughingly as “a big, old, rolling turd.” The car was an original RS car but its condition was extremely rough.

While his original plan was to restore it, plans did what plans often do and took a 180-degree turn. Actually, according to Diaz, the whole change between restoration and complete Pro Touring machine build can be solely blamed on racer, Mary Pozzi.

“I went to a Goodguys event in Costa Mesa and saw Mary running her Camaro there and thought this could be a more fun path than restoring the car and having it sit in the garage and do nothing,” said Diaz. “I wanted to find a way to make it perform.”

That road to performance wasn’t clearly defined and Diaz tried many iterations of parts and suspension systems in route to the car’s current setup.

“I did a lot of intermediate stuff trying to make the car drive better,” said Diaz” “Then I got bit pretty hard when I went to the Run to the Coast event where I saw some guys with high horsepower cars doing some really amazing things with classics.”

Basic upgrade parts evolved into more adjustable components and eventually the stock subframe was yanked in favor of a stiffer, fabricated piece. A modified LS7 engine, refreshed by EVOD garage, became part of the mix, as well as Tremec Magnum transmission, Currie full-floater rear end with Strange center section, Wilwood brakes, and other high-strung hardware. Eventually, Diaz decided to take the car on step further, removing the Frankenstein mix of suspension components accrued during years of driving and racing and turning to TCI for a unifying package.

Under the car’s four corners is now a quartet of Total Cost Involved (TCI) components consisting of their Pro Touring IFS in the front and Torque Arm rear suspension. “The front is roughly 10 years in the making,” said Jason Wilcox of TCI.  “It uses our custom spindle which is a really neat setup where the four bolt holes are asymmetrical and you can set caster in your garage by setting an angle finder on the steering arm.”

The design of the front suspension was highly developed and tested before landing at this iteration. “King pin inclination, camber gain, it’s all custom and it works really well,” adds Wilcox. “It’s about 120 pounds lighter than a factory crossmember.”

In the rear, the Camaro was treated to a modern, TCI torque arm suspension design. “It starts with what we call a telescoping slider which allows the suspension to not only articulate up-and-down and side-to-side, but keep it from binding while it does so,” said Wilcox. “From there it is connected to the rear housing with some adjustable pinion bars, a Panhard bar so you can adjust roll stiffness, and two lower link bars that use about the same mount point as the leaf springs.

Torque arm suspensions have been around since the late ‘90s, having been used in fourth-gen Camaros and Firebirds, however, the technology has been perfected and adapted to muscle car applications. “What the torque arm can do between anti-squat and how it plants the tire mid-corner is amazing,” said Wilcox. “It can deliver so much grip you can actually power on mid-corner. Mediocre drivers look good and good drivers look that much better!

Judging by Diaz’s performance at the event, we would have to say he falls squarely in the latter category.

Used in BFG posters and other marketing content, this 1969 Corvette is as famous as Corvettes come.