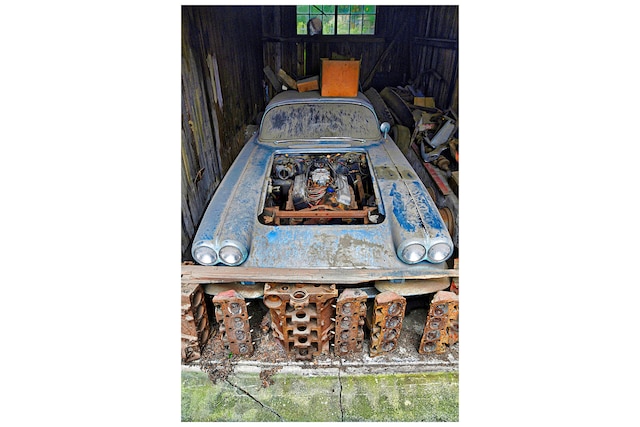 In the spring of 1967, Tom Lichty dug down deep into his shallow pockets and bought the car of his motor driven dreams. At the time he was a 17-year-old high school senior in Paradise, Pennsylvania, working part-time at Shirk Chevrolet right there in town. He was a young man ready to make his way in life; and to get wherever he was going, all he needed was a cool ride to call his own.

Young Tom was a motorhead through and through, and by working at Shirk he became exposed “up close and personal” to the many products the Bowtie brand had to offer. Right away, the Corvette model just grabbed his attention, and soon became “the car” he would seek out as his first main squeeze. And who can blame him? Not us!

So Tom started looking for a deal on a good used Corvette. One he could afford on his tight budget, and one he could definitely customize to make it his very own. He spotted an interesting ride in the local want ads and decided to clear the needed time to check it out. It was in nearby Mt. Joy, and the one-owner Corvette was sitting on a used car lot. So he grabbed his parent’s car and made his way over in a hurry to inspect it in person.

The car in question was a base model 1959, built with a 283/240hp powerplant, with a single four-barrel up top. It was a stunning but well-used car to say the least, dressed in quadruple black and looking pretty much the way she left the showroom; minus some of the typical wear and tear that eight years on the road would bring. Tom was just smitten from the moment he saw her, and knew he had to have her to call his own. So he made an offer on the car, which was accepted. With a handshake, Tom quickly became a new Corvette owner.

It wasn’t long before motorhead Tom needed to make some adjustments to the car. By now he was an official high school graduate, and was working full-time at Shirk, living the “nine to five” lifestyle. He had a steady flow of cash to make purchases, and even better, he had the employee discount in hand. That meant he received a nice price on anything that Shirk could get for him. The options seemed endless for Tom, but he had an idea of what he wanted to do.

The first thing Tom needed to change was the transmission, as the stock three-speed just wasn’t cutting it for him. Luckily, he had a car crazy cousin who quickly sourced a BorgWarner T-10 to replace the OEM trans behind the small-block. After running the four-speed shifted car around town, Tom decided he needed more power as well. So he did what any Chevrolet employee would do; he hit up the Shirk Parts Department for some go-fast goodies.

He started with a stout 327/375hp block with matching heads and added an aluminum intake and a Holley three-barrel carb up top. It was 1969, and the Z/28 was a hot ride, so Tom turned to the Trans Am bred racer to get his next item: a Z/28 Stage 2 cam. A set of headers were added next, along with a magneto for spark. When it was finished the reengineered engine turned out to be more powerful than Tom ever expected. The car was a beast out on the road, and gave Tom as much as he could handle. Next there were changes made to the visual aspects of the ’59. To add an even more aggressive look, Tom unbolted the front end, lifted it, and stuffed-in pieces cut from a 4-inch I-beam in to raise the nose. Out back, he reversed the shackles and lifted the back end as well to even out the stance. When it was all said and done, this car was jacked up, powered-up and ready to dominate the streets.

Now he needed a little eye candy for his Corvette. The all-black motif was getting old with him so he brought the car into the garage, dismantled her and prepped her for a paintjob. At that point he decided to make a few body changes along the way. He scrapped the rear bumper for a more sedate ’57 issue and filled up the extra holes out back. He removed the chrome fins from the coves and filled in the mounting holes. The big, round Corvette emblems and front grille were removed because Tom just never liked them. Up top, he added a cool 427-styled hoodscoop for a more menacing look. He then cleaned up the body and sprayed the skin in ’67 Cadillac Cobalt Firemist, a color that Tom saw on a Caddy and thought would be killer for his own ride. He was right. After a few touch-ups to the interior and a cool tach mounted up front, the Corvette was ready to hit the streets again.

Tom remembers getting into some trouble with the car, but nothing that a few stiff warnings didn’t get him out of. He used it for a while as a daily driver, but he always seemed to be tweaking it one way or another, so the Corvette spent plenty of time in the garage. He was smart to have a series of “beater” rides, and took the car off the streets when bad weather hit.

A few years later he got a call from his buddy. He was moving to Idaho of all places and wanted to know if Tom wanted a change of scenery. Tom thought it would be a cool adventure so he parked the Corvette on his parent’s farm, loaded up the van he was driving, and drove 2,500 miles to relocate in the Gem State.

A year later, Tom had to come back to Pennsylvania for a family function. While he was in town he had an accident with the van, disabling the old ride. Without a ride back, Tom turned to the only other means of transportation he had: the Corvette. Figuring he didn’t want to stop every 50 miles at a gas station, he took it into the garage and spent the next few days making it more usable on the highway. He made it back to Idaho, though the mountain elevation changes and altitude caused some challenges with ’59. While he was home, Tom had met a girl. She helped him decide that maybe Pennsylvania wasn’t so bad after all, so he made plans to return to Paradise to see what would come of their meeting. Only one problem here; how to stuff all his belongings he had stashed in Idaho into the Corvette for one trip back east? So he did what he had to, and installed a homemade trailer hitch on the Corvette, attached and loaded a U-Haul, and headed back to Pennsylvania.

Once home, Tom settled in to a new job, got married and put the Corvette away for safekeeping. It would then sit for the better part of 30 years, until a young man with a similar motorhead upbringing and life story came calling about the Corvette. Enter Michael Fairservice. Young hot rodder Mike met Tom through his good friend Nick Canzoneri. His buddy had a picture of Tom’s ride, with a pair of race slicks leaning up against it. From that snapshot, Mike knew he had to see it in person. “One day I happened to be very close to his (Tom’s) area so I asked if I could come see it,” states Mike. “I drove like hell to get there … it was a treat to even just see a car like that.”

They talked for a bit and Tom mentioned that he might be ready to part with it. Mike was definitely interested in the Corvette, and stopped by regularly to visit Tom and his car. “He probably got tired of me bugging him,” says Mike. Tom told the young hot rodder that if he ever sells the car, it would go to him. There were plenty of guys that wanted the car, but Tom saw a lot of himself in young Mike. Plus the fact that the youngster lived a good distance away, and that would assure Tom that he wouldn’t see it driving around his area on a daily basis.

So after more visits, Tom finally gave Mike the news he wanted to hear; “I’m ready to sell,” he told him. Tom says it went to the right guy. “I saw how excited Mike got when he saw the car. He was as excited about the car as I was when I first bought it.” And to Mike, hearing the stories that Tom has about the car and hearing them firsthand, from the owner, made it that much better.

Today, Mike has taken the car back to Tobyhanna, Pennsylvania, and has started the process of cleaning it up and making it street worthy again. As far as the changes Tom made, for now he’s going to keep it the way he found it; from the shaved emblems and grille, to the cracked big-block scoop on top. But, of course, there’s always room for improvements down the road. And that’s just the way of a true hot rodder. This Corvette has now come full circle; passed from one Corvette enthusiast to another, to enjoy for years to come. And one day I’m sure Mike will get that knock on the door from an excited young car aficionado, just itching to make this sweet ’59 his own. Vette

Replacing the fiberglass nose of an early Corvette seems like a daunting task, but we show you how easy it can be.

She wanted a 1959 Chevy Corvette she could drive and enjoy. After a two-year search, followed by a four-year build that’s exactly what she got.

Straight Line Spotlight is a monthly column that focuses on the sportsman and stars of drag racing at every level of competition.

» Read More
Replacing the Front End on a 1959 Corvette

A new front end on this 1959 Corvette is installed. Check out this tricky fiberglass install on a vintage Corvette.

Custom and Corvette often mix like oil and water, but this bad-to-the-bone 1959 Vette melds the two concepts together like peanut butter and jelly.