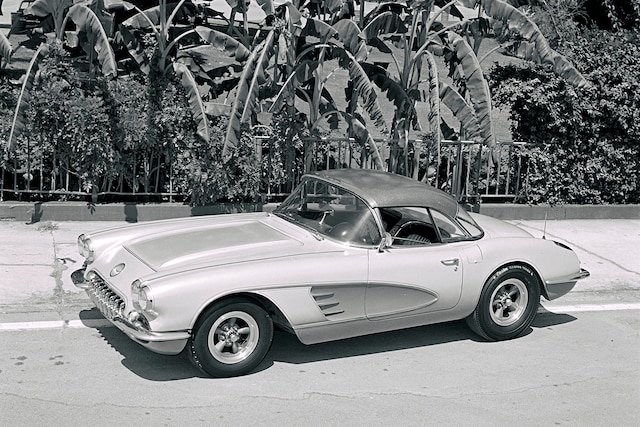 “Well, not quite for pennies,” Eric Rickman admitted, “but for $50 you can get all the ingredients to produce your own fabulous pearl paint job.”

With that, Rickman, longtime Petersen Publishing photographer and a Corvette owner himself, began a story in the Nov. 1967 issue of Hot Rod magazine about how painter Joe Andersen was offering a kit “that will make you the envy of every hot rodder in town,” Rickman promised. “Now, at last, if you know anything about spray painting, or have a paint shop anywhere near you, you too can have one of those long-dreamed-of paint jobs with the added attraction of very little upkeep.”

The kit included “base paint, pearl highlight, thinner, stirrers, tack rag, and strainers, plus wax,” Rickman said. Andersen also put in “very complete and detailed instructions to enable even the beginner to do a good job in his first attempt.” (You’ll note that missing from the kit is any form of protection for the painter. No gloves, suit, respirator, not even a paper mask. Then again, everyone smoked in those days, too.)

To illustrate the kit’s application, Rickman followed the refinishing of a 1959 Vette—or, at least, some of the major steps. Pictures we found in the Petersen Photo Archive that didn’t make it into print show the car prior to the how-to steps that were in the magazine. The Vette looked like a project that someone started but didn’t complete. Bumpers and emblems had been removed, some sanding had been done, and what Rickman called “good old 3M green putty” had been used to fill seams in the body.

“The more work you are willing to do in preparation, the better the job is going to look,” he advised, recommending the removal of trim, filling of dents and scratches and sanding the body. Then wash the car thoroughly and mask off areas not to be painted. “Difficult trim needn’t be removed,” he noted in a photo caption showing Andersen masking around the chrome pieces on the Vette’s front end. “Here, narrow tape is used to follow contour closely.”

Then “blow out all areas with compressed air. Be sure to blow along under the edges of the chrome trim, as water tends to remain underneath and then be blown out when you take a pass with the paint gun, making a big mess.”

To prime or not to prime? “Joe says one of the attractions of his kit is that priming isn’t necessary if there hasn’t been extensive bodywork done,” Rickman said. “In many cases, primer doesn’t stick to the old paint as well as the pearl paint itself.” This car, though, was completely primed, “to cover mottled effect due to sanding through several previous paint jobs.”

The enamel paint in Andersen’s kit “can be applied in any kind of weather with little trouble,” Rickman wrote. “In hot weather the paint is applied faster and wetter; when it’s cold, the paint goes on slower with longer periods between coats.”

Andersen recommended shooting the “doorjambs, under the hood, around the deck lid, and the inner edges of the trunk compartment” first, before moving on to the rest of the body. The basecoat, Rickman said, “dries very rapidly. By the time you wash out the gun and reload with the pearl highlighting, you’re all ready to start spraying again. After highlighting, wash the gun and reload with clear pearl and keep going. Allow at least 24 hours for drying in normal weather, longer if cold or damp. If you want to apply a contrasting pearl fade color around the edges, or on inset panels, now is the time to do it.”

It’s too bad Rickman didn’t shoot any color photos of the car. As he describes it—“tangerine pearl body, with panels and hood faded in with apricot pearl, and an apricot metalflake top”—it must have been quite the looker.

“Unmask the car after the paint is dry and be dazzled,” he wrote. “Put the chrome trim back on and touch up any spots that need it, and you’re ready to go out and wow the town.” After about a week “you can rub it out with rubbing compound, apply a coat of wax, and it will really knock ’em dead.” Just be ready for some upkeep. “Once the enamel’s hard surface coat is rubbed off, you will have to keep it waxed to protect the paint.”

Or, “if you’re lazy, like me, don’t touch it; just keep the car washed and the paint will last for a couple of years. When it does finally get a little mungy, get busy with rubbing compound, and voila! A new paint job underneath.” Vette

Replacing the fiberglass nose of an early Corvette seems like a daunting task, but we show you how easy it can be.

She wanted a 1959 Chevy Corvette she could drive and enjoy. After a two-year search, followed by a four-year build that’s exactly what she got.

Straight Line Spotlight is a monthly column that focuses on the sportsman and stars of drag racing at every level of competition.

» Read More
Replacing the Front End on a 1959 Corvette

A new front end on this 1959 Corvette is installed. Check out this tricky fiberglass install on a vintage Corvette.

Custom and Corvette often mix like oil and water, but this bad-to-the-bone 1959 Vette melds the two concepts together like peanut butter and jelly.