Corvettes Are Golden at Barrett-Jackson Scottsdale 2019

Corvettes are golden at Barrett-Jackson Scottsdale 2019 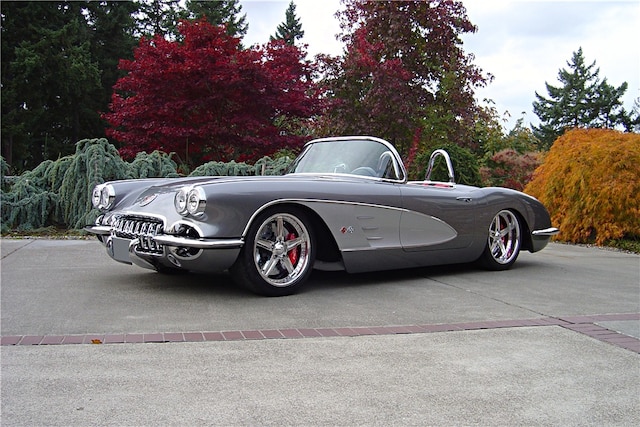 Regardless of the auction, you can rest assured that Corvettes will always be crowd favorites. Traditionally, Corvettes have a noticeable presence at any auction and regardless of what the keynote car or cars are, Corvettes get everyone’s attention. In trying to get a feel for the Corvette “price climate” I watched closely at what went on at the most recent Barrett-Jackson Scottsdale auction.

There were 160 Corvettes that crossed the block and they all sold. In the mix was Jeff Gordon’s black-on-black 2016 C7.R (747 miles on the odometer), which brought in a whopping $600,000 for Jeff Gordon Children’s Foundation. (The entire gavel price went toward the charity.)

One of my favorites belonged to longtime friend Art Morrison, who knows a thing or two about making any car handle, especially restomod Corvettes. His 1960 C1 (Lot #1330) crossed the block garnering an impressive $187,000. (It turns out there were approximately 11 Corvettes and all told 35 Morrison chassis equipped cars that drove over the auction block.) Project 3G, as he calls the C1, was to build a Corvette capable of producing 1 g on the skidpad, 1 g of acceleration and 1 g of braking … and it accomplished this goal. Not bad for what appears to be an old-timey C1 Corvette. Art and his son Craig have methodically crafted a C1 chassis for restomod fans to turn their lumbering C1 into an all-out handling sports car. The chassis is based on C5 IFS geometry while the rearend is Morrison’s triangulated four-bar setup.

There were many other Corvettes that crossed the block, with restomods bringing in high dollars, such as another 1960 C1 Corvette (Lot #1440), again Morrison-chassis equipped, that tipped the dollar scale at $330,000. An immaculate red 1963 C2 split-window (Lot #1333), again riding on a Morrison chassis, brought in a whopping $385,000.

There were plenty of stock and restomod Corvettes that crossed and sold while on the auction block, proving once again they’re always desirable. We have seen Corvette prices ebb and flow but right now we are in the “golden era” for restomods as they’re constantly bringing top dollar. Of course, the iconic years, models and properly optioned Corvettes will always be among the “desirable” and a good investment. Vette

2020 Corvette…Who Cares What Others Say!