With 425 hp and a four-speed, it doesn’t get much better than this 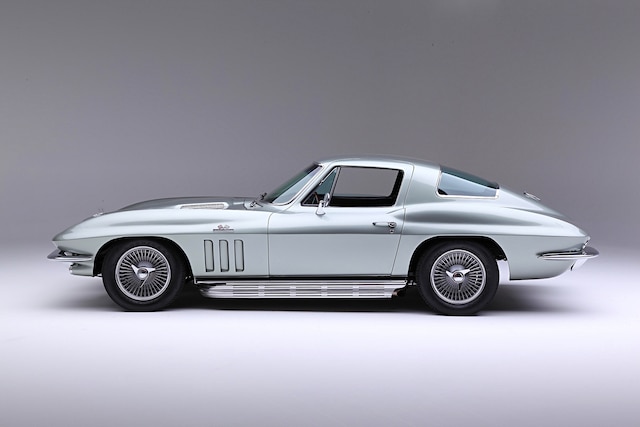 If you want to talk collectable American classics, it really doesn’t get much better than Corvettes. They were never intended to be commuter cars bought as the only means of transportation and driven into the ground. Heck, they only have two seats so you can’t even take both kids for a ride, let alone your significant other and the family pet. Whether you’re living the single life and you’ve saved up for months to get your dream ride or you’ve got a family and years of hard work have afforded you a new toy, Corvettes have always been intended for fun. Combine those elements with legendary performance plus a rich history in racing and you can bet these cars will accrue significant value over the years.

As with most things in life, there is a hierarchy of sorts when it comes to what makes a Corvette collectable. Usually it’s the combination of rarity and performance that moves any given car higher up the list. The more performance-oriented options the car has, like a bigger engine and fine-tuned suspension, the more desirable it is. Likewise, the fewer copies that were made (and thus fewer that exist today) the more people are usually willing to pay. Assuming there was such a distinct ranking scale for Corvettes, the big-block 1966 coupe owned by Ted Stevens of Los Gatos, California, would certainly be near the top.

Stevens’ coupe was ordered with just about every desirable option available at the time, and he even has the original window sticker to prove it. The heart of the Corvette is the biggest and baddest engine available for 1966: the 425-horsepower 427ci big-block. If you’re really savvy with your Corvette options, you’ll recognize this as an L72, which added $312 to the original sticker price of $4,295. 1966 was only the second year Chevrolet offered a big-block in Corvettes and it was the first year for 427ci engines. It was also the only year the L72 was offered, making it pretty rare with just over 5,000 total Corvettes ever produced with this engine. Stevens’ coupe was also ordered with the K66 transistor ignition to deliver a stronger and more reliable spark to the high-horsepower engine. The final piece of the power puzzle for the coupe was the N14 side dual exhaust, a $131 option worth every penny.

The rest of the drivetrain was no slouch either. While it wasn’t ordered with the holy grail, ultra-rare M22 heavy-duty, close-ratio manual—only 15 vehicles were sold with this option in 1966—it was equipped with the M21 close-ratio four-speed. Pair that with the Chevrolet Positraction rearend and it’s clear that this Corvette was built to perform.

The performance-oriented option list doesn’t stop there. Stevens’ Corvette was ordered with every brake and suspension upgrade available for 1966, including the rare J56 heavy-duty brake option. Only 382 of the 27,000-plus Corvettes built in 1966 were equipped with this option. Other factory handling upgrades include vacuum power brakes and F41 special front and rear suspension. Put all those performance options together in the lightweight and short wheelbase Corvette and you can imagine that no other factory vehicle could even come close to keeping up with this car back in the day.

The exterior of Stevens’ Corvette still wears its original color: Mosport Green. Like other aspects of the car, the hue is yet another rare option adding to its collectability because it was a one-year-only color for 1966. The other standout exterior feature of the car, not forgetting those iconic side pipes, is the P48 cast-aluminum knock-off wheels. This was a carryover option from 1965 with the only difference being dull-finished center cone and the area between the fins painted dark grey. Less than 1,200 Corvettes were produced with this option in 1966, yet again, adding to the overall collectability of Stevens’ coupe.

While the exterior and under the hood was all about sports car looks and performance, inside the cabin this ’66 is quite luxurious. Interior options included black leather trim, teakwood telescoping steering wheel and power windows. Stevens’ Corvette also had the AM/FM radio and tinted glass.

The previous owner restored the big-block ’66 before Stevens’ purchased it 15 years ago. Since then, he has resisted the urge to change or modify anything on the car, preserving its originality and desirability. While we here at Vette are generally fonder of seeing Corvettes that are used as they were originally intended, there’s no denying the value of keeping some around that haven’t been beat on or modified beyond recognition. There’s certainly something to be said for the experience of a 50-year-old running and driving piece of history that remains just as Chevrolet designed it over a half-century ago. Vette

How to sleeve and save a numbers-matching Corvette block with help from Summit Racing.

» Read More
Build a Sleeper L72: When 425 Horsepower Is not Enough for Your Restored Chevy

The SplitRay 1966 Corvette built for Dennis Johnson by The Auto Shoppe Raises the Bar for C2 Coupes.