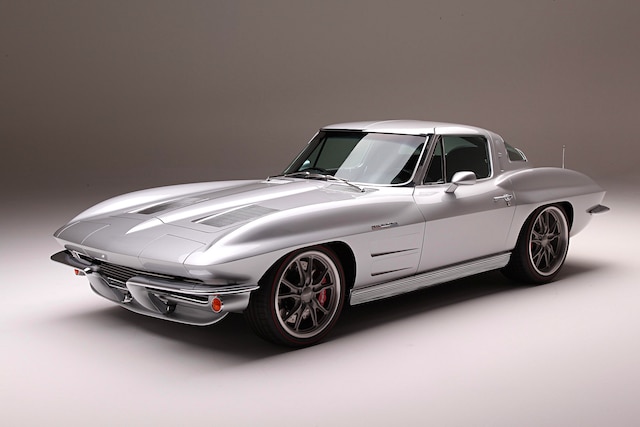 There’s a lot more to Ron Brown’s 1963 Corvette Sting Ray than meets the eye. Yes, the obvious is it’s a silver split-window coupe with larger custom wheels and wider tires, but that’s just the tip of the iceberg.

Going back to its earliest days, this particular ’63 was bought new by a doctor in Sioux Falls, South Dakota. The doctor let his son take it to college in Minneapolis where it served year long. Through Minneapolis winters the Corvette toiled as a common transportation car trudging through salt-laced slush until eventually it was crashed hard, destroying the frame and shattering the front half.

There wasn’t much left of the ’63 by the time Ron entered the picture. He bought a stage-four basket case suffering from extreme rust damage and crusty delaminated separations of broken fiberglass. Typical for a Rustbelt Corvette, the birdcage was rusted beyond repair. Ron sourced a rust-free birdcage from the remains of another Sting Ray body and scrapped the stock frame. It’s highly unlikely Ron’s basket case ’63 was one of the 199 Z06 Corvettes produced in 1963, but one thing is for sure, the car is now every bit of a 1963 Sting Ray coupe constructed beyond modern Z06 specifications.

The undercarriage is a work of tubular art. The stock ’63 chassis and suspension were tossed in favor of a SRIII Motorsports Stage II tubular frame uprated with C6 front suspension, an IRS third member in the rear and Viking coilover shocks at all four corners. The differential is a 3.70-geared Currie 9-inch with a Truetrac unit housed in a Dutchman housing. Rated to withstand 1,000 horsepower, Driveshaft Shop Porsche CV axles are mated to Corvette hubs. Braking is handled with 12-inch Wilwood disc brakes in the rear and 14-inch Wilwood disc brakes in front. For rolling stock, Diamond Back redline radial tires are mounted and balanced on Budnik billet aluminum wheels.

Typically, a big-block Stinger hood ends up on a small-block Sting Ray to bode big things have happened under the hood in the horsepower department. Ron went the sleeper route maintaining the ’63 hood, but kicked the horsepower up to 630 with a Doug Rippie built LS. It’s a square motor, Doug started with a brand-new LS7 block and laid an Eagle 4.125-inch stroker crank hung with Eagle rods, and 4.125-inch bore 11.2:1 JE pistons. Valve action begins with a DR Motorsports proprietary grind Comp camshaft and related Comp valvetrain components linked to a pair of DR Motorsports-modified LS7 heads with a port-matched intake manifold and fuel injection.

There are two more top gears than an original Z06 came equipped; Ron’s modern take on the pricey $1,818.45 1963 option uses a six-speed TREMEC. And there are two exhaust route options available to a SRIII Motorsports frame buyer: side pipes or undercar. Ron chose the latter and his shop custom-fabricated the exhaust from LS7 headers routing into a pair of MagnaFlow stainless steel mufflers. The cooling system features a Ron Davis Racing Products radiator. A Ron Francis wiring harness customized to suit the needs of this car satisfies 12-volt current demands.

Ron handled a fair amount of the early stages of construction and the chrome plating at his business, North Star Plating in Brainerd, Minnesota. From Minnesota, the ’63 was sent to Squeeg’s Kustoms in Phoenix for completion. The car showed up with the body on the SRIII chassis and in black gelcoat. To accept wider rear tires the quarter-panels are 1 1/2 inches wider than stock with larger wheeltubs, and SRIII Motorsports narrowed fiberglass floorpan kit. Squeeg’s cut the shattered nose off at the firewall and grafted on a new nose. The fitment of the body gaps and the durability of paint materials exceed what the factory did and sprayed in St. Louis. Squeeg’s used PPG products from start to finish; the silver PPG paint is a custom mix reminiscent of the ’63’s original color Sebring Silver.

BW Upholstery, a one-man shop in Scottsdale, Arizona, did the custom interior. Brian Willingham explained how the interior is a far cry from the spartan surroundings of an original ’63 Z06. Instead of radio and heater delete plates, one will find the controls for Vintage Air air conditioning and AM/FM stereo radio with Bluetooth. To give the stereo a full sound, premium quality rear speakers were installed. Brian replicated the OE look of the dashboard speaker grille over the rear speakers and went to extra lengths to conceal retractors for three-point seatbelts.

Brian began with a pair of Glide buckets and then modified the shape extensively, then enlisted friend Trevor Hauan to hand form aluminum seatbacks. All of the interior panels were cabinet worked from 1/8-inch Baltic Birch plywood. The upholstery is Relicate black full grain leather with perforated leather inserts on the custom door panels. Ron was very specific he wanted the interior of Corvette sound proofed to the extreme. A trio of competing brands beneath the black German square weave carpet is a layer of Dynamat topped with Vibro Solution damping mat and Second Skin Damplifier. Inside the doors and packed into the quarter-panels is Vibro Solution’s 35mm sound absorbing foam.

The steering is also an upgrade over 1963 issue that happened using a Flaming River 1963-’82 Corvette rack-and-pinion cradle kit. A Flaming River tilt-steering column completes the package and is topped with a leather rimmed three-spoke steering wheel. Full instrumentation is hybrid analog/digital gauges from Dakota Digital.

Ron Brown’s 1963 split-window coupe is a perfect example of what the factory would have built back in ’63 had the technology existed, and an even better example of how an old Corvette can survive on the road, jockeying for position amongst modern cars. Vette

Exactly where did the 1963-1967 Corvette Sting Ray Coupe’s iconic “stinger” roof shape come from? The answer is a story that will astonish you.

» Read More
Was There Ever a Production Corvette Built With a Backseat?

A reader asks Vette Magazine if Chevrolet ever made a production Corvette with a backseat.

Check out this archival tech story about Man-A-Fre induction for Corvettes.

The Grand Sport started out in 1962 as a pure outlaw racer. By 1996, it became a special edition and in 2010, the most popular production Corvette.