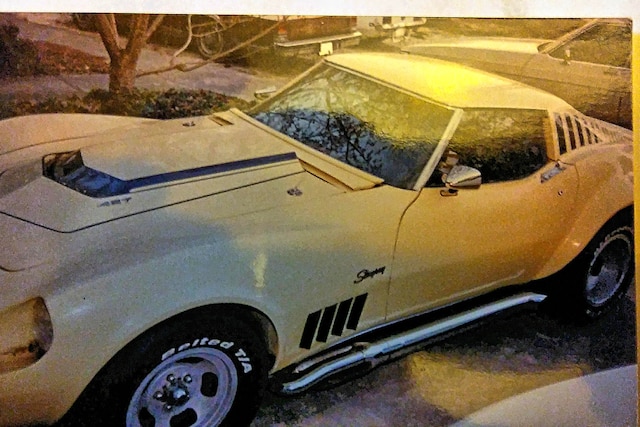 Joe Tandle was extremely excited when he found a 1969 Corvette for sale on eBay with “Motion” fiberglass body parts.

“I love all Motion Corvettes, especially the Motion Phase III GT. The headlights, the hood, the fastback rear window, the reverse gills, the fender flares ... I just love the look.”

Right off the bat, however, Tandle knew this 1969 was “not originally a Baldwin car and did not go through Motion Performance.” So, what was left of the Motion heritage?

This is where knowledge gave Tandle an edge over other potential bidders. Most Corvette enthusiasts know about the radical cars that Joel Rosen built at Motion Performance in his shop at 598 Sunrise Highway in Long Island, New York. They were the supercars in the Fantastic Five: Impala, Chevelle, Camaro, Nova and Corvette from 1969-1971.

Sometime in the 1970s, Pat (last name unknown) bought parts from Joel Rosen to make his 1969 Corvette look like a Motion Phase III GT. The car was then sold to Arthur Green, as seen here with an L88 hood in place of the Motion hood, which Tandle did receive with the car.

What makes B-M cars such—as a Corvette more than a modified—is their connection to Baldwin Chevrolet. These cars were invoiced brand-new with the Motion mods, so the window sticker gives them the blessing of being 100 percent stock. Cars that Rosen modified with the same Motion modifications, however, are not “stock,” with the new-car blessing. However, these cars were built by Rosen to a formula and are very collectible.

This is where the story gets very interesting. Tandle described cars with authentic vintage parts from Rosen as “catalog cars,” an interesting third version of Motion Performance that is gaining traction in the hobby.

Tandle says he is not an expert, which he is though he may not realize this. Recognizing the version #3 above, the week before Thanksgiving in 2016 he purchased this 1969 Corvette, which had “no engine, no transmission, no steering column, no pedals.”

As found, the 1969 Corvette had the fiberglass components of a Motion Phase III GT, plus Ansen Sprint wheels that were also part of the package.

This car was an estate/barn find, the ad read, and painted yellow, but originally code 990 of Monaco Orange, produced on 12/26/68, and shipped to dealer code 460, zone 15 to Norton Chevrolet in Philadelphia.

The good news for Tandle was the car had the major body parts of a Motion Phase III GT: Opel nose headlights, hood, fastback glass, reverse gills and fender flares.

“There’s a difference between a clone and a catalog car because it has body parts bought from Motion. Anybody that’s been around Motion cars, I think they can tell the difference of a real Motion part and a non-Motion part.”

Joe Tandle was very happy to buy this project Motion “catalog car,” as evidenced by the smile on his face when he loaded the 1969 Corvette on his trailer.

Starting from what looked like a Corvette shell; Tandle faced a daunting task to build this 1969 coupe to the Phase III GT’s original like-new beauty in which the buyer envisioned in the 1970s.

Tandle also found and had built a 427 to Joel Rosen’s 550-horsepower configuration so his 1969 Corvette would not just look like a Phase III GT, but run like one. Vette

Reverse-facing side scoops were part of the Phase III GT, seen here intact, but in need of work.

Joe Tandle said, “My wife (MaryLynn) is so smart, I tell you. I love her. She said this is not a clone! This is a Motion Corvette!” Tandle presently has three Motion Corvettes.

The engine was gone.

Joe Tandle picked up the car at a salvage yard in Raleigh, North Carolina, where the car almost went to the crusher.

Junior, at the salvage yard, checked out the car’s heritage and found out through Joel Rosen the car had Motion body parts, but was not a Baldwin-Motion or a Motion-modified Corvette.

Joe spent 1,500 hours restoring the car after work and weekends over an 18-month period.

No steering column or pedals and no transmission came with the car.

The finished car is a stunning. Joe said, “I love the cars and I’m learning constantly about them. I try to get as knowledgeable as I can. I don’t claim to be an expert, just somebody that gets real excited about these things.”

Used in BFG posters and other marketing content, this 1969 Corvette is as famous as Corvettes come.

Stock is cool, but for Efrain Diaz, the call of the track was much louder. His 1969 Camaro went from a rolling mess to a race-winning corner-carver!