This Versatile ’55 Chevy Bel Air Can Do It All

No garage queen, this trophy-winning ’55 travels the country 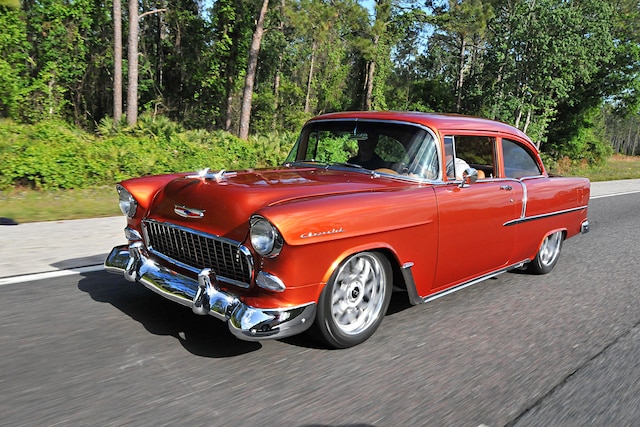 Cool cars wind up in our garages for lots of reasons. Some are functional transportation, some only drive a quarter-mile at a time, while others are rarely seen outside the show circuit. Toby Jones has always been intrigued with the ’55 Chevy and dreamed of creating a uniquely versatile version of this popular classic. Self-employed and owner of TJ Plumbing in Holly Hill, Florida, Jones has been a longtime enthusiast even though this is his first full custom vehicle. Purchased way back in 2006, the car has received a series of underway upgrades designed to make it the perfect long-haul cruiser. He enjoys traveling to distant car shows around the country, including one 3,200-mile jaunt from Florida to Michigan on the Power Tour. Each long trip suggested more opportunities for improvement, culminating in a car that is loaded with style, handling, power, and a raft of elegant details.

The story begins back in 2004 when the search began in earnest. It took almost two years, but he finally found a ’55 in fairly good shape. With a few bolt-on parts, it was the perfect ride for local cruise events. Before long, however, the 60-year-old technology reared its ugly head and it was time for an infusion of modern aftermarket improvements. It was a major undertaking. Working in his garage, Jones separated the body from the chassis and began comprehensive revisions to the frame. His efforts would make the car handle like a slot car while his attention to detail would make the underside of the car as photogenic as the top. The original factory crossmembers were eliminated and replaced with 1.5-inch tubular K-members, followed by a double framerail and tubular torque box. All the holes were filled, the body mounts boxed in, and the frame was painted a shiny silver metallic.

Since autocross-level maneuverability was the goal, the long list of high-performance handling upgrades began with Global West tubular control arms up front along with drop spindles and power rack-and-pinion steering. A NASCAR Cup Series 1 1/4-inch splined front sway bar with 1/2-inch plate arms teamed up with a Sportsman Series drag race rear bar to ensure flat cornering. The bars were augmented with QA1 adjustable coilovers on all four corners. To handle the planned powerplant, a rebuilt 9-inch Ford rear was fitted with 3.55 gears, 31-spline Strange axles, and a Currie center chunk, all held in place by a RideTech parallel four-link. Since brakes are an important part of going fast, stopping power was guaranteed with Wilwood discs using drilled-and-slotted rotors and six-piston calipers.

A Rock Valley stainless steel fuel tank with a fuel-injection pump inside feeds the new engine. Transforming the chassis into a roller are the Billet Specialties Grand Prix 18- and 20-inch wheels, polished with brushed centers and wrapped in Nitto rubber. One glance will convince you that the underside of the car is a work of art.

With such a high degree of sophistication in the chassis and suspension, an equally impressive powerplant was a must. Jones started out with a 355ci Chevy small-block, decked and align-honed by Express Racing Engines in DeLand, Florida. Internally, it is fitted with an aftermarket crank, machined and balanced connecting rods, and TRW flat-top pistons. A Crane cam with a double roller timing chain bumps the stainless steel valves in the Holley aluminum 20-degree cylinder heads using Crane Cams Gold series 1.5:1 rockers. Sending fuel to the ACCEL 36-lb/hr injectors is a polished Holley Avenger EFI Stealth Ram system, which is fed fresh, cool air from a custom intake screened by a pair of K&N filters. ACCEL EFI electronic ignition lights the fire with Hooker silver ceramic-coated headers dumping spent gases into a black ceramic 2.5-inch exhaust system. The Pypes mufflers announce the car’s arrival with an impressive performance rumble.

Jones chose a PRC radiator and A/C condenser combination along with an aluminum mechanical water pump and two 12-inch electric fans to ensure temps stay in the green. Powering all the accessories is a polished Billet Specialties V-drive belt system. Unique items include that hand-fabricated air intake with a pair of K&N filters and carbon-fiber tubes as well as custom-made valve covers for the perfect finishing touch. Glass-smooth inner fender panels and the recessed firewall add to the eye appeal of the beautiful V-8. Added up, the combo delivers 475 horsepower to the 4L60E four-speed automatic, upgraded with a ProTorque billet 10-inch converter. Jones gets lightning shifts (125-milliseconds) thanks to the Twist Machine Shrifter paddle shifters managed by a Compushift II trans controller.

Throughout the many improvements, the “complete, but never finished” car would be pressed into service, heading off to Pigeon Forge, Tennessee, for the Grand Rod Run or North Carolina’s Tail of the Dragon. In 2011, Jones took the car on its longest adventure, the Power Tour from Florida to Michigan, driving 3,200 miles in 10 days. Mechanically, the car was a pleasure and handled the long distance ride without breathing hard, but traveling took its toll. Cosmetics became the next rejuvenation concern. Chips and dings, coupled with repair efforts by previous owners meant it was time to give the old girl a new look. In 2012, he went back to the garage, beginning a two-year effort that included new quarters, new rear pan, and new fenders, all designed to perfect the exterior. At the same time, mediablasting, PPG epoxy paint, and Ballistic Hollow Point sound deadening got the interior ready for its new look. Jones built his own panels for The Upholstery Man in South Daytona, Florida, to wrap in a combination of saddle vinyl and pleather. To monitor the high-performance engine, he redid the dash using Haneline 4-inch analog gauges inset into a carbon-fiber housing. The combination of a Billet Specialties wheel, paddle shifters, and ididit column keeps the driver in close touch while Vintage Air A/C ensures occupants stay cool during warm summer adventures.

Concert hall level entertainment during those long days on the Power Tour comes from the sophisticated Alpine 7-inch VGA touch screen monitor in the center console that teams up with the Command unit in the armrest and the Alpine Pro VPA-B222 brain mounted in the trunk. In addition to satellite radio, CD player, Bluetooth connectivity, and rearview camera, the Alpine controls the ARC Audio amp, also in the trunk. It powers the ARC Audio speaker mix consisting of a 12-inch sub, 6x9s in the rear package tray, and 6-inch components in the kicks. The trunk was upholstered to match and now holds a pair of Optima batteries hidden behind the rear wall with the rest of the stereo electronics. The final step in this years-long process was the striking Axalta Orange Metallic Sunburst paint.

Toby and his wife, Sheri, enjoy taking the car to local cruise-ins and car shows. Has it become too pretty to drive? Hardly. Plans are afoot to participate in the Pigeon Forge Grand Rod Run in Sept 2018 and Toby would like to do another Power Tour. Now that it’s once again complete, he is more than happy with the results. “I wanted this car to be like no other and I wanted people to see a different approach to custom work.” We think his versatile ’55 does just that!

Ridding your Tri-Five of Decay with Replacement Rear Quarter-Panels

How to Restore the Internal Structural Integrity of your Tri-Five with replacement rear Panels from Real Deal Steel.

» Read More
This 1955 Chevy Convertible is the Ultimate PCH Cruiser

In the world of Newport Beach, California high-dollar exotic cars are a dime-a-dozen but Andrew Gabriel wanted sometime with a little more style…

Here’s what the readers of Super Chevy are up to with a pair of Tri-Fives and a 1966 Nova SS.

Don't miss out on this historical feature on a1955 Chevy Bel Air Indy 500 pace car. Revisit some Indy 500 memories!