Speed Freak: How Ty Buckner got hooked on smoking … the competition 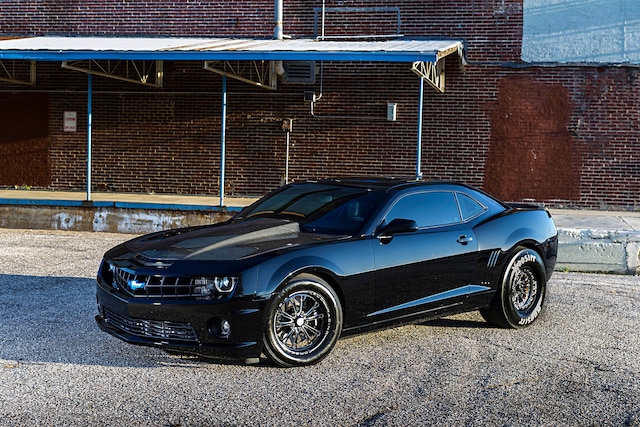 When is “enough” enough? For most people it’s a brand-new muscle car. It sure was for Ty Buckner when he bought his 2011 Camaro SS. “It was my first new vehicle purchase,” he reminisces.

The story of his fifth-gen is like one of those afterschool TV specials that starts out innocently enough. In this case he dabbled with bolt-ons. “When it was like long-tubes, intake, and tune it did 12.2,” Ty remembers.

But then in the winter of 2012 he got into the hard stuff. Specifically, he started doing nitrous. A 150-shot knocked the car into the mid-11s.

The hook officially set, Ty descended a slippery slope of modifications, each more extreme than the last. A set of ported heads, a cam, and a manifold got it closer to the 10s. But then the nitrous habit got out of control. Laypeople can hardly handle one stage; Ty needed two to feed his growing habit. A 150- and a 125-shot broke the 10-second barrier.

But not even the double dose of giggle gas could take Ty back to that first rush. So in the fall of 2015, MS Tuning’s Matt Sourian showed him what a Vortech V-7 YSi supercharger, some E85, and a fuel system to handle it could do. What it did was push the car to 10.4 at about 130 mph.

Then, on the rollers at a shop that shall remain nameless, the bottom end finally tapped out. A funny thing happened while Ty started shopping for parts to build the replacement: a 440-inch LSX built by Houston’s Late Model Engines turned up. And with only 9.6:1 static compression, it was perfect for a boost build.

“It was still a six-speed car and I was trying to shift it fast enough,” Ty admits. So in anticipation for even bigger power, Ty swapped the six-speed manual for a TH400 automatic. Well beyond the traction limits of tires for 17-inch wheels, he also converted to 15s with a Carlyle Racing kit. That’s the point where the rollcage seemed like a good idea.

The new engine and suspension combination put the car right at the threshold of 9-second zone. “It’s just a street car,” Ty says, almost apologizing. “It still has A/C and heated leather seats. It’s a heavy, heavy car. It weighs over 4,400 pounds with me in it.” And that, we add, is with both a Seibon carbon-fiber hood and decklid.

But it also goes that fast with only 18 psi, a figure limited largely by the air-to-air intercooler. And Ty is pretty far from hitting rock-bottom as far as his need for speed goes. “I’m going air-to-water this winter,” he says. And plans call for a new power-adder. More than likely a turbo ... a big turbo. “ It’s more motor than I wanted, but I bought it for the price of the heads that I was going to put on the one I was building,” he says. “So really, how could I say no?”

So when is “enough” enough? Probably when it’s too much. Because as most of us can testify, if some is good, then more is better. And too much? Well, once you’ve done it, you’ll know it’s just right. CHP

Take a look back at some of the fastest fifth-gen Camaros from the 2nd annual Chevrolet Performance Parts LSX Challenge Series!

To find out what goes into each of LMR’s fifth-gen Camaro performance packages, we took a trip down to the shop to check them out up close.

Stitchcraft turned a behind-schedule SEMA Camaro convertible into a timeless masterpiece. To have an OEM give you a project vehicle sounds pretty cool, right?

Checky out James Stacy's 2011 Chevrolet Camaro SS! Stacy is the proud owner of this beautiful Victory Red Camaro and is a drag racer at heart.

We take a close look at performance upgrades for the Camaro V-6 engine, from basic bolt-ons to computer tuning. If you think you need an LS3, think again!