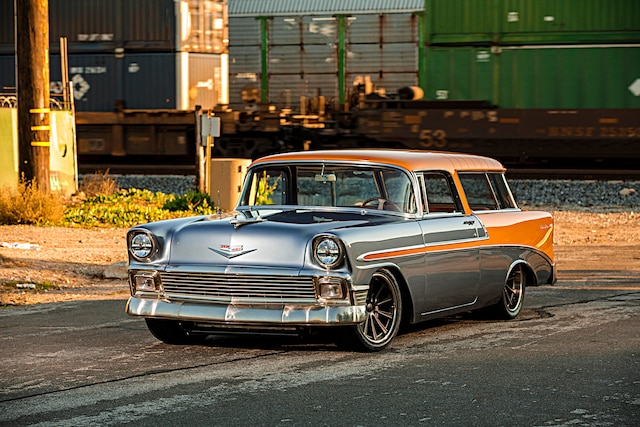 Hot rodding used to focus on just making cars fast—bolt on a bunch of speed parts, beef up your transmission and rearend to handle the added power, and maybe cut out some unnecessary weight. It might get down the road pretty fast after all that but you’ll certainly have sacrificed more than a little practicality. These days, with the advancement of technology and the rise in popularity of restomoded muscle cars it’s not uncommon to see an old car that is fast in a straight line, can take a corner like it’s on rails, and even have some modern conveniences. Throw that tried-and-true combination in a station wagon, and voila, you’ve got yourself one of the most fun to drive yet practical muscle cars ever. J.P. Dwyer and his father, John, decided to take that concept one step further.

“At the time, I was huge into diesel trucks,” recalls JP. So when he and his dad were tossing around ideas of what to build next, JP convinced John to build a diesel-powered muscle car. They wanted something useful; a show car that was able to do more than just wow the crowd. With that in mind, they started searching and came across a 1956 Chevy Nomad in Colorado. The car was in pieces and had no engine or trans so it was a perfect candidate for their unorthodox restoration. After John bought the Nomad it sat around his place in Gilbert, Arizona, for a few years while he gathered up the finances and parts to get the project started.

One day, JP was surfing the web and he came across a Craigslist ad for a wreaked 2003 truck with its 6.6L Duramax LB7 diesel engine and transmission still intact. Better yet, it was advertised to have just under 1,000 miles on the truck! It was finally time to get the ball rolling on the diesel-powered project.

Work started on the ’56 at a shop that will remain nameless because, as it sometimes happens, things didn’t go as planned so John took his Nomad back and found another builder to finish the job. He ended up contacting James Crosby of James Crosby Design out in Ontario, California, and having the project carried on there.

By the time the Nomad made it to James Crosby Design it had already undergone some bodywork and was painted. The paintjob John had chosen to go with was a traditional two-tone, but his colors were anything but traditional. He always liked the orange hue of the early 2000s Lamborghini Gallardos, so that became half of the paint scheme with the other half being a custom silver. The rest of the trim and finishing touches were handled at James Crosby Design. To break up the orange and silver paint, all the original Bel Air trim was put back in place, but not before getting its own custom touch. Instead of going the usual chrome route, John decided to have all the trim nickel plated and brushed. The plating was done by Millennium Polish and Chrome in Ontario, California, then James hand-brushed everything for a stunning end result.

Now the moment you’ve all been waiting for—the engine. As mentioned before, the diesel powerplant they sourced was an LB7 Duramax. For those who aren’t diesel aficionados, the LB7 is the GM 6.6-liter V-8 produced beginning in summer 2000. The LB7 is turbocharged, direct-injected, and features four valves per cylinder. These engines make some healthy power stock, but John and JP wanted to squeeze a little more out of theirs. To do that, they had the engine brought over to L&R Engines in Santa Fe Springs, California, where it was given a refresh and a little upgrade. Remember how JP found this engine with an advertised 1,000 miles on it? Well, when L&R got to tearing the engine down to give it a once-over, the engine looked even newer than that, and they told JP they reckoned it only had 300 miles on it.

So, it was clear they had a great engine to start with, now it was up to L&R to put it back together and get it making some real power. To get the results they were looking for, all they really did was upgrade the turbo to a ball-bearing unit from Garrett so they could push a little more boost through it. Instead of the factory 16 or so psi they were now able to run 18-22 psi. Pair that with some ace tuning and the LB7 was now making a consistent and reliable 700 horsepower and 900 lb-ft of torque. James Crosby Design custom-fabricated the exhaust system, which utilized the factory LB7 exhaust manifolds, 3-inch stainless steel pipes, and MagnaFlow mufflers. What makes this setup even better is that they were able to retain most of the stock parts like the intercooler and radiator, meaning, according to JP, “you can take it to a Chevy dealer anywhere across the country and they can work on it.” To handle all that torque from the Duramax they installed an Allison LTC1000 Stage Three from ATS Diesel Performance. The transmission is a five-speed automatic with a 1,200-stall converter.

Underneath the Nomad, James fitted a pretty trick and very modern suspension. John and JP wanted the Tri-Five to not only take a corner and ride comfortable on the street but also make use of the torquey diesel and pull a 17-foot Airstream trailer. So, up front James installed TCI Engineering spindles and A-arms paired with RideTech coilovers. The rear is where it gets a little more technical, starting with the rearend, which is a Ford 9-inch from Currie Enterprises with a locker and 3.00:1 gears. Then, James used TCI’s four-link and RideTech ShockWave airbags paired with a valve from a diesel truck that senses added weight and self-levels mechanically—no wiring or hydraulics required. Since the wagon will be hauling you-know-what and a trailer, they fitted four-piston Baer brakes at all four corners with 13-inch rotors in the front and 12.5-inch rotors out back.

Forgeline wheels and Nitto tires make sure the ’56 can get a grip and look good doing it. The wheels are 18x10 up front with 18x11.5 rollers bringing up the rear. To match the look of the car, the spokes were powdercoated by Concept Powder Coating in Rancho Cucamonga, California, and the barrels were nickel-plated by Millennium Chrome. The NT05 tires measure 275/40R18 and 315/35R18, front and rear.

The interior of the Nomad was done by Elegance Auto Interiors out of Upland, California, and is just as stunning as the rest of the car. The seats are modified stock, wrapped in coco and gray leather with door panels to match. They seamlessly integrated the Dakota Digital HDX gauge cluster into the dash wrapped in the same coco leather as the rest of the interior. The custom center console is home to dual nickel-plated cup holders, a Genie shifter, and a pair of vents blowing cold air from a Vintage Air unit under the hood. Also found in the center console is a Bluetooth head unit from Kicker that controls four speakers and a subwoofer installed by Art of Sound in Upland, California.

A little backlash from the Tri-Five community was to be expected, with people asking, “Why would you do this to a perfectly good Nomad?” JP’s answer to that is a simple one, “We didn’t. We took a car in pieces and gave it new life.” But they didn’t just want to give it new life. JP told us, “The end goal was to have something no one else has done before.” As far as we are concerned, a show-quality 1956 Chevy Nomad with a 700-horsepower turbo diesel that handles like a champ and can pull a 17-foot Airstream trailer at 80 miles an hour definitely fits the bill.

Cool, Crazy, and Crazy-Cool Cars of the 2016 Goodguys Summer Nationals

We take a look at all the interesting cars scattered around the grounds here at the 2016 Goodguys Summer Nationals.

Check out our readers' rides for April 2013. These bow tie keepers include a 1967 Chevy Camaro RS, a 1964 Chevy Chevelle, and more! Want to see your ride in Super Chevy? Send us a high-res digital photo!

Mecum Anaheim 2013 is approaching quickly and this beautiful 1956 Chevy Nomad restomod will be hitting the block.

Check out John Bolsted's recreation of the Waldorf Nomad. Combines with the front end of a 1954 Chevrolet Corvette and a 1956 Chevy Nomad is a close match to the one John say many years ago. Only at www.superchevy.com, the official website for Super Chevy Magazine.

Check out Mike "Mad Dog" Dodson's 1956 Chevy Nomad which has a GM Performance Parts ZZ4 crate engine and a perfect two-tone black and white paint job. Only at www.superchevy.com, the official website for Super Chevy Magazine.

This Modified Eliminator, go-fast, dragster guy tricked out his '56 Sierra Gold Nomad before taking it to Tijuana where $150 and a case of cold beer would get you a complete interior and one-inch pleated seats-Super Chevy Magazine