A twin-turbo 1957 Chevy that brings refinement to Pro Street

The Right Stuff: Bagged and Blown 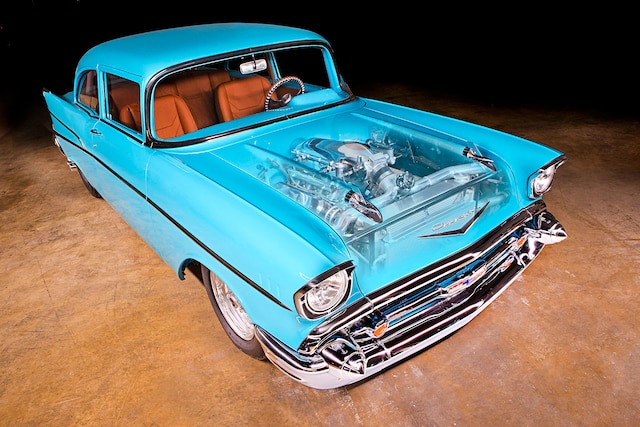 Building a car is in many ways like putting together a great dish. If you mix the right ingredients together, chances are that you usually end up with something tasty. So, based on that premise, let’s take the cooking analogy one step further and say that great car fabricators are like great chefs. Folks willing to pay top dollar put great trust in them to cook up something magical, whether it’s on a plate or on four wheels. Building cars, like cooking, is big business and this is clearly evident by all the reality TV programs dedicated to both genres. While the central characters in these shows are usually the stars, they always rely on a group of talented, handpicked individuals to get the job done because running a business is usually a full-time job. This brings us to Long Islander, Danny Steininger and his 1957 Chevy Bel Air 210 post model. While he isn’t a master chef, we can tell you that he is a successful business owner who has many coals in the fire. Running a large automotive business consumes a great deal of his day, which leaves him little time to indulge in what he is passionate about—wrenching on fast cars. Since he can’t devote much time to his passion, he has had to find someone he can trust to put a high calorie recipe together for his ’57.

Acquired via an eBay auction, the ’57 was an exceptionally nice looking car with a stroker 383 small-block tucked under the hood. It was bathed in some sort of burgundy color and had an original looking interior, a combination that wasn’t setting the world on fire. Growing up, Danny was a big fan of Popular Hot Rodding’s Project X ’57 Chevy, so his inclination was to do something with this ’57 that borrowed heavily from that car. With that in mind, he shipped the car over to Dave Kogan, at Kogan Motorsports in Oceanside, New York, for the work. This wasn’t Dave’s first rodeo when it came to putting something together for Danny. He had built a number of cars for him in the past, so the trust level between the two was firmly established to the point that he notes, “Danny came in the shop and just said, ‘Let’s pull it apart and get going.’” Before he actually ripped into the ’57, they both cooked up a plan for it. Set in stone was the installation of a pair of mini-tubs. However, the engine choice wasn’t as straightforward. “We kicked around the idea of doing a big-block,” Dave states. “We got away from that in favor of a big-inch LSX, but decided that was the wrong direction, so we eventually agreed on a basic LS with twin turbos. At that point, it all escalated from where it was originally supposed to be.”

As noted, the ’57 seemed to be in stellar condition when it rolled into the shop, but as they started pulling it apart, it was clear someone had put lipstick on a pig. When the carpet was peeled back they found vast amounts of body filler, which stretched all the way into the trunk area. More filler was found in all the exterior surfaces, so at that point the decision was made to replace all the body panels. Since Dave had sole discretion to farm out the repairs to who he thought was best qualified for a given task, he had the car shipped to D&D Impressive Auto Collision in New York City for the metalwork. As soon as it rolled into the shop, they started cutting the ’57 up and then hung just about every new body panel they could throw at it. After that, it was sent to Bona Fide Auto Collision in Patchogue, New York, for the bodywork and a few coats of period-correct Tropical Turquoise basecoat/clearcoat paint.

While the body was being massaged, Dave began assembling the heart of the ’57. The foundation that he started with didn’t come out of a GM crate—it was a seasoned 6.0-liter junkyard short-block out of a truck. The plan was to build a 418-cubic-inch stroker. Starting with the bottom end, his recipe consisted of a Manley crankshaft and pushrods, a set of Wiseco HD 9.15:1-compression pistons, and a Competition Cams “custom Kogan grind.” The short-block is capped with a set of LS3 aluminum heads, a Holley EFI Hi-Ram intake, Holley HP fuel injection, a 417 Motorsports air-to-water intercooler, and a pair of Garrett GT3582R turbos. Keeping temperatures under control is an aluminum Ron Davis radiator, while exhaust gases are expelled through a set of custom-made American Racing headers that feed into 3-inch stainless steel pipes mated to a pair of custom-made mufflers. Dave likes to build these mills for high horsepower, but also to be right at home running on pump gas. He has put so many of them together that he knows this combination of parts is guaranteed to easily pump out about 1,000 ponies at the wheels. Backing up that copious amount of power, he opted to bolt on a TH400 built by M&M Transmission in Jefferson City, Missouri, that utilizes a 3,500-stall converter sourced from ProTorque in Medford, New York. That combination delivers the power to the 3.50:1-geared Ford 9-inch rear.

Hidden underneath all that fresh sheetmetal lays the hardware for the perfect stance on the ’57. Up front, a Martz chassis was welded in, while at the back a Martz four-link unit was installed. It is bagged at all four corners courtesy of RideTech Air Ride Technologies. Dave completed the chassis upgrade with a Wilwood brake setup. There are 12-inch rotors and four-piston calipers all around. Rolling stock consists of 15x12 Weld Racing wheels wrapped in Mickey Thompson Sportsman PRO 29x15.5-15LT tires at the rear, and Weld Racing 15x8 wheels with Mickey Thompson Sportsman 6650 S/R Radial 26x8R15LT tires up front.

The last major piece of the puzzle was the interior. Since the previous one was just a clean version of what the ’57 rolled out of the factory with 60 years ago, that, too, needed to be upgraded. Danny had complete trust in Dave that he would have some killer stitchwork done to complement the rest of the car, so he had it sent to Bux Customs in Pottstown, Pennsylvania, for their magic. Shop owner Chris McClintock spent over 400 man-hours creating the fully custom-built interior that you see. Items like the front buckets were handcrafted from bare frames, while the rear bench seat was molded to hide the rear tubs. He also fabricated custom door panels, trimwork, and a center console to house the sat/nav unit, along with the heat and Vintage Air A/C controls. As the pieces came together, they were all covered in Hydes Tan Jaguar Nappa full grain leather with rosette perforations for detail. The attention to detail achieved in the interior also carried over to the trunk, where it received the same leather treatment, with the faux suitcases built to look fully functional, while cleverly hiding the turbo cooler cell.

Going back the cooking analogy, you can easily see that once the ingredients for this car came together, the end result was one mouthwatering dish, and if you’re thinking this is too pretty to beat on—guess again. One thing that Danny can never be accused of is not using his cars, and this ’57 gets enjoyed to the fullest.