Not Hacked: In an era when hacking up cars is the norm, stock sheetmetal can still get the job done 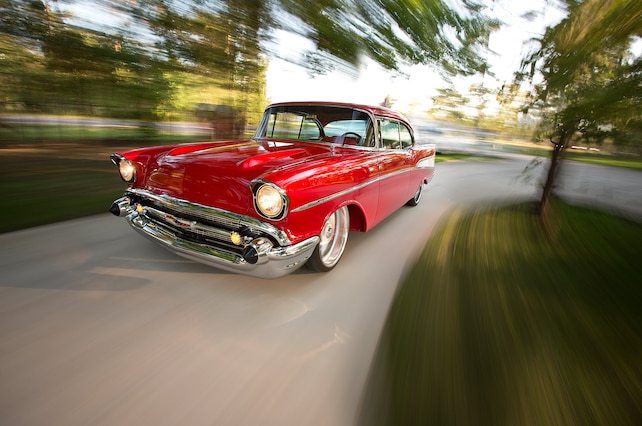 It seems so obvious, but overcomplicating things by performing too much cosmetic surgery to a car that already looks good is a surefire way to create something that’s too ... Picasso. Sure, a few freaks here and there might like it but to the rest of the world it’s just a strange, abstract version of its former glorious self. With inherently beautiful machines like Tri-Five Chevys, an aggressive stance and modern rollers are all it takes to enhance what’s already there. And wouldn’t you know it, we just so happen to have a ’57 Chevy right here with which to hammer the point home.

Like most kids that grew up in the ’50s, Mike McDonald lusted over Tri-Five Chevys. He was lucky enough to have owned both a ’55 and a ’56 Chevy in high school. Although the ’57 Chevy was his favorite year of the Tri-Fives he never owned one. “I always wanted to have a ’57 Chevy because I thought it was the prettiest of the three. I graduated high school in 1956, then got married right after that so I never got to build a ’57,” Mike recounts.

Nearly six decades later, a casual conversation turned into a serious car build. “I was at a car show one year, talking to Jeff Cameron from Dooley and Sons Hot Rod Shop. I was really happy with a ’70 Chevelle they built for me so I asked Jeff about building a ’57 Chevy,” he recalls. “He said that they had a ’57 Chevy at the shop with a very clean body that they found in El Paso [Texas]. Jeff offered to save it for me just in case I wanted to build it. I told him he didn’t have to save it because we could go ahead and get started on it right away.”

Although Mike offered some general guidelines for what he wanted, he gave the Dooley and Sons crew lots of creative freedom. “Mike pretty much turned us loose. He wanted a healthy, classy-looking car with a lot of power and modern ride quality, handling, and comfort,” says Jeff. “Compared to a ’55 Chevy, the ’57 is a flashier body style so we wanted to play that up with red paint, a custom red interior, and a 700hp LS motor with a Kinsler cross-ram intake manifold. We probably built Mike more car than he wanted, but everyone ends up with more car than they want or need.”

Starting with a clean West Texas car limited the amount of repair work required, but a shell on a rotisserie is still a far cry from a finished Pro Touring machine. From start to finish, Jeff estimates a total of 7,000 hours went into the build. “The car had been hit at some point, so the cowl was banged up pretty good,” says Jeff. “Other than that, the body was rust-free and super clean. The trunk floor was the only metal that needed replacement. All of the other sheetmetal is original.”

If the body was so nice to begin with, where did all the other hours go? Walking through the Dooley and Sons shop answers that question very quickly. Every aspect of every build—from custom chassis fabrication and sheetmetal work to paint and body and custom interior stitching to final assembly—all happens in-house under the same roof. Paint and bodywork alone consumed 1,500 hours of labor on the Tri-Five. A large chunk of the remaining 5,500 hours went into picking up where GM stylists left off back in the ’50s.

In order to let the stock body lines speak for themselves, body modifications are limited to simple decluttering and cleanup work. “We removed the fender louvers and took the bullets off the hood and smoothed them out. The door locks, hood emblems, and decklid emblems also got shaved,” explains Jeff. “The bumpers are factory three-piece assemblies that we sucked into the body by sectioning and welding them together. The firewall, inner fenders, and mini-tubs are all custom one-offs. We smoothed out the floorpan as well.”

While the Tri-Five’s sheetmetal looks mostly stock, the hardware lurking beneath it is anything but. Strapped between the framerails is a Don Hardy Race Cars 454ci LS small-block kicking out 722 hp. Based on a Chevrolet Performance LSX block, the combo boasts forged internals, Dart cylinder heads, and a trick Kinsler cross-ram intake manifold with individual runners and throttle bodies. The big Gen IV lump sends 684 lb-ft of torque back to a TCI Auto 4L70E transmission and a Currie 9-inch rearend.

To elevate the Tri-Five’s ride and handling to modern standards, Dooley and Sons replaced the stock frame with one of its custom Street Force chassis. Key features include heavy-duty twin A-arms up front, a custom four-link out back, and double-adjustable coilovers all around. Baer 14-inch discs clamped by six-piston calipers provide prodigious stopping power, while Nitto tires wrapped around Schott Mach IV wheels stick it all to the pavement.

By design, the end product is a car that still looks every bit as timeless as it did in 1957, but with a big wallop of modern updates. “We don’t want to start changing the shape and lines of a car just because we can. We’d much rather make a bunch of subtle changes that aren’t very noticeable but enhance the stock body lines,” says Jeff. “There’s a reason why Tri-Fives have been one of the most popular cars out for a very long time, so it doesn’t make any sense to start drastically changing stuff. That’s why rat rods were invented, so people can do stuff like that.”