Boosted Ambitions: When you want to go fast it’s hard to beat a big turbo 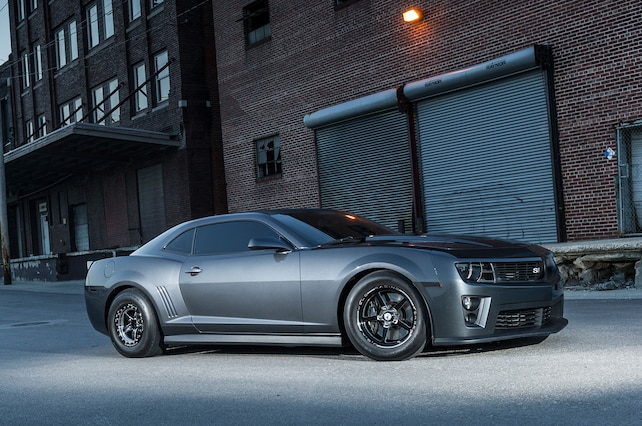 From the factory, the fifth-gen Camaro SS is one hell of a car. Power and performance that surpasses its rivals and ancestors, it has great looks and there’s plenty of room to customize and tune it to fit the owner’s personal tastes.

Justin Keith was no stranger to LS power and F-bodies when he bought his 2010 SS brand-new off the lot. He had a turbo-equipped fourth-gen before upgrading to the then-newest generation, a car that was equivalent to a land missile and could draw some attention at the Street Car Takeover (www.streetcar-takeover.com) events, a traveling quarter- and eighth-mile drag racing show and exhibition that is an arena for automotive gladiators to do battle in front of crowds of horsepower-thirsty, high-octane sniffing performance junkies.

Justin drove his new SS for about a year with only the mild mods of a cam and headers installed, but that was about all the time he could take before the Camaro was taken down to pieces in his home garage for some serious upgrades. Being a boost junkie, Justin already knew he wanted a turbo in the fifth-gen, but at the time no one had a front-mount, front-facing turbo kit for them. So, with caution tossed to the wind he began fabbing up his own turbo system based around a Precision X275 88mm G-Trim turbocharger. Justin fabbed up all the piping, including the intercooler, along with the other necessities to get everything into the fifth-gen.

The stock LS3 wasn’t going to survive the amount of boost Justin desired so it was shelved and a 408-inch engine was built by Dahmer Powertrain using an iron 6.0L truck block, forged internals, and stock LSA heads. The camshaft was a custom hydraulic roller profile designed by Futral Motorsports. Feeding the engine enough fuel is a dual Walbro 450 setup with an Aeromotive regulator. On the chassis dyno it cranks out over 1,200 rear-wheel horsepower on 24 psi of boost.

The car came equipped with a 6L80E six-speed auto from the factory but Justin knew that unit wouldn’t hold up to all the torque the turbocharged LS was going to put out so it was yanked in favor of a TH400 three-speed built by Mike Leighty with a Yank 3,400-stall converter, trans brake, and Hurst shifter. The combo sends power through a carbon-fiber driveshaft to a G-Force 9-inch rear with 35-spline axles.

Helping put the power to the ground is a set of RPM upper and lower rear control arms, BMR springs, and QA1 shocks. The front is beefed up with Eibach springs and QA1 shocks. The rear discs were upgraded to C5 Corvette binders for some extra stopping power to help the factory Brembo front brakes. Rolling stock is a pair of Weld Alumastar 17x4 front wheels with 28x5x17 M&H tires, and the rear rollers are Weld RTs in 15x10 wrapped in Nitto NT555R 275/50/15 tires.

At the track, the car ran a 10.92 e.t. at 149 miles per hour on 18 psi of total boost, no trans brake and no boost off the line for the first couple of shakedown passes on the quarter-mile strip at Muncie Dragway.

Just as Justin was getting the Camaro dialed-in and ready for some serious track time he picked up a new C7 Vette. Its siren song grabbed him by the arms and had his freshly built Camaro up for sale so he could buy a brand-new Vette. And, no surprise, he already has his eyes on a turbo install for that one as well. In fact, he was one of the first people to run the new LT1 full time on E85.

While he admits that being the first one to install such a performance mod, the results and attention the car got when finished were quite gratifying. And in the world of modern performance and competition, being the first to achieve such a feat is worthy of serious recognition.