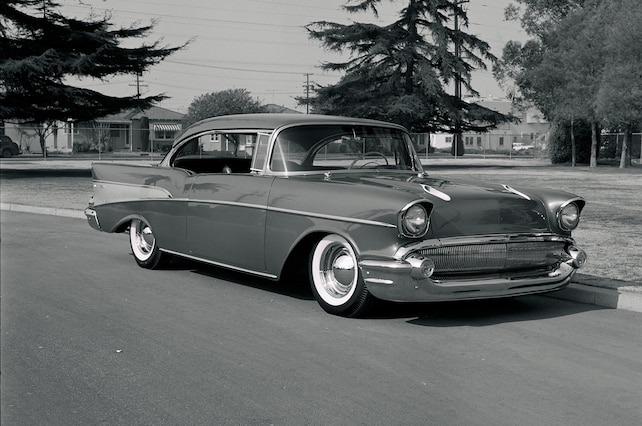 Reading the story about Phil Curry’s ’57 Bel Air in the July 1963 issue of Rod & Custom, it’s interesting how many times the editors seemed to be of two minds about this Chevy. The story’s title was “Stock but Nice,” and our story’s “Wild/Mild” headline came from the article’s final sentence, which called Curry’s car “the trend now in progress in California: a wild, but very mild, semi-custom for street ’n’ show use.”

That trend would be a counterpoint to other movements in the early ’60’s car customizing scene. This was a pretty crazy era. Darryl Starbird, Ed “Big Daddy” Roth, and Dean Jeffries were just a few of the customizers building show rods with Plexiglas bubble tops. Radically reimagined Model T roadsters were winning the prestigious America’s Most Beautiful Roadster trophy at the Oakland Roadster Show. And the truly wacky, sometimes TV-inspired customs, like the Munster’s Koach, Monkeemobile, and Boot Hill Express, were right around the corner.

In that context, Curry’s blue hardtop seems the model of understatement, even with its toothy ’57 Buick grille. He made sure the grille was the center of attention by shaving all the chrome trim off of the car’s hood, and then painting the highlights on the reworked hoodscoops in a tasteful, contrasting pearl. The door handles were shaved, too, as was the decklid, and a station wagon bumper was used in place of the stock piece so the license plate could be moved off the lid and into the bumper.

There’s no mention of chassis mods in the story, but the car certainly looks like it sits lower than factory height. The wheel-and-tire package is simple: wide whites on chrome reverse wheels with “baldy” caps, as R&C described them. Underhood mods were kept to a minimum as well, as most of Curry’s effort went into chrome-plating the V-8’s accessories.

It’s inside the car where things go from mild to wild-ish. “Ed Martinez’ expert stitchmanship” sewed black leather hides into horizontal and vertical pleats, with rounded cushions to break up the patterns. That same pleated leather motif was carried into the trunk, which has “a full array of tools secured to the floor.”

Curry’s Bel Air, the R&C writers said, was “customized just enough to set it apart,” yet it was “plenty sharp for shows.” And compared to a lot of the craziness that was car customizing in the ’60s, this Chevy still looks good to this day.