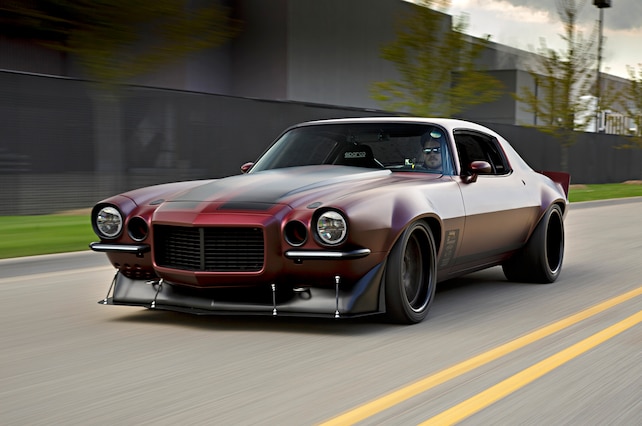 Driving across the desert from Southern California to Las Vegas takes somewhere in the neighborhood of four hours, depending on your driving habits, bladder size, and vehicle limitations. Although one could shave off a good chunk of time by making the trek behind the wheel of any number of European supercars—provided your radar detector’s software is up to date.

It’s easily one of the most boring drives there is, as once you get deep into the Mojave Desert the distant, generic-looking hills have a way of making time stand still … even at 90 mph. Regardless of the monotony, we do it every year to make our way to the largest automotive aftermarket event on earth: the SEMA Show.

Thankfully, things move at a much faster pace in and around the Las Vegas Convention Center—it’s muscle car mayhem at its best. Case in point was when we spotted a rather large crowd gathered around a killer 1971 Camaro perched inside the Holley booth. A little detective work on our part revealed that Paul VanNus and the crew at Dutchboys Hotrods in Kalamazoo, Michigan, was responsible for the attention-grabbing second-gen.

Upon initial inspection, the car divulges a somewhat raw demeanor, but a closer look reveals a remarkably refined example, from under the hood all the way through the interior, this car is uniquely special. Second-gen Camaros are becoming the go-to rides in the Pro Touring world. They are ripe for the pickin’ when it comes to engine and suspension mods, and when taken down a few inches in altitude, their appearance becomes downright ravening.

Being owners of Dutchboys Hotrods, Paul and his dad, Joe, understand early second-gen Camaros and how to get the ’tude just right. At 25, Paul isn’t an “old salty” who’s seen it all, but he’s been around his share of vintage muscle. The shop’s resume consists of quite a few cars that have been magazine darlings over the past few of years, and their client base consists of some heavy hitters in the muscle car world.

As a young buck, Paul remembers his dad always working on a project car in the garage, and going to a lot of car shows. The talented father/son duo took their passion for working on and building cars into one of the premier hot rod shops in the country.

Paul’s first build was a 1967 Chevy II as the shop’s “calling card,” but he wanted a more track-capable ride to represent the shop. He really liked the early second-gen Camaros so he set his sights on one he spotted for sale on Lateral-g.net. “It was in very bad shape,” recalls Paul. “We ended up replacing the quarter-panels, roof, firewall, floors, fenders, rear body panel, and the outer wheelhouses.”

Busy working on customer cars offered Paul limited time to work on his own project. “Since customer cars come first,” Paul explains, “I could only work on the Camaro in my spare time. I had to haul the car back and forth from home and work way more than I wanted.”

Things got real interesting when Tom Tomlinson of Holley expressed interest in having the car on display in the Holley booth for the 2015 SEMA Show. Paul recognized this as a great opportunity to promote the shop, and with only two and a half months until show time, he still accepted Tom’s invitation.

Paul, Joe, and the crew at Dutchboys were all on board and committed to making the deadline—the thrash was on. But they didn’t just stitch on aftermarket sheetmetal and call it good—nope. These guys are known for creative, custom builds so they took Paul’s vision of a ’70’s road race-style beast—complete with flared fenders; super wide rubber; and a taller, more laid-back rear spoiler, which all had to look more original than aftermarket. Done deal.

Far from factory are the custom brake-ducting air inlets where the front turn signals once resided, shaved door handles, and enormous front spoiler from D&Z Customs. The front bumper kits donned with LED lights are also from D&Z. The Carbon Kustoms carbon-fiber hood lightens the load a skosh. The rear bumper was sliced, diced, trimmed, and shaved to fit the modified rear panel. See where this it going?

The Dutchboys’ antics are extreme in their process yet the finished product conveys a less obvious shift from the original scene—at times overlooked by the average gearhead, but the extra effort sets this car apart from every other F-body out there. Even more insane is the fact that just three weeks prior to deadline, the reworked shell was still being massaged in preparation for Joe to meticulously lay down the PPG Vibrance Checkered Past pigment—a unique burgundy blend that gives off a sweet satin vibe.

Keeping in tune with today’s Pro Touring motif, LS power and a manual transmission are the car’s main motivating factors. Paul went to Livernois Motorsports (Dearborn Heights, Michigan) for 427 cubic inches of LSX LS7 goodness under the hood. The healthy mill was subjected to a 4.000-inch stroke and 4.125 bore then donned with Livernois go-fast hardware, including a 4340 crankshaft, H-beam 6.125 rods, Powerstorm 11.4:1 pistons, and LS7 Stage 2 cam. Livernois Race Series CNC-ported LSX-LS7 aluminum heads cap the ensemble held on point with ARP fasteners. An MSD AirForce intake gulps air while a set of Holley Terminator injectors atomize the fuel. Hooker headers and Hooker BlackHeart 3-inch exhaust provide an aggressive exit strategy. The Livernois effort gets ’er done with a hearty 600 hp and 540 lb-ft to the tires. That kind of horsepower will keep Paul’s tire bill constantly spinning in the red.

The aforementioned manual trans is a TREMEC T-56 six-speed, with a McLeod RST twin-disc clutch called to handle shifting duties and smooth out power sent to a C&R Racing rearend stuffed with 3.73 cogs and a Truetrac limited slip. Speedway Engineering provided the axles for the Baer Tracker floater system.

The cockpit carries a simple, high-end performance theme, including a Holley LCD display as the focal point within the 1969 Camaro dash and DSE insert. Bohde Custom Auto Interiors laid down the custom leather bits and carpet, recognizing a sporty Euro influence. Paul calls the shots from a Sparco Evo II seat and is secured by Schroth four-point harness with one hand gripping the Dutchboys custom shifter handle.

To date, Paul claims, “all the positive reaction from the SEMA show was a major highlight, but getting out to the track and really showing what this car was meant to do takes top billing.”

“Without the dedication of our great team here at Dutchboys Hotrods, the car would have never made the insanely tight deadline, nor would it have come out as nice as it did. I can’t thank them enough for all their hard work and long hours that they put into this project.”

We asked Paul what he’d do different if he had to do it all over again. Without hesitation Paul answered, “I’d make sure to have more time. The SEMA thrash was very real—like sleeping-on-the-shop-floor real!”

Camaro Resurrection: Bringing a Car Back to Life after Sitting for 20 Years

Camaro Resurrection: Bringing a Car Back to Life after Sitting for 20 Years.

This 1971 Camaro Z28 was once a bone stock survivor, now it is a showstopping restomod with a numbers-matching small-block 350.

» Read More
This second-gen 1971 Chevrolet Camaro is a track terror – check it out!

TCI has developed a complete suspension solution for the second-gen 1971 Chevrolet Camaro platform that tears up the track, yet is docile enough for the street.

This Grand Touring 1971 Camaro from GAP Racing has an LS9 heart and a daily-driver soul.

It’s been a long time coming, but Project Orange Krate, our 1971 Camaro project, makes its debut at the Boston World of Wheels!

Project Orange Krate, our 1971 Camaro, gets hood stripes to enhance the look of this killer Pro Touring muscle car.

» Read More
Here is the Coolest Camaro from SEMA 2015

The Dutch Boys-built 1971 Camaro was a major highlight at the 2015 SEMA Show.