Boosted: But not in the way you’re expecting 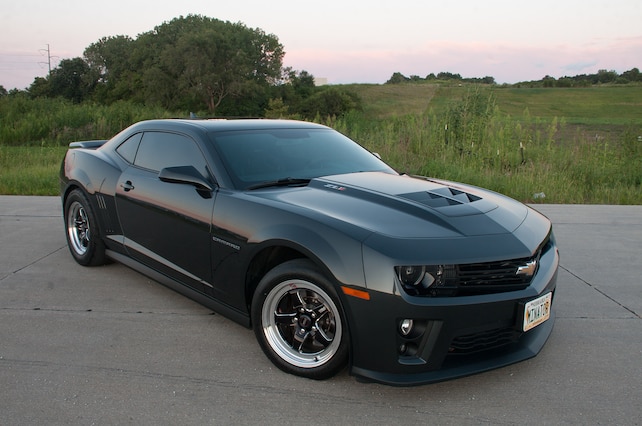 By all accounts, a 2014 Camaro ZL1 is already a badass ride but for some, like Nebraska’s Clifford Morales, it’s just not enough. From the factory the ZL1 came with a supercharger poised atop its LS engine, and while Morales was all about the boost he decided to stuff in atmosphere using a pair of turbos instead. The factory blower was tossed and in its place Clifford bolted on a custom-fabricated, aluminum Hogan intake with a billet Nick Williams 102mm electronic throttle body. Clifford then turned to Precision Turbo and Engine for a pair of their 67mm PT6766 race turbos. To this mix he added a couple of 38mm TiAL wastegates and matching 38mm blow-off valves. Turbos make heat, so to tame it a bit the turbos were wrapped in DEI blankets and the intake runs a Cry02 cooling system for the intake charge. The engine exhausts through a Stainless Works system and the conglomeration of speed parts helped the Camaro put down 707 hp at 6,200 rpm and 691 lb-ft at 4,900 rpm. All that forced air means the ZL1 needs lots of fuel. A Fore triple-pump setup with ID2000 injectors fuels the engine, which is set up to run boost-friendly E85 gas with the aid of an E-Boost electronic boost controller.

The rest of the ZL1 is stock except where it needed to be beefed up to handle the extra power output. The multipiece stock driveshaft was replaced with a Drive Shaft Shop carbon-fiber version and the stock clutch was tossed in favor of a triple-disc unit. The already capable suspension was left alone with the exception of some toe rods, trailing arms, and sway bars from BMR. When at the dragstrip the Camaro rolls on Weld RTS 17x3.5 front and 17x10 rear wheels wrapped in M&H race rubber (325/45/17 rear).

It all works together to make an already fast car scary fast and, aside from the wheels you would never know the Camaro is packing a 700hp sucker punch. As Clifford told us, “I wanted a car that could go fast straight, race on a road course, and be a daily driver.” We would say he nailed all three.

The Roadster Shop’s 2014 ZL1 Camaro was customized for the 2014 SEMA Show. Lots of carbon fiber, more power, and an upgraded suspension make this Camaro better than ever.

Which car is best? We’ll let you decide. Camaro Z/28 vs. Corvette Z06 vs. Callaway Stingray vs. Supercharged 1LE .

Don't miss out on this special Championship Edition of Straight Line Spotlight where we highlight the baddest drag racing Chevys, like Bogacki's 1963 Corvette!

Redline Motorsports ups the ante on a 2014 Camaro Z/28 with a cam, headers, and custom tune. Follow along on the install as we pick up a few more ponies!