Blue Rush: Fate brought Jarrod Jacobs to his wicked Fifth-gen; hard work brought it to the pages of Camaro Now 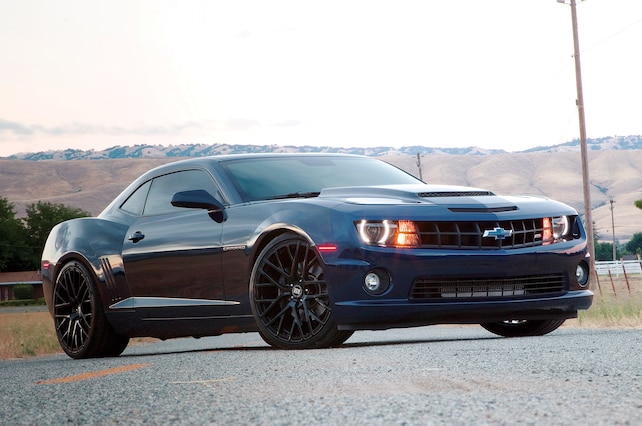 Life has a funny way of turning the most innocent of endeavors into history-changing events. A first date that turns into a marriage, a curiosity that turns a hobby into a career, a search for a picture of a ’69 Camaro that ends up with your car being featured in a magazine—whatever it is, these things always seem to start out of nothing, building until you look back and realize what has become. For Jarrod Jacobs, the story of his awesome Imperial Blue Metallic 2010 Camaro actually began even before his quick search for a photo of a ’69 Camaro on the Internet—it began at birth. “I was born into a family of car people. My mother and father both worked in the car industry for 30-plus years each. My father sat me on his lap at 3 years old and let me steer a full 3 miles to our house in the backroads of Clayton, California.” (Try that nowadays and see what happens!) “He taught me how to drive a manual transmission at age 10. I’ve been parking cars in San Francisco since I was 16 and I’ve been driving on public roads since the first day I was legally allowed to have my permit. I’ve always had a list of cars I want to own for the longest time and a first-generation Camaro (’69 RS/SS) topped that list.”

And somehow, that ’69 RS/SS waited in the shadows, stuck in Jarrod’s head until 2007, when he wanted to show a friend of his what a ’69 Camaro looked like. While searching for images, “I happened upon a few pictures of the new (at the time) Camaro concept.” Intrigued, Jarrod started to dig deeper, finding the source of the pictures on a fledgling startup forum called Camaro5. “I joined up and began to converse with the small, tight-knit community there. I knew the Camaro was going to be my next car and I started saving for it that week.” After months of research, Jarrod had set his mind on a convertible Camaro, but a long wait combined with several design features that Jarrod didn’t agree with changed his mind and he set out to find the new Camaro of his dreams, one that he could modify to make his own and stand out from the crowd.

After an extensive search to find a dealer willing to work with him on pricing, Jarrod finally placed his order in the middle of January 2010. A couple of days later, Jarrod saw his order change from 2,500 to 3,000, showing him that his order had been accepted and his Camaro was being built. “The only two choices for me for a hardtop Camaro were Imperial Blue Metallic or Cyber Grey Metallic.” Obviously, Jarrod finally chose IBM, a color that was both “brilliant, sparkling royal blue” and “almost black” depending on the lighting. In the beginning of February, Jarrod received an update that his Camaro may be available even sooner than anticipated, so without the car even in his possession, he began ordering parts.

His first call was to Seibon, one of the world’s premier carbon-fiber manufacturers, to order a carbon trunk lid, which added an aggressive ducktail spoiler to the rear of the Camaro, a look Jarrod preferred “since it was all one piece, it creates a seamless line for better aerodynamics and a much better look than that of three pieces where you see gaps.”

Matching the trunk, Jarrod called RK Sport next, ordering a Ram Air–style hood, which raised the cowl slightly and added an additional, functioning “mail slot” to provide additional cooling and airflow. Once he finally had his Camaro in hand, Jarrod dropped the pieces in place and went straight to the paint shop, where they applied several coats of matching IBM along a slick carbon-fiber and faded black outline, a touch Jarrod regards as one of his favorite secrets about the car, as it takes onlookers two or three viewings to notice that there is exposed carbon on both the trunk and hood. “Whenever someone comes up and notices, it puts a smile on my face,” he says.

Naturally, Jarrod wasn’t only focused on looks; he wanted to have the power and drivetrain to back it up. Suspending the body, Jarrod outfitted his 2010 with a set of Pedders xA coilovers, which are hooked to a pair of LSR Performance three-way-adjustable sway bars. “Before I even got the car, I knew I wanted to road race it. A couple friends of mine who had multiple setups between them let me drive each one back to back to get a feel for the difference. I noticed the coilovers were a night and day difference over drop springs,” he tells us. It’s nice to have friends, especially ones that will let you test their modifications before you buy!

Along with the new dampers, Jarrod needed a set of wheels and tires, a decision made easy by the crew over at USW Forged, who built Jarrod a set of 22-inch monoblock “ZR1-esque” wheels, called the Protos, which turned out to be only one of two sets ever produced. Wrapping around those 22-inch hoops are a set of Pirelli PZero Nero tires, which have the unfortunate task of harnessing the supercharged LS3’s horsepower and torque.

Under the carbon-fiber hood, Jarrod is rocking a ProCharger P-1SC head unit and a pair of Stainless Works long-tube headers, which breathe through a custom 1-of-1, 3-inch Flowmaster Hushpower exhaust that Jarrod had built in collaboration with Flowmaster and Blu808, a company know for killer fabrication and one of the meanest drift Camaros in existence. Out of the box, with some tuning work from Michael Moore (no, not that Michael Moore!), Blue Rush laid down 548 rwhp and 494 lb-ft of torque, which was more than enough for Jarrod to handle on the street, strip, and road course. “You can easily feel it getting close to the edge and it’s quite exhilarating to be able to feel the rear end just slightly start to push as you play with the throttle,” Jarrod says.

Like we said, it’s funny how little things can add up to something big. Funny how a web search can lead to a forum full of new friends, a phone call to a relationship with a major vendor, and a trip to a car show into a feature in Camaro Now. You just never know what’s around the corner, unless of course you’re Jarrod Jacobs, where you can be sure the next corner is just a throttle blip and some power oversteer away.