One Year Deal: James Newsome’s aqua blue metallic 2010 Camaro has cold air induction under the hood—and In Its DNA 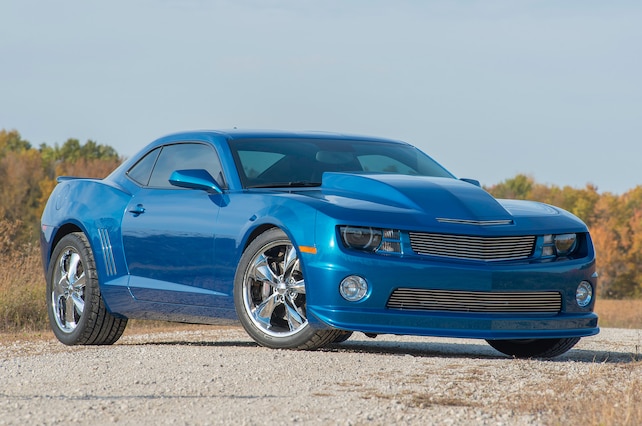 It’s a challenge for any automotive performance parts manufacturer to determine the right time to build a promotional project car that accurately reflects the business and its manufacturing capability. But, the decision for Cold Air Inductions’ James Newsome was an easy one. Newsome had a hankering to own the single-year paint-code Aqua Blue Metallic 2010 Camaro you see here; the Michigan resident searched all over the country to find a clean car with this one-year-only hue covering its flanks.

“In 2012, I set out to find a stock 2SS RS Aqua Blue Metallic Camaro, which was only produced in 2010, which made my search difficult. At the time, I could only find two cars for sale—one in Wisconsin and one in Arizona. I ended up purchasing the car from Arizona and had it shipped here to Michigan. When it arrived, the car was mostly stock with 16,080 miles, tinted windows, and a set of 20-inch Foose Legend wheels,” says Newsome.

A Hurst short-throw shifter, a Borla Atak exhaust system, and a few dress-up items were also installed, but the driveline was as stock as could be—providing a great foundation for Newsome’s ultimate plan to use the car as a promotional tool for the business.

Of course, the first modification performed to the car was one of his company’s Textured Black cold-air induction systems, designed to provide a horsepower boost and an extra bit of kick when the hood is lifted. The company uses a unique design, with the inlet tube constructed from TIG-welded, powdercoated aluminum with an internal thermal coating. They take the extra step of insulating the inside of the airbox to help reduce heat soak, then cap the system off with a slick Plexiglas filter inspection window.

At this point, the car left its new Michigan home to take the long trek to nearly the bottom of the Florida peninsula, to Eric Peters and the crew at Motorsports Performance Design (better known as MPD1) where the exterior modifications that give the car its menacing countenance took place.

Peters installed a host of his company’s products: a cowl-induction hood, “Smoothie” rear exhaust panel, front spoiler, and rear spoiler, all coated in Aqua Blue Metallic. Peters also tied in the subtle ghost rally stripes and finished off the nose of the car with a heritage grille with a custom three-piece set of Rick Bottom Motorsports-designed Carriage Works grilles.

“The hood looks so mean and gives the car such an aggressive look. The curve near the windshield matches the curvature of the glass, so the lines are clean and the design just looks right when installed, almost like it should have come from the factory with it,” says Newsome.

A near-disaster occurred when the rear wing that was on the car when it was received was removed, as the previous owner was most definitely not a hot-rodder … or anything of the sort.

“Fortunately the silicone and double-sided tape holding the ends on cleaned off and we were able to sand and buff the paint so no trace was found from this spoiler’s footprint,” Newsome explains.

At the time, MPD1 was still developing the front spoiler and used this car as the mockup vehicle to test its fitment and finish, along with finalizing the design. Other subtle modifications were performed to the nose to give it the unique look seen here.

Once the exterior modifications were completed, the car was shipped north to Michigan again, where Newsome and his crew set the car’s stance with a set of Eibach lowering springs, then installed a set of Lakewood drag struts up front.

Now that the car’s appearance was worthy of a healthy power injection, that’s the direction Newsome turned next. The 6.2-liter LS3 engine was machined by St. Clair Engines in Richmond, Michigan, then assembled by Larry Barylski.

The stock crankshaft and connecting rods were reused, as these items have proven durable in the LS3 application. A set of Chevy Performance Parts’ LSX pistons were slid into the bores to set the compression ratio at 9.0:1, and the engine was topped with a set of CPP CNC-ported LS3 cylinder heads to improve airflow.

One of Jannetty Racing’s Rough Idle Blower Cams was picked out; specs measure 0.610-inch lift on the intake side and 0.623-inch on the exhaust side, with duration checking in at 223/239 degrees at 0.050-inch lift.

Why a blower cam, you ask? Because the quickest way from A to B is with some sort of forced induction, and for this machine one of SLP’s TVS2300 hybrid Roots-style superchargers was chosen to be placed on top of the engine. Of course, Newsome selected one of Cold Air Inductions’ cold-air kits to finish off the induction side and provide cool, clean air to the supercharger system.

Supporting gear for the supercharger system includes one of ATI Racing’s 5-percent overdrive crankshaft pulleys, a Super Tensioner from JRE to keep the belt in line under power, and one of Lingenfelter’s Twin Pump fuel pump packages to ensure there’s enough fuel under boosted conditions.

The exhaust was opened up with a set of Kooks 1 7/8-inch long-tube headers, which feed into the aforementioned Borla Atak system, creating a rowdy exhaust note capable of drawing attention quickly.

The base tune was handled by Ted Jannetty of JRE remotely, and Newsome subsequently dialed it in on Cold Air Inductions’ in-house chassis dyno. With the revised calibration uploaded to the processor, the car pumps out 635 horsepower at 6,000 rpm and 646 lb-ft of torque at 4,500 rpm; stout numbers made more impressive by their place in the lower ranges of the tachometer where the power is supremely usable on the street.

A full set of Mickey Thompson Street Comp tires gets the power to the pavement, measuring 245/45/20 in the front and 305/35/20 in the rear. Other driveline modifications are limited to a Chevy Performance Parts LS9 clutch.

The accelerated six-month build process wasn’t for the faint of heart, but Newsome and his assembled crew of craftsmen pulled it off.

So how do you know whether your project was a success? By taking it to the Detroit Autorama show—one of the largest, most insane custom car shows in all the land—and bringing home the first place trophy for your class, which is exactly what Newsome was able to do last March.