Money, connections, and an unlikely hero conspire to transform a Tri-Five that no one wanted into a big-block-powered Pro Touring masterpiece - Castaway 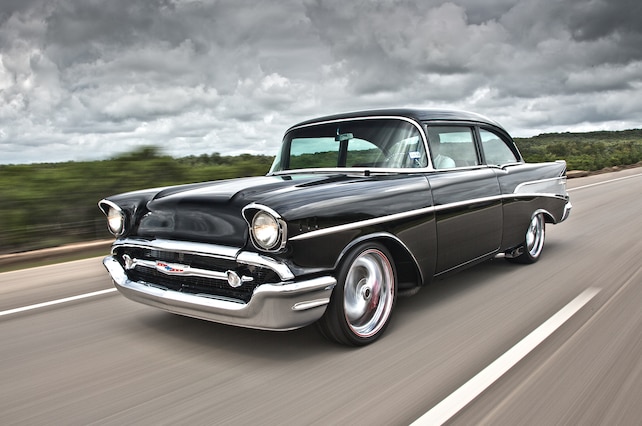 Haters gonna hate. No one likes seeing rich dudes hook up with hot blondes half their age unless they happen to be that rich dude. Scoring stacked ladies is one of the best perks that come with having a big stack of greenbacks, but the connections aren’t too bad, either. Rich dudes know a thing or two about networking, and they tend to hang out with other rich dudes that know a thing or two about networking. Take Gene Voss, for example. When his Tri-Five restoration project hit a roadblock, he called up a buddy who happened to own a Harley-Davidson dealership. It seems an unlikely source for help, but coincidentally, his buddy had an employee that’s built a car or two in his day. We don’t know what kind of deal the two worked out, but 15 months later Gene had himself the baddest 1957 Chevy ever built at a Harley-Davidson dealership.

The talented employee in question is Rudy Trevino. He’s been building hot rods ever since he turned 13, and he can’t remember how many cars he’s owned over the years. For decades, he’s been building cars for friends and acquaintances out of his garage, and he was even entrusted with restoring Jungle Jim Liberman’s 1970 Camaro Funny Car a few years back. Rudy’s personal ride is a nostalgia Top Fuel dragster covered in a 1966 Nova body so he’s no stranger to fast Chevys. Nevertheless, he had no interest whatsoever in working on Gene’s Tri-Five. “The shop that originally worked on the car messed it up so badly that Gene needed to find someone else to fix it. Since my boss is friends with Gene, he wanted me to fix it,” he snickers.

Once Rudy saw the car in person, he was even less impressed. The disheveled Tri-Five had no fenders, trunk, glass, or interior. Worse yet, the frame was full of holes and the engine was hitting the firewall and steering rack. “Gene dragged the car out to the shop one day and said he was going to drop it off so I could look at it. I told him, ‘Man, this thing is junk,’” Rudy recalls. “I made it clear that I didn’t want to work on it, but he insisted that I take a closer look. After he left, I called Gene up and told him to come take the car back, but he never showed up. I just kind of got stuck with it.”

After the initial shock of the monumental task at hand subsided, Rudy laid out a game plan to get the Tri-Five back on the road. Literally starting from the ground up, Rudy picked up a brand-new Corvette Correction frame complete with C4 Corvette front and rear suspension. In addition to upping the ride and handling ante big time, the new frame properly positioned the engine and fixed the interference issues. To maximize the grip potential of the Tri-Five’s new high-tech suspension, Foose 20-inch rollers wrapped in BFGoodrich g-Force rubber provide plenty of stick. Taking advantage of the extra real estate are Wilwood six-piston calipers clamping down on massive 14-inch rotors.

Granted, the big-block’s prior placement within the chassis may have been all wrong but there was nothing wrong with the engine itself. Not by a long shot. The crate Shafiroff 540 is based on a 4.500-inch-bore Dart Big M block fitted with a Scat steel crank, H-beam rods, and JE 10.5:1 forged pistons. The air supply comes courtesy of Dart 325cc aluminum heads, an Edelbrock Victor intake manifold, and a Holley 850-cfm carburetor. A COMP solid-roller camshaft manages the valve events while the exhaust exits through Hooker headers and a dual 3-inch exhaust system with DynoMax mufflers that Rudy built himself. The 715-horsepower Rat is plenty stout in its own right, but when matched with a 700-R4 overdrive and its deep 3.06:1 First gear, glorious smokefests are only a foot-twitch away.

With the Tri-Five’s chassis and running gear addressed, Rudy began piecing the body back together. Interestingly, the car’s prior builder decided to paint the body panels before test-fitting them, which inevitably led to scuffs and scratches during the test-fit process. Consequently, Rudy repainted the hood and fenders before buttoning everything back up. At this stage of the build, the Tri-Five started looking much better than anyone anticipated. Since a stock interior just wouldn’t feel right anymore, Rudy went all out. The front and rear bucket seats, center console, door panels, carpet, trunk, and headliner are all custom. A Vintage Air A/C system, Pioneer stereo, Classis Instrument gauges, Billet Specialties steering wheel, and power everything ensure that the Tri-Five’s cabin is every bit as modern as the powertrain and chassis. Finally, thanks to an unlikely hero, the once-hopeless Tri-Five was finally complete.

In some respects, the tale of Gene’s 1957 Chevy is yet another example of why being rich doesn’t suck. The common man can only dream of having a buddy with a Harley dealer that just happens to employ a man of many talents such as Rudy. Like we said, money and connections go a long way. On the other hand, perhaps Rudy’s the one that’s getting the last laugh. At some point during the 15 months that it took to fix the Tri-Five, Gene moved from Texas to Florida. That means that for the past six months, Rudy has had free rein to cruise around town in a badass hot rod and melt tires that he doesn’t have to pay for.

Score one for the common man.