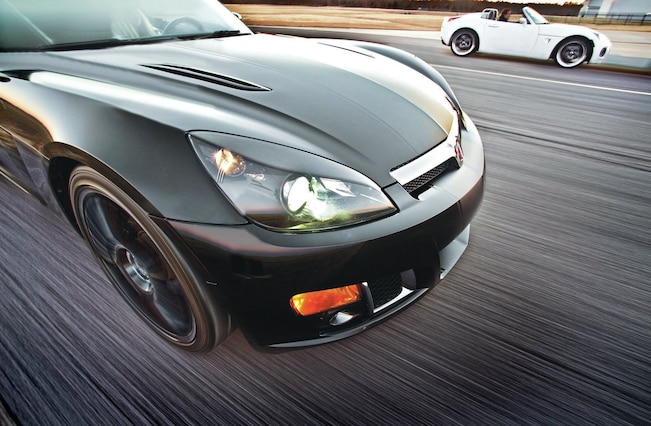 Drool over the specs, fellas. Eight cylinders of GM goodness? Check. Variable valve timing? Roger that. Gasoline direct injection? Affirmative. A pair of turbos huffing out 800 rear-wheel horsepower? Hell yes! What sounds like a pimped-out, Gen-V small-block is anything but. That’s because the combo at hand features four cams, 32 valves, and just 244 cubic inches distributed amongst—here’s the real kicker—two separate engine blocks. We’re talking about the 2.0L Ecotec inline-fours packed inside the Kappa convertibles driven by Nikki Littrell and Tyler Robles. She drives the Saturn Sky. He drives the Pontiac Solstice. And while neither are cars typically embraced by the late-model GM faithful, these fraternal Kappa twins prove that stomping Mustangs is twice as fun when you do it with half the cylinders.

The hot rodding hobby is often credited with bringing people together, and that’s certainly the case for Tyler and Nikki. As a kid that grew up riding dirt bikes and sport bikes, Tyler always had a passion for speed. Shortly after finishing high school, he wanted a potent yet compact, rear-drive car to replace his lumbering ‘02 Silverado. This led to an unexpected turn of events that steered him down the Kappa path. “I went to the dealership to look at a Chrysler Crossfire, but it had already been sold,” Tyler recalls. “The salesman begged me to come around the back to look at an ‘07 Pontiac Solstice [GXP] that had just come in. The car was dirty and hadn’t even been cleaned up yet, but I fell in love with it right away and bought it on the spot.”

Initially, Tyler kept things simple by installing an AEM cold-air induction kit, a Solo Performance exhaust system, and a custom PCM tune. To further enhance the car’s cornering prowess, he upgraded the chassis with Bilstein lowering springs and 20-inch Enkei LS5 wheels wrapped in Nitto rubber. The white-hot Solstice caught the eye of a certain co-worker named Nikki, who just happened to be in the market for a new car. “I’ve always had an interest in fast cars. I put 275,000 miles on my ‘96 Firebird and drove it until it fell apart at the seams,” she reminisces. “I didn’t talk to Tyler much until I started looking for a Saturn Sky. As we began spending more time together I fell in love with these cars, and then I fell in love with Tyler. After months of searching, I found a low-mileage ‘09 Sky with a manual transmission in Alabama, hopped on a plane, and drove it back home to Texas.”

Once the happy couple each had a Kappa convertible of their own, things started getting interesting. Tyler introduced Nikki to engine tuner, John Hansen, who was in the midst of swapping an LSA small-block out of a CTS-V into his Kappa. Although Nikki was tempted to buy the upgraded turbo kit off John’s car—which included a Werks tubular header, a larger Borg Warner 54mm turbo, a custom cold-air induction system, a ported throttle-body, a high-flow cat, and custom intercooler piping—she decided to pass on it. “I thought I’d hold off on making major modifications until the warranty expired, but then one day Tyler surprised me by buying the turbo kit for me as a present,” Nikki recalls. “Tyler and I installed the kit ourselves over a week’s time, and we painstakingly polished the valve cover and coil cover. The car was then conservatively tuned to 400 rear-wheel hp with HP Tuners by John Hansen.”

Unfortunately for Tyler, being a good boyfriend meant he shot himself in the foot, and his Solstice was now playing catch-up. Predictably, that didn’t sit well with his male ego. “I was happy with my car for a while, but I knew that if I didn’t get back to [modifying], Nikki would have a faster car than me. Since I am so competitive, and since we had just started dating, there was no way I could let her beat me in a race,” Tyler explains. “At first I decided to run a combination of nitrous and methanol injection, but I wasn’t completely satisfied with how it performed. I pulled it all off and decided to install a larger Hahn S20G turbo instead. Neither Nikki nor I had swapped a turbo before, so between taking our time to do it right and running around looking for fittings, it took about a week to swap it out. After we got the car running, the clutch started slipping as soon as the boost hit 10 psi, so we spent another week on our backs upgrading to a Spec clutch. This car has been a huge pain to work on, and nothing has been straight forward, but in the end it has all been worth it.”

Ultimately, the tweaks performed on both cars have nearly doubled the factory hp rating of 260, which is pretty darn impressive considering that their stock inline-fours measure just 122 cubic inches. Furthermore, the Ecotecs in both cars are 100-percent stock from their valve covers to their oil pans. Making do with tiny displacement requires technical creativity, and gasoline direct injection allows running between 24-26 psi. of boost safely on a 50/50 blend of E85 and 93-octane pump gas. Unfortunately, as the LT1 (Gen-V) crowd has recently discovered, mega-pressure direct injection fuel systems can be a bear to tune. Since Kappa enthusiasts have been dealing with this issue since 2007, they’ve devised a simple yet ingenious workaround. “Direct injection operates at such high fuel pressure that the stock fuel pump can only support an additional 50 hp,” Nikki explains. “John Hansen has come up with a solution to the problem by adding a fifth fuel injector positioned in front of the throttle-body that taps into the factory fuel rail. The injector is managed by a methanol injection control unit.”

Granted that squeezing big power out of a wee little motor is a mighty impressive feat, both Tyler and Nikki admit that they’re at the limit of what their Ecotecs can handle. Not surprisingly, the duo has already schemed up the perfect workaround. “The pistons are the weak links in these motors, and not many companies make upgraded internal components for them. My plan is to swap in a single-turbo LS small-block and a T56 trans,” says Tyler. Not to be outdone, Nikki’s got some extreme plans of her own. “In the near future, I want to install a bigger turbo and nitrous, but eventually I’d love to swap a supercharged LSA into my car. My end goal is 700 rear-wheel hp,” she reveals.

In the meantime, the happy couple thoroughly enjoys representing turbocharged four-cylinders on the street. “It’s hard not to race people. These aren’t cars you see at every corner, and they surprise almost everyone who sees how well they run,” says Tyler. Inevitably, Tyler and Nikki go head to head every now and then, and both agree that while the Sky has the slight advantage off the line due to its quicker spool-up time, the Solstice manages to edge it out by the slimmest of margins on a long run. Nevertheless, don’t think for a second that the woman in the relationship is the one benefitting from the dude’s knowledge. The healthy exchange of ideas and information goes both ways, and it not for Nikki’s moral support, this story could have very well been about one Kappa car instead of two. Says Tyler, “I really have to thank Nikki because if it wasn’t for her, I probably would have burned my car to the ground out of frustration.” Thank goodness he didn’t, and thank goodness for hot rodding diversity, cylinder count be damned.

Everything You Need to Know About NASCAR Ahead of the Daytona 500 » Read More
18 Classic Chevys Put To The Test! – 2019 Super Chevy Muscle Car Challenge Presented By Falken Tires.

1957 Corvette convertible turned into a roadster with modern chassis and power.