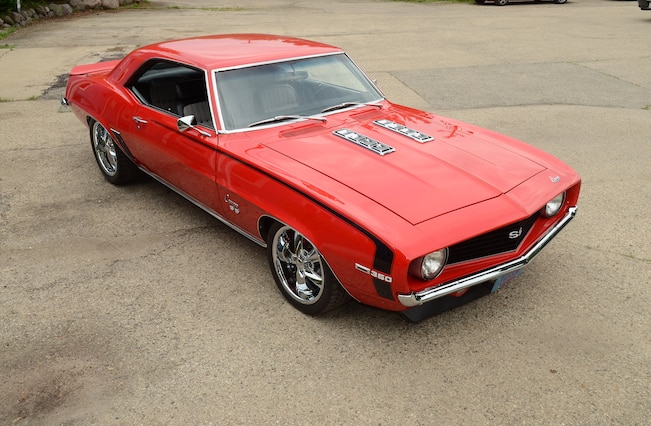 Carl Schultz had a ’69 Camaro. It was a clean, very straight, older restoration with a classic drivetrain that was in need of new power and suspension. With dreams of a more modern and efficient muscle car, Carl met with Norm Brandes and Jim Daley from Westech Automotive (Silver Lake, Wisconsin) at the 2012 Performance Racing Industry show in Orlando, Florida. Shortly thereafter, a complete Camaro, ready for performance upgrades showed up at their shop.

After serious discussions among the three of them about potential forms of LS engine transplants, Carl, owner of Five Star Race Car Bodies, settled on a new GM Performance LSX 454 engine cranking out over 620 horsepower. To that total, Westech Automotive added a FAST LS intake with Big Mouth fuel injection inlet to build upon that impressive power.

The original plans called for a 200-4R automatic transmission to replace the apparent factory TH350 currently in the car. A total redirection to a Tremec TKO 600 five-speed was made after it was determined that the original fitment was a four-speed manual transmission. To ensure positive tire engagement, a heavy-duty clutch and strong/lightweight driveshaft were installed to control the massive horsepower and torque.

To increase the driveability, they engineered a throttle-by-cable fuel injection system over the throttle-by-wire controls more commonly found with this engine. The spark plug coil packs were mounted by the oil pan to keep all wiring out of view, and the plumbing was contained with stainless steel tubing, making for a super clean engine compartment.

But it was clear to both Norm and Jim, along with Carl, that the car had to stop and handle as good as a new Camaro. Happy with the modifications made to modernize the power and throttle response, they turned to the suspension.

To get the right handling and chassis strength, they called on Heidts Hot Rods and Muscle Cars to achieve those key features. In the rear they installed a Heidts four-link suspension, 2 inches narrower than stock to accommodate the increased-width wheels and tires they had planned.

Finishing off the Camaro, Norm and Jim attended to some of the spots needing touch-up, but for the most part left the original Camaro Red exterior as it arrived. To that they added SS-style graphics and the original “350” cid engine emblems to fool the competition as to the stout power under hood (454 emblems are due to arrive soon). The result is a car that checks all the boxes with regards to modern Camaro performance, just wrapped in one of the best Camaro shapes ever to leave a GM assembly line.

Speedway Motors brought a ground-pounding, 1,400hp Camaro to the 2018 Super Chevy Muscle Car Challenge presented by Falken Tires. Here’s how it did.

» Read More
Classic Car Studio’s latest project is shaping up to be a hell of a ride!

Highly Modified from Bumper to Bumper, this ‘69 Camaro is being crafted over at Classic Car Studios, home of Speed Is The New Black!

Check out this immaculate Pro Touring 1969 Camaro armed with an LS3 engine and top-notch aftermarket suspension.

Enlisting the experts and allowing them the freedom to create a masterpiece provides this end result: Craig Hardee's stunning LS7-powered ’69 Camaro.

Rick Hendrick takes a stab at the Pro Touring route with this stout LS9-powered 1969 Camaro.

How to install an Aeromotive fuel tank system with built-in electric pump in a 1969 Chevy Camaro. A corroded and outdated fuel tank causes problems for Chevy's.