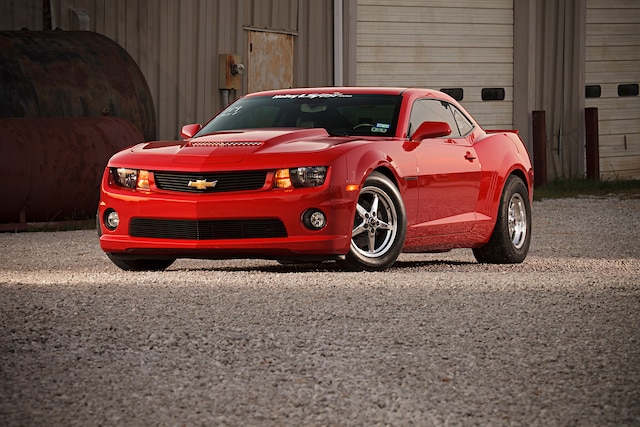 Writing and photographing Camaros from all over the country puts us in the company of car guys (and gals) of varying degrees—from "hardly" to "hardcore." We come across those who are slightly infected with the "car bug" and others who are not only bitten by it, but happily self-inject the virus. Take, for example, James Stacy, owner of this gorgeous Victory Red '11 2SS. On our car feature questionnaire we ask for a list of the car's technical information along with a bit of personal info so we'll have a little bit of the owner's background and his relationship with his ride while writing the feature. In the section where it asks for spouse's name, James wrote "Small Town Automotive." Right then I realized James is not your average auto shop owner. Here's a guy who recognizes (and accepts) his addiction to cars. Running his auto business and racing cars are top priority for this 42-year-old hot rodder from Fort Worth, Texas.

James is a drag racer at heart, and as to why the fifth-gen Camaro is his platform of choice, James responded: "GM put all the pieces back out there for me to build the car I've wanted for a long time. They brought back the old-school look with new-school horsepower."

Being an auto shop owner, James has the ultimate set of tools (Fast Times at Ridgemont High movie reference), not to mention the experience and know-how to make his fifth-gen fly. He started with the stock 6.2L (378ci) L99 and bored it to 4.07 inches and stroked it to 4.00 inches, bringing the mill up to 6.8 L (416 ci) of LS goodness. The stock L99 heads fit the program and are accompanied by COMP pushrods and Mahle 11.2:1-compression pistons. Eagle H-beam connecting rods and a 4340 crankshaft round out the rotating assembly. A Bullet custom camshaft (0.613/0.623 lift and 227/246 duration) puts the rpm sweet spot right on target. The GM LS3 intake and fuel pump suffice for the moment. And on occasion James cuts loose a 125-shot of juice via a Nitrous Express plate system.

Spent fuel travels through a pair of 1 7⁄8-inch polished stainless headers, a 3-inch X-pipe exhaust system, and mufflers; all from XS Power. The system promotes a hostile growl that fits the car's scrappy personality.

James' plan for bumping up the power was a simple one, and the one he's sticking with for now. At this stage, 535 hp and 609 lb-ft of torque are numbers still in the safety zone of running the stock fuel delivery system … barely.

An FTI 3,600-stall converter slaps the Circle D Transmission-upgraded 6L80E in motion for snappier launches off the line. James pushed the issue and replaced the less-than-perky 3.27 gears with a set of 3.91 cogs.

Rolling on drag radials, the Camaro has rewarded James with a best quarter-mile e.t. of 11.35 at 118 mph on the motor alone and a 10.39 at 129 mph on a 125-shot of juice. That's earning some Texas-sized street cred when you consider the weight of a stock fifth-gen 2SS. But James doesn't take all the glory; he gives props to Mike at More Power Tuning (Longwood, Florida) for dialing in the tune to make it all happen as fast as it does.

Keeping the simple theme in check, 1-inch lowering springs on all four corners is the only suspension mod performed. Braking duties were handed over to binders ripped off a V-6 fifth-gen featuring 12-inch rotors up front and 11-inchers out back. Why V-6 parts? We'll get to that reasoning in a second.

Race Star 17x4.5 wheels reside up front and cozy up to a pair of M&H Racemaster 4.5/28-17 rubber, while 15x10 Race Stars wrapped in 295/55-15 Mickey Thompson drag radials do diligence out back. This is where the V-6 brakes come in. "I had to use the V-6 Camaro brakes and slightly modify the lower control arms in order to bolt up 15-inch wheels out back—a size that everyone told me wouldn't fit," said James. "This was the only way I'd be able to run the wheel and tire combo I preferred. I just like the old-school look of running the smaller wheel with a lot of rubber. It also keeps my car from looking like all the other fifth-gens out there."

Scouring the interior, the only aftermarket piece to be found is an AEM air/fuel ratio gauge nestled in the driver-side A-pillar. And that's probably a good idea since the stock fuel system becomes increasingly taxed as horsepower increases.

Although the exterior proudly sports a slathering of factory GM Victory Red pigment, Mohr Restorations in North Richland Hills, Texas, prepped and color-matched the fully functional ram-air Phastek hood to the stock body panels. Not much love for the stock grille, James added some flair by incorporating a Heritage grille to give the car a little more eye appeal. That blade rear spoiler came from Hendrick Chevrolet in Cary, North Carolina.

Being at the helm of a project that's well into the 3-year mark, James looks forward to continuing the upgrades as time and money permit. And at this point, he's proud of the car's performance and appearance. Being able to run 15-inch wheels out back is high on his list of achievements. They offer a cool stance and an aggressive vibe not found on the vast majority of fifth-gens on the road today. He's also proud of winning the Street 7.0 index class at North Star Dragway in Denton, Texas.

Sometimes it's the subtle touches that set one car apart from another. Whether it's the wheels, tires, or stainless mesh behind a hoodscoop. Every car guy has their own interpretation of cool, and James Stacy thought a little bit out of the box when he built a fifth-gen with a style all its own. Just don't be the next guy to tell James something won't fit or can't be done on his car. He'll take the challenge and prove you wrong. And nobody likes to be wrong.

Every car guy has their own interpretation of cool, and James Stacy thought a little bit out of the box when he built a fifth-gen with a style all its own.

Take a look back at some of the fastest fifth-gen Camaros from the 2nd annual Chevrolet Performance Parts LSX Challenge Series!

To find out what goes into each of LMR’s fifth-gen Camaro performance packages, we took a trip down to the shop to check them out up close.

Stitchcraft turned a behind-schedule SEMA Camaro convertible into a timeless masterpiece. To have an OEM give you a project vehicle sounds pretty cool, right?

We take a close look at performance upgrades for the Camaro V-6 engine, from basic bolt-ons to computer tuning. If you think you need an LS3, think again!