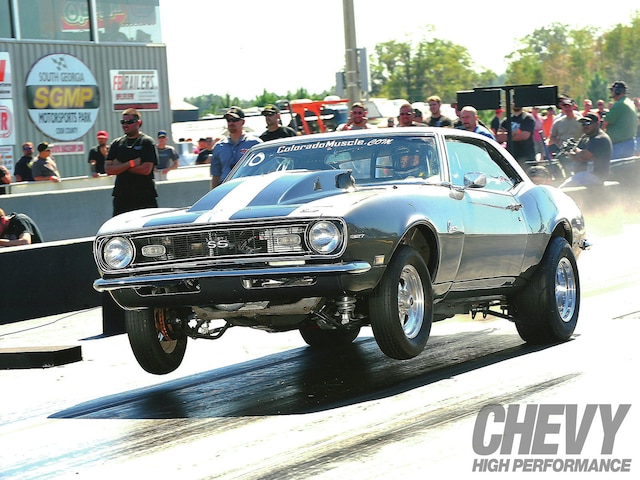 David Brady is a Camaro guy by heart and has owned three so far, including the '98 shown here. His list of engine hop-ups include an SLP cold-air system, MSD wires, and a pair of long-tube headers, all of which has helped him run a solid 13.2 in the quarter-mile. David's also an avid autocrosser and stepped up big with his choice of suspension, featuring a complete set of Strano springs, single-adjustable Koni shocks, a UMI adjustable Panhard bar, a BMR shock tower brace, along with the bigger 1LE front sway bar, and the larger 21mm rear sway bar—both with polyurethane bushings. On the autocross, his rollers of choice are the factory SS wheels that are shrouded with R compound Kumho tires and switches to a set of Borbet wheels on the street.

Bill Evans' '63 Nova has a host of body mods, including the shaved door handles, driprails, trim, and smoothed gas tank filler. But, it isn't just about looks; Bill's Chevy II runs high 10s with a 1.58 short-time on Mickey Thompson 235/60 drag radials. Propelling the ride is a built 356ci small-block with a complete Brodix top end; out back is a 12-bolt with 4.10:1 cogs.

Originally purchased back in 1996, Mike Mularoni handled the entire build with the exception of the paint. Mike went on to tell us, "It has a 540 Merlin big-block and a TCI Automotive TH400 with a manual valvebody. The rearend is a Ford 9-inch with 4.11:1 gears." He's been driving it for the past three years and plans to see what it'll run at the dragstrip soon. Keep us posted, Mike!

We dig wheelies, especially when they are on drag radials. Check out Cory and Hilary Wilson's wheel-hanging '68 Camaro. The outer shine is Toyota Silver with custom purple stripes. Powering the first-gen is a fuel-injected 496ci big-block with a ProCharger F2 supercharger; his transmission of choice is a TH400 that transfers the power to the modified 12-bolt rearend.

With some help from Comp Cams, Manley, Tune Time, Thunder Racing, and MCP, we take this LS1 and bring it to the forefront of greatness, without destroying finances. - GM High-Tech Performance Magazine

R.P.M. Motorsports builds two Camaros that are as similar as they are different-one a 9-second SS nitrous car, the other a single-turbo Z28 rocket. - GM High-Tech Performance Magazine

Check out this 1998 Chevrolet Camaro that has a 408-ci LS engine. Read more only at www.gmhightechperformance.com, the official website for GM High-Tech Performance Magazine!

Check this April 2011 Readers' Rides! Featured this month is a 1998 Chevy Camaro, a 2010 SS Camaro, a 1981 Camaro, a 1967 Camaro and many others! Check them all out inside this month's issue of Camaro Performers Magazine!

Check out this 1998 Chevrolet Camaro that runs a 9.26 at 146.87mph! Read more only at www.gmhightechperformance.com, the official website for GM High-Tech Performance Magazine!