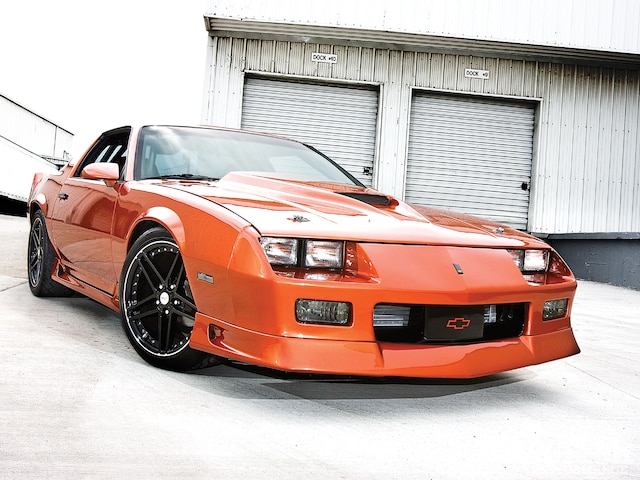 With all due respect to the Bumblebee Camaro of action movie fame, the transformer you see here is a bit more exciting than a car that turns into a robot. Of course this car didn't undergo this transformation in a few seconds, nor did it make that cool, "ER, ER, ER," sound you heard at the movies. But with more than 800 horsepower reaching the rear wheels, this 1992 Camaro will blow the doors off of any brand new, Autobot-inspired fifth-gen sitting at your local Chevy dealer.

Landen Richey's Camaro started its life as a red T-top, 305ci TBI automatic. Now it is an orange twin-turbo hardtop with an LQ4, a six-speed manual, fourth-gen dash and center console. The car has had a carbureted 355 small-block backed by an LT1-style six-speed; an LS1 with a T-56; two different turbo setups for the LS1 (as the mechanicals of the car migrated from the original body to a new one); and finally the iron-block twin-turbo build you see today. If you're keeping track, that's four engines, three transmissions, three turbos, and two bodies.

In its current iteration, Richey's Camaro is one of the cleanest third-gen builds you'll ever see. This is even more remarkable because Richey is a self-taught mechanic who planned and performed most of the work himself. Richey purchased the Camaro in 2001, when he was 16 years old. At the time he was pretty impressed with the power of the 305 TBI, as were his high school buddies. He threw a 10-inch subwoofer in the back along with some new speakers. During college he built the SBC at the urging of his father, but he never got comfortable tuning the carburetor. When his friends started to get LS-powered machines, he sourced a new drivetrain from a 2001 WS6 and installed a factory 10-bolt rear.

"The car ran amazing, but I just wanted more power," Richey said. His solution was to add a turbo; he built his own setup out of reversed factory manifolds, mild steel tubing, and a T-76. Under 10 pounds of boost this combo recorded 535 rwhp.

Within a year, though, rust that had been present on the car since his initial purchase became too persistent to ignore. "I was tired of ending up with a handful of rust in the mitt every time I washed the car," Richey said. "I figured I'd find (a new body) without too much trouble, and I found a project that someone had started and never finished." One $100 eBay purchase later, Richey found himself towing home a 1985 Berlinetta hardtop roller with no rust, already in primer. He set it next to his old red car in his barn and got to work transferring his drivetrain to the new body. He smoothed out the firewall and battery trays and built a new radiator core support from scratch to give the turbo room to sit in front of the engine, and to allow easier access to the system's components. The car got a new look with vivid Plymouth Prowler orange paint and a clearcoat on top.

Richey again used mild steel pipe in the new setup, but the more efficient arrangement resulted in 585 hp using under 11 or 12 pounds of boost. Unfortunately, after about 6 months the engine started to lose power and make smoke. A leakdown test revealed problems in cylinders 7 and 8. By now you know Richey well enough to understand why he "couldn't just pull the motor and put rings in it," he joked. He gambled on a fire-damaged LQ4 from a local junkyard, but the only apparent casualty was a melted intake manifold-the block was fine. The iron block would give a margin of safety over aluminum for this non-competition car.

Deciding between another single-turbo setup and twins was a dilemma; once again the lure of the new and different swayed Richey toward two 66mm units. "I wanted everything to be symmetrical," Richey said. "The most intense part was laying everything out." He hung the turbos in mid-air using chains to help figure out how to run the piping while hiding as much of it as possible. He placed an intercooler in front of the radiator and added pusher fans on the front side of the radiator to keep everything cool. He went with stainless pipes this time; he tacked the pipes together using stainless wire before taking the components to a skilled TIG welder to finish them off.

Since completing the twin-turbo build, Richey has put about 500 miles on the car. While he's still breaking things in, he reports that it already feels faster than before. "I'm running six pounds right now," he said. "The boost definitely comes on quicker. I'm getting full boost at 2,800 rpm, where my last setup wouldn't see full boost until 3,600 or 3,700 rpm."

Despite being built for the street, Richey opted for a 10-point rollcage on the interior. "Third gen [unibodies] are notoriously weak, and if I start hooking good, I don't want everything to start creaking and popping," he said, adding that the cage makes a significant difference in how the car rides and how stiff and tight it is. The rollcage also provided a way to create easy mounting points for a fourth-gen dashboard-a conversion that would have been much more difficult using only the factory mounting provisions. A fourth-gen center console, a custom gauge arrangement, and leather-wrapped racing buckets also spruce up the interior.

As hard as it might be to believe, Richey claims that the transformation of this car is now complete. "I plan to leave it at around 800 hp because it will be a street car," he says. "The limiting factor is the factory crank, and I don't want to gamble on hurting that. [The car] is done," Richey says. "I say it now and I hope it's true. I've gotten married, got a house, got a truck, we're talking about kids ... it's time to be done. But I'll never be done with cars, and I'm not planning on selling this one."

If you've got a tech question for our resident Bow Tie Guru, we'll tell you what you need to know to keep your Chevy running right in our Techin' In With Fletch column. Go ahead and send us your questions, we'll give you the skinny on how to prep, maintain and beef up your Bow Tie!

Move over first-gens. This month we're giving the third-gen Chevy Camaro's some love in the Resto Shop department.

As factory performance started to stir from its Malaise Era hibernation, Chevrolet decided to crank out some track-ready camaros, in cluding this 1992 Chevy Camaro. Click here for more details or check out the August 2012 issue of Super Chevy Magazine.

We give a T-top third-gen Camaro some much needed stiffening and rear-suspension improvements with help from UMI Performance. - Super Chevy Magazine

Check out this 1992 Chevrolet Camaro RS. Read more only at www.chevyhiperformance.com, the official website for Chevy High Performance Magazine!

Check out this 1992 Chevrolet CMC2 Camaro that features a 1994 LT1 motor, Koni adjustables, and more. Read about it only at www.gmhightechperformance.com, the official website for GM High-Tech Performance Magazine!

Read all about Danny Judski's 1992 Chevy Camaro Z28 with has a Procharged 383 Chevy small-block. Only at www.gmhightechperformance.com, the official website for GM High-Tech Performance Magazine!