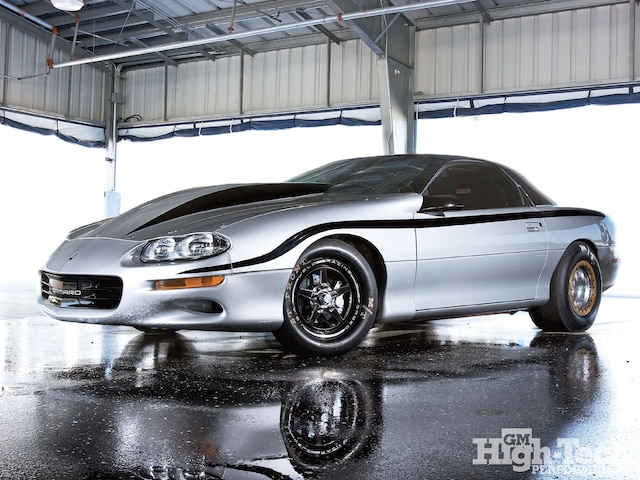 As I walked along the retaining wall at Gainesville Raceway, my back turned to the water box, I heard it long before I saw it. Over the silence of an almost empty track, somewhere in the staging lanes David Lazear powered up his '98 Camaro. Turning the key brought all eight cylinders to life, a cackling roar that could only come from a high-compression small-block. I turned and waited, camera in hand, ready to see David roll through the water box. After what seemed like an eternity, the cackle became much more intense, much louder and in the distance I saw a streak of silver and black turn onto the sticky track surface. A small blip of the throttle to wet the tires and then, in an instant, tire smoke-tons of it. Pulling up further, David lit both bulbs and laid into the throttle, bringing all 408 cubic inches up on the trans-brake, a sound that can only be described as pure bliss. As the green light lit, David dropped the hammer, simultaneously flashing the high-strung 6,800-stall converter, lifting the front wheels, and preparing to click into Second gear. As he passed me, around 330 feet out, I only had one thought; I want-no-I need that car! Nine point two seconds later, David was 1,320 feet from where he started, only now he was under the canopy of his parachute. Another successful pass in the books. That is when reality set in, I realized I could never own a car as awesome as that, I wasn't a millionaire, I didn't have decades worth of car building experience and I am way too young to be responsible for such a machine.

Of course, no one told that to the man behind the magic, 22-year-old David Lazear, owner of Gulf Coast Racing Engines (GCRE), a graduate of the School of Automotive Machinists (SAM) and builder of this All Motor monster. That's not a typo, David is 22 and by the time he hits 23, he would like to be the fastest All Motor LSX in the world. And don't think David hasn't earned all of this himself. "I started off with this car when I was 16-years old and I didn't know anything, I didn't even know how to change the spark plugs. A good buddy of mine, Joe Goodin, took me in and started teaching me how to work on cars. By the time I went off to school, there wasn't anything Joe and I hadn't touched on the car. One day, we were working on it and started talking about what I wanted to do with my life and Joe mentioned the School of Automotive Machinists and it hit me. Once there, it didn't even feel like school because I enjoyed it so much."

It was at SAM where David got the all-motor bug, working around the school's Hugger Orange SS, both on and off of the track. After graduating, David moved back to Pensacola, Florida, [his hometown] to start his own machine shop, using the knowledge he acquired at SAM to help get him going. "My personal car has seen a lot of different combinations, being a heads/cam/intake/stock bottom end to a nitrous, forged 347 to its current state as an all-motor 408." Believe it or not, the 408 combination actually came together in just 10 days, ending in a couple of all-nighters and a mad scramble to get it together. "We almost didn't make the '09 LSX Shootout, but thanks to Gabe Darveau and his late nights at the shop, we got it done." Starting with a stock GM LQ9 6.0-liter iron block, David had Wiseco build him a set of 4.030-inch high-compression pistons, which were built to bring static compression above 14.0:1. After boring the iron block, David installed the new Wisecos atop a set of GRP aluminum rods, which swing around a 4-inch Callies DragonSlayer crankshaft. To take advantage of his new rotating assembly's rpm capabilities, David ordered a set of TrickFlow/TEA 265cc 4.125-bore cylinder heads, which he immediately started modifying, tweaking the combustion chambers to fit the small 4.030-inch bore and a slew of custom port work. Never one to take the easy way out, David and Gabe decided to step up and use a set of shaft-mounted Jesel LS7 1.8-ratio rockers actuated by 1/2-inch pushrods, which meant they had to further machine the heads and block to make room for both pieces.

While David was busy finishing up the heads and installing a massive 274/292 duration, 0.810/0.810-inch lift GCRE-spec solid roller camshaft, Gabe was busy working on a new intake manifold, starting with an Edelbrock Super Victor, which he promptly cut in two and ported to fit a massive 4500-series Accufab throttle body. After hours of porting, epoxying, and shaping, the intake was finally ready to install-a step that happened somewhere between 3 a.m. and 8 a.m. in the morning, just days before the LSX Shootout. With the real trick stuff behind them, David and Gabe started getting the rest of the motor together, installing a GMPP front-mount distributor, external wet sump oiling system, and a pair of stepped [2 to 2.125-inch] American Racing Headers.

With the engine assembled and ready to rock, David and Gabe started on installing it in the Camaro, bolting it to a tried-and-true BMR K-member and a Rossler-built "Hot Street" TH400, which houses a 6,800-rpm Ultimate Converter Concepts torque converter. Yeah, 6,800, which puts into perspective just how serious the powerband on the 408 really is. From the transmission back, David's Camaro is about what you would expect from a mid-1.20 60-foot capable car with a Burkhart Chassis 9-inch rear out back, stuffed with a set of 4.56 gears and gun-drilled and star-flanged 40-spline Moser axles. The suspension is a mix of Madman and BMR with AFCO shocks and springs front and rear. After 10 days of constant thrashing, David finally got some sleep, leaving at 2 a.m. to take a nap and pick up his truck and trailer. "I got back to the shop at 8 a.m. and Gabe was just finishing everything up. I took the car to XXX Motorsports to get it on the chassis dyno. After that, we went to the alignment shop and once it was finished we all left for Memphis for testing the next day."

And as you would expect from someone who works as hard as David Lazear, the trip to Memphis went well, with David and the crew laying down a couple of great mid 9-second passes and taking home the runner-up trophy in the ERL Performance All Motor class, running the final round against his old mentor, Judson Massingill, in the SAM Hugger Orange SS. Never one to give up, David left Memphis with a plan and has already started working on a new motor combination, which will include all of the most high-tech stuff he can get his hands on. "One thing I have learned is that racing is a sick addiction that will never end for me. I would like to thank Gabe Darveau, Joe Goodin, Jake Peterson, XXX Motorsports, Judson Massingill, and Gary Bullock for all of their help along the way." In a story that certainly isn't over, we hope you stay tuned. For David Lazear and the GCRE crew, the race to the top has just begun and the best of All Motor is just around the corner.

Our readers have submitted some sweet rides for this the June 2013 edition of Readers' Rides. Check them out here!

With some help from Comp Cams, Manley, Tune Time, Thunder Racing, and MCP, we take this LS1 and bring it to the forefront of greatness, without destroying finances. - GM High-Tech Performance Magazine

R.P.M. Motorsports builds two Camaros that are as similar as they are different-one a 9-second SS nitrous car, the other a single-turbo Z28 rocket. - GM High-Tech Performance Magazine

Check out this 1998 Chevrolet Camaro that has a 408-ci LS engine. Read more only at www.gmhightechperformance.com, the official website for GM High-Tech Performance Magazine!

Check this April 2011 Readers' Rides! Featured this month is a 1998 Chevy Camaro, a 2010 SS Camaro, a 1981 Camaro, a 1967 Camaro and many others! Check them all out inside this month's issue of Camaro Performers Magazine!